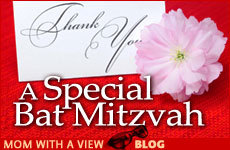 A great idea that should be part of everyone’s celebration.

I went to a Bat Mitzvah the other night, a celebration for my friend’s daughter. It was a beautiful and moving occasion, as a Bat Mitzvah should be. And perhaps it was even more emotional because the couple had struggled a Bat Mitzvah’s worth of years (as the father put it) to give birth to this child. There was extra joy in the air.

But there was something else also, something much more basic and much more important. There was gratitude.

Now we’ve all heard many Bar and Bat Mitzvah speeches. Everyone thanks their parents (right after the out-of-town relatives and a list of where they came from). Some people (not nearly enough) thank the Almighty. Sometimes it’s heartfelt. Sometimes it’s pro forma. Sometimes it’s somewhere in the middle. And sometimes it’s hard to tell if they really mean it.

But this young girl did something special and unique that clearly emanated straight from her heart. She wrote a thank you note to each of guests – before she received her gifts! Because the note wasn’t about the presents, it was an expression of what this particular attendee means to her. And it wasn’t brief, a mere line or two. It wasn’t generic. It was a few paragraphs describing the role our family had played in her life, reliving some shared experiences and memories and expressing gratitude for the very specific ways in which we had enhanced her life.

There were 115 guests (I know because I set the tables!) so you can imagine the time and effort involved. It was very impressive.

Much as we try to avoid it, most Bar Mitzvah boys and Bat Mitzvah girls get a little (or a lot) caught up in themselves. With all that focus and attention, it’s hard not to.

This is a great way to avoid the trap of self-centeredness. It’s the perfect way to teach our children about showing appreciation. It’s a powerful means of giving our children an understanding of the meaning of community, that it really does take a village.

The party was a lot of fun. The speeches were simultaneously funny and moving (we expected no less since the father is a writer). But what impacted me the most were those notes. When the rest of the evening fades, I’ll remember those kind and thoughtful missives. I was touched by what the guest of honor wrote to me and really taken with the idea.