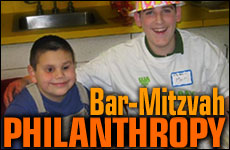 The latest movers and shakers on the philanthropy scene may now be in the middle of a game of freeze dance. Teenagers celebrating their bar and bat mitzvahs have emerged as a major charitable force -- with many giving away their monetary gifts totaling millions annually.

An eighth-grader who has severe nut allergies, Ian Callender, recently asked invitees to his James Bond-themed bar mitzvah party at the Mandarin Oriental Hotel to donate to the Jaffe Food Allergy Institute. The Upper West Side resident's request brought in $30,000. That money enabled the institute, housed at Mount Sinai School of Medicine, to purchase a new machine that helps doctors detect allergies.

Ian's family asked him to consider giving away his bar mitzvah money, and the youngster decided it should go to help other people with food allergies. "Every time I go to a restaurant, I have to ask, ‘Are there nuts in this?' and ‘Am I okay eating this?'" Ian, now 14, said. "It's been a major part of my life. I wanted to make my gift personal."

An Upper East Sider who relished his summers at sleep-away camp, Jacob Lewin used his bar mitzvah money to establish a $15,000 summer camp scholarship fund benefiting children with life threatening illnesses. In advance of her bat mitzvah, Meredith Bilski of Chappaqua, N.Y., worked with friends to raise $30,000 to start a girls' soccer team at an Israeli community center she had visited.

Last year 27 teenagers gave away a total of more than $400,000 to UJAFederation of New York charities.

New York party coordinator Harriette Rose Katz said about 30 percent of the 100-plus bar and bat mitzvahs she plans each year involve some kind of charitable giving component. Many families place "in lieu of gifts" note-cards in the invitation envelope, she said. With so many philanthropic dollars in the hands of youngsters, Jewish communal organizations have stepped up to teach children about responsible charitable giving. In August, the New York-based Jewish Funders Network launched a division that will act as "a clearinghouse of Jewish youth philanthropy" programs across the country, the division director, Stefanie Zelkind, said. Attaching a social action component to a bar or bat mitzvah celebration is not new. Through the 1980's, it was common for American teenagers to participate in "twinnings" -- bar and bat mitzvah celebrations in honor of youngsters in the Soviet Union, where religion could not be freely practiced. These days, teenagers -- often urged on by their philanthropic parents -- are more likely to give back through a combination of charitable donations and hands-on volunteer work.

Through a bar mitzvah philanthropy program called "Give a Mitzvah -- Do a Mitzvah," 27 teenagers last year gave away a total of more than $400,000 to UJAFederation of New York charities, the program's coordinator, Leslie Pappas, said. Federation staffers work one-on-one with teenagers to help the youngsters determine where their bar and bat mitzvah money will go and how they can get involved in related hands-on community service projects.

In 2006, one local "Give a Mitzvah -- Do a Mitzvah" participant raised $53,000, which paid for heating, cooking fuel and warm clothing for impoverished, elderly Jews in St. Petersburg, Russia. Another collected $52,000 to fund outdoor adventure experiences for disabled teenagers in Israel, Pappas said.

Not all families follow the same model of bar mitzvah giving. Some pay into collective synagogue -- or community-based funds -- and give their bar and bat mitzvah-age children the precocious responsibility of making grants with that money. Such a fund was established last year at Ansche Chesed, a synagogue on the Upper West Side. Bar and bat mitzvah students last year met with representatives from charities before granting $9,000 to three organizations dedicated to fighting child abuse. The synagogue also gives each bar or bat mitzvah a $180 charitable gift certificate. Teenagers then donate that money to the nonprofit organization of their choice.

"It's very easy for kids to get very big eyes and say, ‘I'm going to buy the biggest iPod that ever was,'" Rabbi Jeremy Kalmanofsky said. The synagogue's philanthropy projects teach youngsters that their coming-of-age ceremonies aren't about iPods or whatever loot their bar or bat mitzvah money can buy. "It makes it, as the saying goes, a little less bar and a little more mitzvah -- and I think that's a wonderful thing," he said.

A father of a child who recently celebrated his bar mitzvah, Hugh Pollack said the focus on bar mitzvah philanthropy helps deflect attention from the lavish parties that so often mark the occasion. "Maybe after some of the excesses got people thinking, ‘Wait, we should really take a look at this,'" Dr. Pollack, whose son donated some of his bar mitzvah money to the Metropolitan Council on Jewish Poverty, said.

Some teenagers are even using their bar or bat mitzvah money to set up 20-year charitable "Bnai Tzedek" endowments in their names. Each year, about 5 percent of that endowment is donated to a Jewish charity chosen by the teenager.

This endowment model of bar mitzvah giving was pioneered a decade ago by the Harold Grinspoon Foundation. More recently, the Springfield, Mass.-based foundation, partnering with community based Jewish groups, has helped establish 36 Bnai Tzedek programs in 26 states and three Canadian provinces.

Even a decade ago, doing a volunteer project or giving away money wasn't de rigueur for youngsters celebrating their bar or bat mitzvahs, a Bnai Tzedek director, Valerie Gintis, said. "Now, it's not just about studying with a rabbi and planning a party," she said. "Now, the mitzvah project has become part of the rite-of-passage -- part of the ritual itself."

This article originally appeared in The New York Sun