Holy Sparks #4: The Purpose of Creation 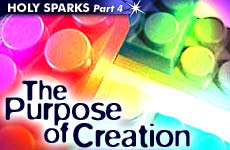 The physical world contains latent sparks of holiness, waiting for us to draw them out.

There are many ways to phrase the purpose of creation according to the Torah. However, Rabbi Moshe Chaim Luzzatto (1707-1746), in his landmark, "Derech Hashem" (The Way of God), does so precisely and succinctly:

God's purpose in creation was to bestow of His good to another... Since God desired to bestow good, a partial good would not be sufficient. The good that He bestows would have to be the ultimate good that His handiwork could accept.

God alone, however, is the only true good, and therefore His beneficent desire would not be satisfied unless it could bestow that very good, namely the true perfect good that exists in His intrinsic nature...

God desired to bestow good. God is the only true good.

His wisdom therefore decreed that the nature of His true benefaction be His giving created things the opportunity to attach themselves to Him to the greatest degree possible. For the intended purpose to be successfully achieved, means must exist through which this creature can earn perfection.

Humanity was therefore created with both a Yetzer Tov and a Yetzer Hara. A human has the power to incline in whichever direction s/he desires... The Highest Wisdom decreed that the human should consist of two opposites: the pure spiritual soul and the unenlightened physical body. Each one is drawn toward its nature, so the body inclines toward the material, while the soul leans toward the spiritual. The two are then in a constant state of battle... (Derech Hashem 1:2:1-1:3:2)

In simpler terms, the Ramchal (as Rabbi Lutzatto is often called) is defining life as a battle of the spiritual over the material. According to the Ramchal, even when we do enjoy the physical world it should be for spiritual reasons, as defined by the Torah. In doing so we become more elevated, more God-like, and more able to become attached to God -- the greatest good a person can know. This is the essence of the eternal experience called Olam Haba, the World to Come.

Though the Ramchal was a great Kabbalist, he nevertheless did not go into the Kabbalistic meaning of his words, which are far more profound than they may at first seem. He didn't refer to the Holy Sparks about which he was well aware, but, as we shall see, he did allude to them.

The Ramchal writes: "For the intended purpose to be successfully achieved, means must exist through which this creature can earn perfection." In other words, the Ramchal is pointing out what we ourselves have noticed over the ages: humanity and creation exist in an imperfect state.

Humanity and creation exist in an imperfect state.

This is so humanity can become a "partner" with God in bringing creation to its completed and perfected state. As Rabbi Shlomo Eliashiv (1841-1925), another great Kabbalist, writes:

...After, for the sake of making creation, God shone down His holy light and allowed it to emanate to the lower levels in order to elevate and separate from the sparks and "broken pieces" all that was necessary to make creation... However, the rest of the sparks and "broken pieces" that were destined for what would follow throughout history had yet to be separated, because humanity was meant to complete the rectification process through actions. (Drushei Olam HaTohu, Ma'amrei HaKlalli, 2)

For us to begin to understand this topic, we need to build an intellectual bridge between the words of these two great Kabbalists.

Imagine walking into your child's room and finding Lego scattered all over the place -- hundreds of pieces covering every square inch of floor space. Your first reaction is to scream, "Get in here and clean up your room now!" However, knowing that your children are too far away to hear you (or that they’ll at least pretend they are), you instead sit down on the floor to begin the familiar task of picking up after your children.

Only this time it’s different. This time you are moved to build and not clean up. Slowly, you take a few pieces of Lego and stick them together, as you once did as a child. Minutes pass, and you are already on your third tower for what is fast becoming the Lego International Airport.

Forty-five minutes later and cut off from reality, one of your children finally comes in looking for you. "Daddy, what are you doing on the floor?" Then, as his eyes behold your awesome creation, he asks in awe and admiration, "Who built that?!" It is only then that you see and appreciate how you took absolute chaos and turned it into something quite sensible and orderly.

That was the world of Tohu -- the chaotic state at the onset of creation (Genesis 1:2). These "broken pieces" were all over the place, just waiting to be used in some magnificent creation that would justify their existence. And that is exactly what God did: He drew out broken pieces and combined them spiritually, until physical creation came into being.

God drew out broken pieces and combined them spiritually, until physical creation came into being.

Yet God only used that which He needed to make creation, and left the rest behind for Adam, Eve and their descendants -- all created in the image of God.

Imagine you wanted to breath life into your Lego creation and make it move. In real life, it would be impossible to do so unless you could somehow wire it electronically. However, when it comes to physical creation, we see that things indeed have a life force -- from the ground from which plants grow to a person who eats them, and many things in-between.

How did the "broken pieces," even after assembly, gain their life force?

When God set out to make physical creation from the broken pieces of Tohu, He infused them with sparks, which provide life and energy, just as a spiritual soul does for a physical body. Thus, when a person uses anything in this physical world and consumes it on some level, the Holy Spark it previously harbored is released, and returns back to its source in the spiritual world from which it originally came.

And most important of all: you get the credit for doing so.

This is true for every moment of life throughout history.

THE MOST EFFECTIVE PATH

How does Torah and mitzvot fit into all this?

A person can look at Torah and its 613 commandments as a “rule book,” or you can look at it as an “instruction book for maximizing the potential of creation.” A mitzvah is not merely a test of obedience, but a message about how to best draw out and release Holy Sparks. Choosing the spiritual over the physical, about which the Ramchal spoke, is just another way of expressing one's commitment to maximizing the holy consumption of Holy Sparks.

For example, a car requires fuel to give it mobility. The same gas can be used to drive to the store to buy food for poor people, or it can be used to drive the get-away car after a bank robbery. Gasoline does not distinguish between one usage or another; it does not agree to be consumed only if used for a moral purpose.

Whether a person wants to perform a moral act or an immoral one, each requires sparks of energy to exercise his will.

The ideal purpose of using Holy Sparks is to send them back to their source Above, which can only happen immediately if they were used for a holy purpose. A spark that was "dragged" through the spiritual "filth" of impurity cannot ascend in its present state, but must go through a purification process before it can return back to its place Above.

According to Kabbalistic tradition, the purification process for a spiritually sullied spark is either a person's own sincere repentance, or the Divinely ordained punishment that comes in its place. And the latter can happen whether a person is aware of the connection or not.

Thus, when the Torah admonishes, "Choose life that you may live" (Deut. 30:19), it is really saying: Do mitzvot and use up Holy Sparks in a spiritually clean way. Become a partner with God in creation by redeeming more spiritual "Lego blocks" from the depths of Tohu, and release the sparks within them so that they can ascend Heavenward.

In this way, you become a partner with God in creation, and earn the eternal world for doing so.

This, after all, is the ultimate good for which we were created.

Snow: The Dark Side
The Promise Of The Land
Which Chat Are You On?: Parshas Behar/Lag Ba’Omer
Do You Like Slow-Cooked Food? Thank the Jews
Comments
MOST POPULAR IN Spirituality
Our privacy policy