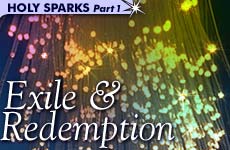 Why have Jews been scattered to the four corners of the earth?

In order to properly understand the meaning of exile and redemption from a Jewish perspective, one must go back to the deepest roots of history, specifically to the second verse of the creation story:

The earth was null and void and there was darkness upon the face of the deep, and the spirit of God hovered above the water. (Genesis 1:2)

For, with respect to this seemingly uninformative verse, the rabbis have written a very insightful explanation:

Within this single and ominous verse, there is an allusion to all four exiles that the Jewish people were destined to experience throughout their long history until the Messianic time, which has still yet to occur. And without exception, all of them have come to pass as predicted, with the final exile, the "Roman Exile" still in progress.

The question is: Why does this verse describing primordial chaos so strongly allude to the future exiles of a people which, at the time, had yet to exist? What connection is there between this dark and incomplete stage of creation and the concept of exile and redemption?

THE CONCEPT OF HOLY SPARKS

The concept of "tohu," the Hebrew word for "null," is a deeply Kabbalistic one. Even though it is mentioned in the second verse of the creation story, it is really a description of the pre-creation state (Zohar, Genesis 15a), which was a combination of a certain spiritual matter from which creation was made, and Holy Sparks (Nitzutzei Kedusha).

What is a Holy Spark? Holy Sparks are like the spiritual fuel of creation, and nothing can exist or function anywhere in the universe without a Holy Spark. These are, in a sense, spiritual packets of God's Holy Light, that actually represent the constriction and filtering of that Light. Without this constriction and filtering, physical creation could never exist, because God's Light would remain too intense for anything physical to contain It. Thus, the more Holy Sparks something possesses, the holier it is and by definition the more life it has.

These are spiritual packets of God's Holy Light, constricted and filtered.

There is not an infinite amount of Holy Sparks in creation. In fact, history is measured by these sparks, and will come to a close when all sparks have been drawn out of the tohu and returned to their holy source Above. It is then -- once all the sparks that God has made available to mankind are expended -- that by definition the Messianic Period must begin.

How does one use up Holy Sparks? Through the learning of Torah and the performance of mitzvot, Holy Sparks are redeemed, purified, and ascend to Above. Indeed, transgressions also use up Holy Sparks, but in the process the sparks themselves become defiled and require "cleansing" before being able to ascend. The cleansing process comes in the form of either sincere repentance by the transgressor, or through Heavenly-ordained suffering.

Since Torah and mitzvot are the most effective way to utilize Holy Sparks, the nation in possession of Torah and mitzvot becomes the most effective one to complete this process. Thus it is primarily the responsibility of the Jewish people, who accepted Torah at Mount Sinai in the year 2448 from creation (1313 BCE), to redeem the sparks of creation. This is the deeper meaning of the famous exhortation to be a "light unto the nations" (Isaiah 42:6).

As long as the Jewish people remained committed to this process, as evidenced by their commitment to Torah and mitzvot, then God arranged for all relevant sparks to be brought to the Jewish people in the Land of Israel. For example, during King Solomon's time (9th century BCE), nations came from far and wide to witness the great wisdom of this famous Jewish king, bearing great gifts.

Within the many gifts and sacrifices that were brought to the land were Holy Sparks from different parts of the world. Used and enjoyed in the Land of Israel, these sparks were redeemed and returned to their place Above, thus furthering the cause of history. In turn, the exposure to Jewish wisdom resulted in other nations adopting Torah philosophy and practice, thus using up sparks through their actions as well.

However, in spite of this great success, the Jewish people eventually lost appreciation of their role in history and how easy God had made it for them. This was evident through their laxity in the learning of the Torah and performance of mitzvot, which resulted in defilement of the Holy Sparks.

Upon seeing this, God told the Jewish people: "If you don't appreciate how I’ve been bringing the sparks to you for redemption, then I will send you out to get them yourselves -- at your own peril!"

This is the essential concept of exile and its role in Jewish history. This is why the second verse of creation (which describes these sunken Holy Sparks) is also an allusion to the future exiles of the Jewish people, and to their eventual redemption.

When sparks in one location are spent, the work of the Jewish people in that area is complete.

Not only is it complete, but the Jewish people have no business there anymore. This is what the Torah says regarding Egypt:

[The Jewish king] must not accumulate many horses, so as not to bring the people back to Egypt to get more horses. God has told you that you must never again return on that path. (Deut.17:16)

Why not? Wouldn't it be the most realistic Passover experience to go back once again and visit the place of the slavery of our forefathers, to tread in the footprints of Moses, and make a Seder where the very first one was celebrated?!

Indeed, we have witnessed the fulfillment of the prophecy:

The Jews will have gone to just about every corner of the earth to redeem those sparks, before the only place left to go is home -- to the Land of Israel. Thus is the prophetic Final Redemption.

It shall come to be on that day that the Lord will once again show His hand... And He will gather in the dispersed ones of Judah from the four corners of the earth. (Isaiah 11:11-12)

Why does life and history come down to Holy Sparks and their redemption? And even if it does, where does anti-Semitism fit into the picture? And, if it does mean going to the "four corners of the earth," does that mean we may have to one day move on to places like Antarctica (brrrr)? We will address these questions in coming installments of this series, "Exile & Redemption."

Holy Sparks #2: The Contractor Who Couldn't Say Good-Bye
Is Grease the Word?
Dried Fruit Compote
Scientific Curiosity and the Divine Encounter
Comments
MOST POPULAR IN Spirituality
Our privacy policy
Aish.com Is Looking for Great Writers