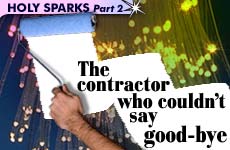 Nobody wants to overstay his or her welcome. Jacob spends just enough time in exile to gather the sparks.

Imagine hiring a contractor to renovate a part of your house. The first day of work is an exciting day, and in anticipation of his arrival you get up early and even have coffee prepared to start the project off on the right foot.

As work progresses, you probably have stopped with the fresh coffee, but you still anticipate the arrival of the contractor and his crew because now you can't wait for the work to be completed, wondering, "How much longer with this work shlep on for?" You long for the day when you’ll once again enjoy privacy and a clean house.

Finally, at long last, the renovation is complete. You have even paid the entire fee, satisfied with the work that was done. It had taken the contractor longer than originally anticipated, but that is now forgotten as a thing of the past.

That is, until something strange happens.

All of sudden, early the next morning, you hear a familiar car engine. You tell yourself that it is only a coincidence, or your imagination after so many months of hearing the same car pull into your driveway around the same time. Convinced, you put your head back down on the pillow to sleep a bit more.

A minute later the doorbell rings. You can't believe it. Who could be at the door at this time in the morning? You look out the bedroom window and sure enough, that same car is in the driveway. The contractor is back.

You quickly get dressed and go downstairs, wondering what the contractor left behind or forgot to do that brought him back unannounced.

I like the coffee and thought I'd stay here a while longer.

"Good morning," you say, trying to sound unfazed seeing the contractor looking as if he was ready for another complete day of work. "Did you forget something?"

"Um ... then why are you here this morning?" you ask, wondering if it's just a bad dream.

"You know," the contractor casually says, "I've grown to enjoy being here. I especially like the coffee. You make the best coffee, and I thought to stay here a while longer."

Stunned, you can only say, "What?" as you wonder about the sanity of the man standing before you. Though he had never exhibited too unusual a behavior in the past...

You politely make him a cup of coffee, and anxiously send him on his way, hoping not to see him again. But when he returns to your house, day after day, it is a terrible nuisance. You even begin to regret the renovation work he did for you.

And eventually, you have no choice but to call the police and lodge a formal complaint.

NOT JUST A PARABLE

As strange a story as this may seem, it has been happening in real life for thousands of years. In fact, it is the history of the Jewish people -- the contractor in the story.

Within the parable is a mystical explanation for anti-Semitism, something which defies most physical explanations by its very nature, timing, and severity. Anti-Semitism is the result of our staying on after the "job" is finished -- the job of redeeming the sparks of exile.

As discussed in part one, the Jewish people are sent to a place in the world to redeem the sparks there. As we undertake that work, consciously or not, our quality of life improves to allow us to go about our business. Sometimes the struggle may continue because the sparks in a particular place require extra self-sacrifice to be drawn out. However, often life does improve and may even result in acceptance by our non-Jewish hosts.

Anti-Semitism is Heaven's way of letting us know that one exile is coming to an end.

It may not necessarily mean that the hosts truly like us, as we have found out through history, and as we have misunderstood for millennia now. It means that, for the time being, history is riding a wave while we reach the golden era of the present exile. Whether we are learning Torah, going to work, or punching keys on a computer keyboard, it is all about redemption of Holy Sparks.

However, like the renovation work in the story above, all exiles must eventually come to an end; the limited amount of sparks expected to be redeemed demand it. And, like the contractor in the story above, if we leave at just the right moment, then not only do we get paid in full, but the "client" sends us off with a gracious thank you and a pleasant smile.

However, if we overstay our welcome, then the face of our host changes and makes life less comfortable. Anti-Semitism, in other words, is Heaven's way of letting the Jewish people know that the present job -- exile -- is coming to an end.

There is a wonderfully clear and forthright example of this very idea.

Of all the forefathers, Jacob's life was the closest to being the prototype for the lives of the Jewish people. If the phrase ma'aseh avot siman l'banim -- "the events of the elders are a sign for the children" -- applied to any of our ancestors, it is to Jacob.

In so many cases, when we try to understand how to deal with our present, we look for answers in Jacob's past. What he did, how he acted, how he responded is always an insight into how we, his descendants, should respond in similar situations, especially while in exile.

As the Torah records (Genesis 28), Jacob impersonated his evil brother Eisav and took the blessings from his father Isaac. Jacob was forced to flee home and seek refuge outside of Israel, in Padan Aram (Mesopotamia) in the house of Lavan (“the white house”), his mother's brother. There he married and worked for 20 years while waiting to receive word from his mother that it was safe to come home once again.

A righteous person like Jacob would have had to have asked the obvious question, "Why me?" He would have wondered why Divine Providence pushed him away from home to a foreign land, to live with the greatest and most dangerous trickster of the time (even if it was his uncle).

Jacob understood that everything was just a way to redeem the sparks outside the Land.

And as one of the most righteous people of all history, a man who is said to have used every moment in service of God, Jacob would have known the answer: to redeem sparks. Jacob would have understood from the outset of his journey that everything that had transpired, from the purchasing of the birthright, to the incident of the blessings, was just a way to go where he otherwise would not have gone, to redeem the sparks outside the Land, and to move history that much closer to fulfillment.

For, as the Arizal teaches, although Lavan was evil, he had some good traits and so did the land upon which he lived. However, Jacob's presence there drew out most of that good and kept doing so -- as long as Heaven maintained the status quo, which last for 20 years. In the 20th year, things began to change, as Jacob himself noticed:

Jacob saw the face of Lavan, and behold, it was not towards him as before. God said to Jacob, "Return to the land of your fathers and the place of your birth, and I will be with you." (Genesis 31:2-3)

Maybe Lavan had just been having a bad day? Maybe he wasn't feeling well? Maybe he'd feel better tomorrow and smile the same way he always had?

Maybe. However, Jacob understood only too well that Lavan's treatment of him and his family was completely a function of Divine Providence. As the Passover Haggadah reminds us, "An Aramean tried to destroy our father," and would have had not God protected Jacob, as he declares as well:

You know that I worked for your father with all my strength, and that your father cheated me and changed my wages 10 times. However, God didn't let him hurt me. (Genesis 31:6-7)

And even Lavan was forced to admit in the end:

I have the power to harm you. However, the God of your father spoke to me last night and told me, "Make sure not to speak to Jacob either good or evil." (Genesis 31:29)

Jacob's reason for staying in Padan Aram had dissipated with the sparks themselves.

Therefore, from Jacob's point of view, Lavan's slightly less-friendly-than-usual appearance had great significance, even if the result of a bad breakfast that morning. He took it as a sign from Heaven, signaling the end of a 34-year exile (14 years studying in the yeshiva of Shem and Ever, and 20 years in Lavan's home). The sparks that Jacob had been sent to redeem had been taken; his reason for staying in Padan Aram had dissipated with the sparks themselves.

This brought him a clear recognition of the hand of God, for then God spoke to him directly and confirmed his plans. And it saved him having to witness what Lavan could really be like, should he overstay his welcome.

The moral of the story? When the sparks we are sent to redeem are at their end, the "face" of "Lavan" will change toward us, ever so slightly at the beginning, and more so as we overstay our visit. Like our great and devoted forefather before us, we must ride on top of the wave of redemption, and not be caught perilously inside it.

Next: Why sparks at all?