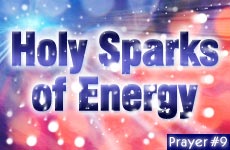 The holy sparks of spiritual energy, embedded in the physical, animate the universe and fuel redemption.

Many blessings in the Shemoneh Esrai, the silent standing prayer that forms the heart of the prayer liturgy, are in the present tense, even though it seems they ought to be in the future tense.

The Kabbalah explains why.

Resurrection is not only applicable to the future, for the time of the Messiah, and redemption is not an all or nothing thing. According to our mystical tradition, every time a soul reincarnates into a new body, it is also called a "resurrection," and it prepares the soul for the final resurrection of the dead of the future.

Furthermore, every time a "holy spark" -- the spiritual life force of all aspects of creation -- transitions from one form to another, this is also called "resurrection," according to Kabbalah.

To understand this concept better, we need to first better understand the concept of a "spark," or, nitzutz, in Hebrew.

In the physical world, nothing moves without energy being expended, including human beings. In order to move and to act -- indeed, in order to live -- human beings require a source of energy, which we often think of as food. We believe that just as gasoline combustion makes it possible for a car to move so, too, is it the combustion of food that animates humans.

However, it can't be the food alone that allows human beings to live, for even if you were to feed the healthiest and most energizing food in the world to a dead person, he would not come back to life; it wouldn't change his status even a little bit.

If you were to feed the most energizing food to a dead person, he would not come back to life.

Why not? Because the soul is gone.

Thus, the Kabbalists explain, it is not the food per se that gives man life and energy, but, the "soul of the food" -- a spiritual "packet" of energy "clothed" within the food -- that feeds the soul, which gives the body life. If there is no soul inside the body to receive and extract the sparks from the food, they can't give the body life.

We call these "packets" of spiritual energy "holy sparks," and it was to these that Moses referred when he said:

So that He (God) could teach you that man does not live by bread alone, but by whatever God says should exist does man live. (Deut. 8:3)

The concept of sparks also explains Moses could be on Mount Sinai for 40 days and 40 nights -- and not eat anything! God fed Moses the necessary spiritual energy he needed to maintain his life without the "clothing" of food. Moses received his sparks directly from the mouth of God, so-to-speak.

So now we know that we need sparks to live, and we know that the sparks come from food. But where does the food get the sparks from? And where do these sparks go once we're finished with them?

To answer this question, we need to introduce another concept -- the four levels of existence, which are (from the lowest to the highest):

To begin with, since each of these worlds are interdependent, they represent a chain of sorts through which the sparks can pass on the way back to their source in the spiritual world above.

The goal of creation is to get all the sparks back to their source above, and, according to Kabbalah, once we do, history as we know it comes to an end.

At just the right moment in time, God allows the sparks to "enter" creation, according to a historical timetable that really only He understands and oversees.

This is why trends often just "suddenly" begin in different places in the world at the same time.

This is why events occur when they do in history, and why trends often just "suddenly" begin in different places in the world at the same time -- even though people worked independent of one another! It is because of the sparks that God "injected" into creation at that precise point in history.

The cycle begins at the lowest level, the inanimate or mineral World, which God has arranged to be the starting point of the sparks.

Feeding on the mineral world, a plant (wheat, for instance) may grow, absorbing into its being the sparks that were once in the mineral world which nourished it. At that stage, a cow may come and eat the wheat, or, maybe a man himself may cut down the wheat and prepare bread from it. Whoever gets to the wheat first will get the sparks first.

If the cow gets the sparks first, then they will remain with the cow until something is done through the cow to further the cause of creation. That often means a human being eating the cow, and, the holier the cause for eating, the greater the elevation of the sparks within the meat. If man eats the wheat before the cow, then, the sparks will have skipped a link in the chain, and world rectification can happen that much faster.

Now we can return to the point with which we started -- the concept of resurrection.

Until the spark enters the "chain" and begins its spiritual journey upward, it is as if it is dead to the world. It simply lies in waiting, until the appropriate, Divinely-determined moment that it should enter creation and be available for rectification. Perhaps supplying the energy to do a mitzvah -- the ultimate and most efficient use of the sparks.

And, when it makes that fateful move into the "clothing" of the physical world, it is as if it has been brought back to life, resurrected, so-to-speak, from the dead. According to Kabbalah, it is this reality that the present-tense usage in this blessing alludes.

Incidentally, this concept of sparks undergoing a process of refinement is the Kabbalistic reason why redemption is also always the result of a process that occurs over time.

In a sense, the sparks are like grains of sand in an hour glass.

In a sense, the sparks are like sand in an hour glass: when all the grains of sand have passed from the upper chamber of the glass to the lower chamber, we know that one hour has passed. In this case, the "glass" is upside down -- when the sparks pass from the Lower World to the Upper World, we know that exile has come to an end, and, that redemption has arrived. This will manifest itself in the physical reality, in that events will begin to occur in such a way as to indicate that redemption is at hand.

For example, the process of redemption from Egypt ten months began in advance of the actual Exodus, when the first plague came upon the Egyptian people. A few months later, around the time of Rosh Hashanah, not one single Jew remained enslaved, as each subsequent plague further destroyed the once-mighty Egypt.

The following Nissan, the Jewish people actually left Egypt. Although they had left in haste, it had been a redemption that was a long time in the making, and, one that evolved over time -- as the sparks necessary to fuel that redemption were allowed into creation and refined. That was how redemption occurred then, and that is how it will occur in the "End-of-Days" as well, as the final remaining sparks are "consumed" and refined, and returned to their source above. And, there is no way to do this more effective than learning Torah and doing mitzvot.

Perfectly Imperfect: The Secret of the Shofar

Praying with Fire Part 1
The Blue Beyond
Great Place to Live
Is Eating Supposed To Be Spiritual?
Comments
MOST POPULAR IN Spirituality
Our privacy policy