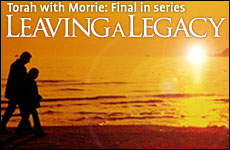 Death ends a life, not a relationship.

Morrie Schwartz knew that his days in this world were dwindling. He would finally succumb to his amyotrophic lateral sclerosis (ALS), Lou Gehrig's disease, a fatal and ruthless illness of the neurological system. He also knew that his friend and student, Mitch Albom, was not prepared to face this reality. Morrie spoke to Mitch about his impending death and how Mitch could handle it:

"I've picked a place to be buried....Will you visit?... Just come and talk. Make it a Tuesday. You always come on Tuesdays. We're Tuesday people... You'll come to my grave? To tell me your problems? . .

He closes his eyes and smiles. "Tell you what. After I'm dead, you talk. And I'll listen...

"As long as we can love each other, and remember the feeling of love we had, we can die without ever really going away. All the love you created is still there. All the memories are still there. You live on-in the hearts of everyone you have touched and nurtured while you were here... Death ends a life, not a relationship."

The Midrash states this concept:

"God said to Moshe, 'Behold your days are coming close to die' (Deut. 31:14). Do days die? Rather, it comes to teach us that when righteous people die, it is only their days that die. They themselves live on for righteous people, even in their death, are called alive!" (Medrash Tanchuma, V'zos HaBracha).

Death is real. When a person permanently stops breathing and the heart stops beating, there is no turning back. What then is meant by the statement 'righteous people, even in their death, are called alive'?

As long as a righteous person's children, students, and friends are continuing his legacy, he is considered alive. As long as there are people who are alive that perform actions and achieve morality and piety as a result of the inspiration and spiritual heritage that a good person bequeathed, the tzadik, the virtuous person, is still alive (Rashba in Ein Yaakov on Taanis 5b).

This is what the Talmud means when it says, "Any Torah scholar who has his Torah statements quoted (after his death) is considered as if his lips are moving in the grave" (Yevamot 97a). For example, Rashi, the foremost Biblical commentator, has 'his lips moving' constantly due to the millions of Jews who have studied his words throughout the ages. His legacy has been alive and well for a thousand years even though he physically left this world long ago.

My rabbi, Rav Yaakov Weinberg, of blessed memory, died in 1999. Rav Yaakov once told me that having one primary rabbi as your central teacher and guide doesn't mean staying nearby the rabbi your entire life. It means taking the rabbi and his guidance and insight with you wherever you go. Your entire life is lived with your rabbi by your side. You will think of the wisdom he provided and utilize and apply it throughout your life. Having a rabbi means taking him with you.

I can personally testify that barely a day has gone by without my thinking of something I have learned from Rav Yaakov and applying it to my current situation. In this way, my relationship with Rav Yaakov has never really died.

"When I die, give what is left of me to children. If you need to cry, cry for your brothers walking beside you. Put your arms around anyone and give them what you need to give me. I want to leave you with something, something better than words or sounds. Look for me in the people I have known and loved. And if you cannot live without me, then let me live on in your eyes, your mind and your acts of kindness. . .Love does not die, people do." (John Wayne Schlatter, a 2nd Helping of Chicken Soup for the Soul, page 167)

We can all continue 'living' even after we are dead, as long as we leave a legacy of righteousness. As Morrie said so well:

"You live on -- in the hearts of everyone you have touched and nurtured while you were here... Death ends a life, not a relationship."

This is the last installment of 'Torah with Morrie'. I have enjoyed your support for almost a year and I wanted to express my gratitude to you. We have learned a tremendous amount from this entire series. May we always derive great Torah insights from everything we read and from everything we experience.

God Loves You – Do You Love Him?

If There's a God, Why Is There Suffering?