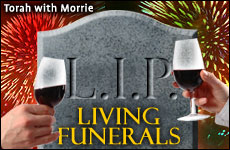 Why wait for a funeral to give heartfelt praise about those you love?

Living in modern times presents numerous challenges. One of these is maintaining positive feelings toward others. We are endlessly swamped with a media that has become super-critical, cynical, and judgmental. When was the last time you read of a major news piece about something that someone did right?

Yet, there is one occasion we all experience when our reaction toward others is unstintingly positive. Sadly, that event is at a funeral.

Some of the most precious and meaningful words that have ever been uttered about human beings have occurred at eulogies and funerals.

Every death is a painful tragedy but an additional sorrowful element is the fact that so many of us leave funerals and houses of mourning thinking, "I wish I would have told him how special he was to me when he was alive."

Morrie Schwartz, the main protagonist of Tuesdays with Morrie, was determined not to let that happen to him:

"The New Year came and went. Although he never said it to anyone, Morrie knew this would be the last year of his life. He was using a wheelchair now, and he was fighting to say all the things he wanted to say to all the people he loved. When a colleague at Brandeis University died suddenly of a heart attack, Morrie went to his funeral. He came home depressed.

"What a waste," he said. "All those people saying all those wonderful things, and Irv never got to hear any of it." [Author's note: Jewish tradition does maintain that the soul of the deceased is present at a funeral and hears all that is spoken about him. Still, hearing praise at one's own funeral certainly does not compare to hearing it when alive.]

Morrie had a better idea. He made some calls. He chose a date. And on a cold Sunday afternoon, he was joined in his home by a small group of friends and family for a 'living funeral.' Each of them spoke and paid tribute to the old professor. Some cried. Some laughed. . . . Morrie cried and laughed with them. And all the heartfelt things we never get to say to those we love, Morrie said that day. His 'living funeral' was a rousing success."

A living funeral is an interesting concept for someone who is terminally ill. Even better is to train yourself to see the good in others while they are healthy, and give sincere and meaningful compliments and praise.

Giving compliments begins with creating a positive mindset concerning others. This means giving all people the benefit of the doubt and searching for their qualities. As the Mishna states: "You should judge everyone favorably" (Ethics of the Fathers, 1:6). In doing so, we emulate God.

God finds the good in all people's actions, cherishes and stores them. The Talmud tells us:

"The verse states: 'If there is a defending angel, one among a thousand, to declare a man's righteousness, then God finds favor in him.' (Job 33:23)… .And this applies even if that one defending angel discusses 999 aspects of a person which are bad but finds one positive virtue." (Shabbat 32a)

Once we look at others in a positive light and we discover their qualities, extol their wonderful traits and encourage them:

"It is a commandment on every person to love his fellow Jew as he loves himself, as the verse states, 'Love your neighbor as yourself.' Therefore, we must speak of another's praise…" (Maimonides, Laws of Character Development, 6:3)

We all know how good it feels when someone commends us for our accomplishments. In fact, sincere verbal applause can be worth much more than offering someone a financial benefit:

"One might give his friend all kinds of presents, but if his demeanor is sour when he gives, it is as if he gave nothing. But if you give your friend a good feeling and positively reinforce him, even if you did not give him a tangible object, it is considered as if you gave him everything." (Avot of Rav Nosson, Chapter 13, paraphrased)

Even a smile and a kind word cultivate an undernourished self-image:

"Better to whiten your teeth (smile) at your friend than to give him milk (even if he's very thirsty)" (Talmud Ketubot 111a).

When we encounter someone, we can ask ourselves, "What can I say to this person that will leave him feeling a little better about himself? What are his qualities?"

Be generous and energetic with praise. Genuine compliments can alter people's lives in allowing them to realize and actualize their strengths. Sincere acclaim provides the beneficiary with renewed vigor and drive to carry on despite adversity. Giving someone a compliment is an act of love; it's a gentle way to stroke their sense of self worth and restore the soul.

Get into the habit of looking for good qualities in others and complimenting one or two people every day.

Of course we should avoid false flattery which is almost always detected anyway. As the Jewish maxim says, "Words that come from the heart, penetrate the heart."

When we give compliments, we feel great as well. We're connecting openly, directly, and thoughtfully with another human being, fulfilling one of our basic needs.

Try to make complimenting a habit. Look for good qualities in others and compliment one or two people every day. We can tell our spouses how good they look and mean it. We can thank them for making a great supper or for taking care of the bills. We can describe to our kids how great they are when they play nicely with their friends. We can thank our parents for all the little things they do for us. We can let our employees know that they have done a fantastic job. We can even tell our bosses how nice it is to work for them (hopefully!).

So the next time we have something nice to say about someone, don't wait -- say it!

Can God Create a Rock He Can’t Pick Up?

The Importance of Silence in Jewish Thought

The Tsunami and God
The Miami Boys Choir is Taking over TikTok
Caramelized Onion and Pumpkin Pirozhki
For Every Individual, A Torah Scroll
Comments
MOST POPULAR IN Spirituality
Our privacy policy
Aish.com Is Looking for Great Writers