Shavuot: Nexus between Man and God 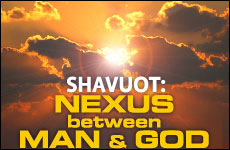 How Shavuot and its parallel facets of meaning represent the intertwining of God's omnipotence with man's free will.

The Torah also allocates a specific point in the agricultural cycle for each holiday. Passover is the sprouting of the grain, Shavuot is the cutting of the crop, and Sukkot is the gathering in of the crop.

The various parallels of Passover and Sukkot are not difficult to match up. Passover is the nascence of the Jewish people, and as such it is the blossoming of the crop. Sukkot is the destiny of the Jewish nation marching towards the Land of Israel, their final destination. As such it parallels the final ingathering of the grain to its 'home', i.e. the silo.

How does the agricultural midpoint of "cutting the grain" correspond to the giving of the Torah?

To understand the quality of this moment in the agricultural cycle, we must touch on the theological issue of God's omnipotence and man's free will.

Judaism demands from us both a very strong sense of personal accountability and at the same time an acknowledgment of God's totality. We are enjoined to do good as if it all depended on us, yet we pray to God with a sense of utter human frailty. We must push ourselves to the utmost, but never lose sight of the omnipotent God.

If man were to live with only a sense of God's omnipotence, he would shirk his duties, adopting a fatalistic attitude of "what's the point of it all", and accomplish naught. If on the other hand he were to only see his own endowed capabilities, he could become arrogant and selfish. What usually happens is that we end up tilting emotionally towards one perspective or the other, depending on the particular circumstances.

This paradox is one of the great theological issues, namely free will vs. Divine omniscience. Which ever way we choose to answer this intellectually, on the practical level we live with both understandings as being true, each utilized in its proper application.

This division of duties -– of assuming the mantle of responsibility while simultaneously believing everything is from God -- expresses itself most blatantly during the agricultural growth cycle. From when the seed is first planted until it is cut, it is God who is solely involved in its development. The act of "cutting the grain" then begins man's role in processing it: threshing, winnowing, sifting, grinding etc. He is the one whose action converts it into edible food.

At that critical junction of putting the scythe to the stalk, the grain moves from the domain of God's providence into the realm of human responsibility and capability.

A similar bridge between two domains expresses itself at the moment of the giving of the Torah. Before the Torah was brought down from the heavens, the world was the mirror of God, who was the sole Creator and Master. It has been pointed out that the number of generations from the beginning of the world until the giving of the Torah is 26, which is the numerical value of God's ineffable name, connoting that all those generations lived only as an expression of God's benevolence. They did not have a clear mission which would define them as self-deserving of existence.

However, once the Torah was given to the Jewish people, man is charged with a mission. He is responsible for the keeping of the Torah and enacting its moral code. It is up to him to build or destroy the world.

Even at Creation there is a hint of man's role to come. The sixth day of creation is written in a way that hints at the sixth day of Sivan when the Torah will be given. The rabbis teach us that God's creation of the world was conditional on man's future acceptance of the Torah. It may have all been God's doing, but it depended on man as its raison d'etre.

This intertwining of God and man is true with regard to all moral accomplishments, but most strongly brought home by Torah study itself. Nothing is closer to a person's sense of self than his faculties of reason and comprehension. Yet when we study Torah we need to be fully aware of the two truths, simultaneously. We cannot be said to be studying God's word unless we are firmly convinced and believe that the ideas we struggle to understand are God's Divine wisdom. Yet, if we do not fully comprehend them with our own mind and understand it with our words and our mind, we have also not fulfilled our obligation for Torah study. If God's words have not genuinely become our own words, we have yet to receive the Torah.

We are holding in one hand the stalk of God's bounty, and in the other hand the scythe of human endeavor.

This, then, is the magnificent holiday of Shavuot. It is the day that God passes the Torah to man, so to speak, and man becomes the bearer of responsibility for the world. The world rises or falls on the weight of man's accomplishments, instead of the sheer benevolence of the Almighty. This is why the cutting of the crop is chosen as the precise moment to mark Shavuot. We are holding in one hand the stalk of God's bounty, and in the other hand the scythe of human endeavor.

Furthermore, God has given us the opportunity to be a part of His wisdom so that the same idea belongs to both God and man, at one and the same time.

How appropriate that this is the holiday we would bring the first fruits to God when we had the Temple. While the fruit is still growing, it is obvious to all that it was in God's hands; there is no need to demonstrate our awareness at this point that our bounty is a gift from the Almighty. If we were to wait much longer after the harvest, we would likely have gotten used to the notion that it is 'ours' and thanking God would be belated and perfunctory.

It is at the precise moment of laying a scythe to the crop –- at "the cutting of the grain" -- that we stand at the nexus of these two forces and are able to correctly convey our gratitude. We recognize man's responsibility and God's benevolence at one and the same time and genuinely acknowledge that even that which is the fruit of man's labor is ultimately God's.

Let us then celebrate the night of study on Shavuot in the spirit that it was given. We will study Torah with the imperative that only we have the ability to know right from wrong, and if we will not set the world right no one else can. And let us study the words of the Torah with the appropriate humility that all our intellectual struggles are there but to understand a sliver of God's infinite wisdom.

Judaism’s Unique Claim: National Revelation
Should I Break Up, Get Engaged or Keep Dating?
Time Is Your Precious Commodity
A Constant World in Flux
Comments
MOST POPULAR IN Shavuot
Our privacy policy