By What Right Israel? 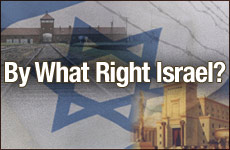 Israeli ire over President Obama's historic address to the Arab and Muslim world in Cairo last Thursday centers more on what he didn't say than what he did.

At first hearing, Jews around the world should have been gratified by President Obama's strong repudiation of Holocaust-denial, which is rampant in the Arab world: "Six million Jews were killed -- more than the entire Jewish population of Israel today. Denying that fact is baseless, ignorant, and hateful."

Some Israeli columnists decried what they considered the moral equivalency of the Holocaust to "Palestinian suffering," but the juxtaposition of these two subjects points to a much more egregious -- and dangerous -- viewpoint. As almost all the Israeli media analysts point out, by mentioning the Holocaust while failing to mention the Jewish people's "historical and religious rights" to the Land of Israel, President Obama was swallowing whole the Arab narrative. The Arab version of the Jewish presence in the Middle East is that European guilt over the Holocaust prompted the Imperialists to give the Jews their own state. As Imperialists are wont to do, they gifted the Jewish people a chunk of land that they had no right to give away because it really belonged to the Muslims.

If Muslims can claim that the Holocaust never really happened (Palestinian Authority head Abu Mazen wrote his Ph.D. thesis denying the Holocaust), one can imagine how insistent they are that a thousand years of Jewish sovereignty in the Land of Israel in ancient times never happened. Once, as I passed an overlook with a view of the Temple Mount, I overheard an Arab tour guide telling a European tour group, "The Jews claim that their two temples stood on this spot, but there is no historic or archeological evidence to their claim."

Of course, the Arab tour guide (as well as the official websites of Egypt and other surrounding Arab states) was lying. Countless historical and archeological proofs bear witness to Jewish sovereignty in the land of Israel from 1200 B.C.E. until the Roman exile in 70 C.E. (with a hiatus of 70 years during the Babylonian exile). Even after the Romans forcibly exiled most Jews, a significant Jewish population remained in northern Israel until the Arab conquest of the 7th century. Only willful ignorance can deny the veracity of the Jewish people's history in the land of Israel.

Jews cannot snack on cookies without thanking God for the Land of Israel and pleading to return there.

Forcibly exiled from the land, at no point did the Jewish People relinquish their claim to the Land of Israel (which the Romans renamed "Palestine," referring to the Jews' ancient nemesis the Philistines, as a way of punishing the Jews for their rebellion). On the contrary, every day, three times a day for the last 2,000 years, Jews have prayed, "Gather us together from the four corners of the earth to our land," and "Return to Jerusalem Your city, as You have promised, and build it speedily in our days." Whether dining in London, Dallas, or Sydney, Jews conclude their meals with a grace that includes, "We thank You, the Lord our God, that You have bestowed on our forefathers the inheritance of the precious, good, and spacious land," and "Rebuild Jerusalem, the holy city, speedily in our days." Jews cannot snack on cookies without thanking God for the Land of Israel and pleading to return there. And the Passover Seder, of course, ends with the plea: NEXT YEAR IN JERUSALEM!

The entire Muslim claim to the Land of Israel is that they occupied it from the Arab Conquest in 634 through a succession of other Muslim military conquests (Syrian, Egyptian, Mamluk, and Ottoman Turks) until the British conquest in 1917 (except for the one century of Crusader rule). But the Jews, under Joshua, began the conquest of the Land of Israel in 1272 B.C.E., nineteen centuries before Islam even existed. For Arabs in 2009 to repudiate the Jews' right to the land because "we were here first" (meaning before the massive Jewish return of the 20th century) is ludicrous given the historical reality that we, the Jews, were definitely "here first."

OUR RELIGIOUS RIGHT TO THE LAND

As for the Jews' religious right to the land, it is clear-cut and simple: God bestowed the Land of Israel on the descendents of Abraham, Isaac, and Jacob, a promise God repeats many times in the Torah. God's creation of the world means that He can give any piece of it to whomever He chooses.

In fact, this is how the famous commentator Rashi began his classic commentary on the Torah. Living in France in the 11th century, a millennium after the Jews had lost sovereignty over the Land of Israel, Rashi posed a question: Why did the Torah, which is a book of commandments, begin with the Creation of the world, when it should have begun with the first mitzvah? Rashi answered that the Torah begins with the Creation only to bolster the Jewish claim to the Land of Israel. He wrote: "If the nations of the world should say to Israel, ‘You are robbers, because you have seized the lands of the seven nations [of Canaan], Israel should say to them: ‘The whole world belongs to God. He created it and He gave it to whomever He deigned to give it.'"

This is the heart of the Jewish claim to the Land of Israel. This is why the post-Zionists, who have jettisoned Jewish faith, waffle in asserting Jewish rights to Israel.

The stark truth is that the Land of Israel belongs to the Jewish people because God gave it to us. This is something that every believing Jew knows.

REJECTING A REFUGE FROM ANTI-SEMITISM

Had the Jewish aspiration for a homeland been based on the need to escape European anti-Semitism, as the Arabs claim, then one of the most extraordinary episodes in Zionist history would have ended very differently.

Had the Jewish aspiration for a homeland been based on the need to escape European anti-Semitism, as the Arabs claim, then Uganda would have been a fine option.

Theodor Herzl, who founded of the political movement of Zionism in 1897, was an assimilated Viennese Jew. Convinced that no amount of assimilation would assuage European anti-Semitism, he began to work fervently for a Jewish national homeland. Rebuffed by the Turkish Sultan who controlled Palestine, and by the German Kaiser, an ally of the Turks, Herzl turned to Great Britain. In March, 1903, the British government magnanimously offered Dr. Herzl the land of Uganda.

At first, Herzl rejected Uganda. But a short time later, on Easter, 1903, the Christians of Kishinev, Russia, perpetrated the first pogrom of the 20th century. The attackers threw children out of upper-story windows, gouged out their victims' eyes, and drove nails into their heads. For two days the Czar's police allowed the carnage to rage. On the third day, the government in St. Petersburg ordered the slaughter to cease.

The Jewish world was severely shaken. Herzl, convinced that the Kishinev pogrom was the harbinger of even worse anti-Semitism, decided to accept Uganda as the Jewish homeland and refuge from anti-Semitism. At the Sixth Zionist Congress in August, 1903, Herzl rose and addressed the delegates: "I have a great surprise for you. His Majesty, Sovereign of the British Empire, is sending you a gift -- a gift called Uganda."

Salomea Levite, a young delegate at the Congress, described what happened next:

When he returned to his seat, there was unbelievable tension in the room, but total silence. Not a single voice was heard. Then, suddenly, it was as if the entire hall had stirred to life. Some people began shouting, "We don't want it! We don't want it!"

... [Dr. Herzl] didn't understand what had happened. He didn't understand it at all. He just couldn't digest how it was that such an unfortunate nation, suffering pogroms and denied all rights and privileges, could be offered an entire country and say, "No!" The Russian Zionists began to explain: "We don't want just any country! We want to return to our ancient, ancestral homeland."

Herzl was especially in consternation that the delegates from Kishinev, the survivors of the slaughter, chose to forego the refuge of Uganda because they wanted no place other than the Land of Israel.

These delegates were not religious Jews, but the religious and historic yearning of the Jewish people to return to Zion burned in their souls. As Max Nurock, a British Jew who served as Lieutenant-Governor of Uganda during the 1940s, would later say in an interview about the Uganda option: "It wouldn't do. It wouldn't do. You know, it hadn't got the spark of Divinity in it. Do you understand what I mean?"

7 Ways You Can Help Israel

My Aish birthright Experience
Don’t Believe in Other Gods Versus God is One
Seeing Without Eyes
Why Shouldn’t We Eat Whatever We Want?
Comments
MOST POPULAR IN Israel
Our privacy policy
Aish.com Is Looking for Great Writers