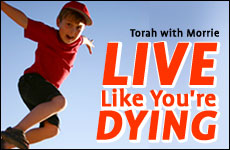 Someday we are all going to die. Even though we all know it, most of us spend our lives pretending as if we will live forever. Who wants to deal with their eventual demise?

Facing death is frightful not only because we have to give up everything we love in this world, but because we are forced to confront the fear of the unknown.

As Francis Bacon once said, "Men fear death as children fear to go into the dark."

Judaism has a different perspective on death. The Torah actually states that death is a good thing:

Why is death associated with something good? Death is part of life, but a good part of life?

When Morrie Schwartz was diagnosed with amyotrophic lateral sclerosis (ALS), Lou Gehrig's disease, a fatal and ruthless illness of the neurological system, he began to tackle his own imminent death in a realistic, powerful, and courageous way:

'Do I wither up and disappear, or do I make the most out of my time left?' . . . He told his friends that if they really wanted to help him, they would treat him not with sympathy but with visits, phone calls, a sharing of their problems, the way they had always shared their problems, because Morrie had been a wonderful listener. . . He was intent on proving that dying was not synonymous with useless. . .

'Am I going to withdraw from the world, like most people do, or am I going to live? I decided I'm going to live, or at least try to live, the way I want, with dignity, with courage, with humor, with composure.'.

'Dying is only one thing to be sad over, Mitch. Living unhappily is something else. So many people who come to visit me are unhappy.'

Because Morrie knew he only had a short amount of time left, he wanted to live life to its fullest. He wished to pack into his remaining months as much love and friendship as possible. He would not allow his dire situation to make him unhappy and bring him into depression. He was living urgently, intensely and purposefully because he understood that he would die very soon.

Like Morrie, we should all live urgently, intensely and purposefully because, when you think about it, we all have a "fatal disease" -- life itself. No one knows how long he or she will live. To get the most out of life we should all live as if we were dying, because the truth is, we are.

Ethics of the Fathers does not say where you will be going in the future, but where you are already going. From the time we are born, we begin a journey whose destination is our eventual death and entry into the afterlife. That's why we must make the most out of every single day of our lives.

As the Talmud states:

Rabbi Eliezer said: Repent one day before your death. His students asked him, 'Does a person know when his day of death will occur?' He answered them, 'Then he should repent today, perhaps he will die tomorrow! Thus, all his days will be full of repentance!

This is what King Solomon said in Kohelet (9:8): 'Your clothing should be white at all times.'… There is an allegory which illustrates this. A king invited his servants to a grand feast but did not inform them when the feast was to transpire. The smart ones dressed in their finest clothes and prepared themselves by waiting outside the palace's entrance. The foolish ones remained in their common clothes and continued to engage in their own pursuits, thinking they had plenty of time. Suddenly, the king asked for all to attend, and only the smart ones were asked to sit, eat, drink, and enjoy." (Paraphrased from Shabbat 153a)

Life is one long preparation for a big feast with the Master of the World. We could be called to attend this feast at any time; none of us know our day of death. If we are one of the smart ones, we will live each day in preparation, urgently, intensely and purposefully.

Death is good because it puts a limit on the number of days we have to accomplish our goals. If we were given an infinite amount of time in this world, most of us would never be driven to attain anything. We would always feel that we have so much more time to complete our tasks. Knowing that our days are numbered, we are motivated to strive for greatness.

This is the explanation for the time-honored Jewish custom of reciting the 'Modeh Ani'' prayer upon waking up every morning:

"I thank You, Living and Enduring King, for You have returned my soul to me, great is Your faithfulness!"

We declare that we do not take life for granted. We realize that sometimes people die in their sleep and, upon waking, we acknowledge God's kindness in permitting us to live another day.

Life is short. Let's make sure we live each day with urgency, purpose and meaning.