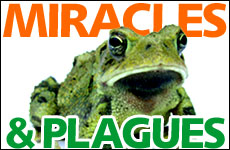 Come on! What do you mean "Miracles"?

We have to deal with this idea of miracles, because the modern, scientific mind says, "Come on, what do you mean miracles?"

If you would say to people that there is enough energy in a little bomb to blow up an entire city, they'd say you're crazy -- how could there possibly be so much energy in that little thing? The fact is, the energy holding bonding elements and atoms together is immense, and when you release that bonding, nuclear fission produces tremendous energy. This law of physics always existed. It just wasn't until the 20th century that we understood how to unlock that energy. That's law of nature.

But nature can be superceded by miracles. "Miracle" means there is a spiritual level where you can manipulate nature. The Kabbalah gives you instructions for how to do that. It's very "scientific" because they are also operating according to laws. Moses knew how to do this very well -- that's how he split the sea.

Through the Ten Plagues, the Egyptians and the Jews were forced to realize that all of nature has another level to it -- a spiritual level. Everyone came to understand that God runs everything and all of it can change. The plagues touched every aspect of the physical world, starting with the lowest forms and working higher.

The plague of blood affected "water." The next plague was frogs -- creatures who live in the water then come onto dry land. Then lice infested the dirt. Then came wild animals -- a higher form of species. Then pestilence hit the cattle. The next plague already affected human beings -- boils appeared on their skin. Hail is higher still -- coming from the sky. Locusts are animals of the sky. Then darkness affects the basis of life -- light and dark. Finally, the killing of the first born took the soul.

But there's one higher level still. Eventually the Egyptians chased the Jews and the Red Sea split. There you see that not only does God run everything, but nature itself responds to good and evil. God split the sea for the "soul" -- the Jewish people, but it swallowed up the "body" -- the Egyptians.

The Seashore and the Seder
It Takes A Lot Of Faith To Be An Atheist
How Instagram Brought Back This Nostalgic Soup
What Makes Eli Run?
Comments
MOST POPULAR IN Passover
Our privacy policy