World of Love #1 - Purpose of Creation 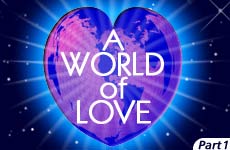 God's motivation for creating the world sheds light on our own life goals.

Why did God create the world?

As our sages teach us, there is absolutely nothing positive that we can say about God Himself. He exists -- and we can say no more. But we can speak of His relationship with His world.

Goodness and love are God's two most basic qualities.

One of the main things that we can say about God in this manner is that He is good. Not only do we say that God is good, but also that He defines good. Every act of God contains the most pure and infinite Good that can exist. His goodness and love are the two most basic of God's qualities as far as we can understand, and they work together to bring about His purpose. The Psalmist sings of this and says, "God is good to all, His love rests on all His deeds" (Psalms 145:9).

God has absolutely no need to create the world. God Himself is absolute perfection, and has no need for anything, even creation. When He created the world, He therefore performed the most perfect possible act of altruism and love. No matter how selfless a human act may be, there is always some benefit to the doer, even if it is nothing more than a degree of self-satisfaction.

But God, on the other hand, has no needs or wants, and therefore, there was nothing about Him that creation could satisfy. It was therefore the most perfect possible act of love. The Psalmist again speaks of this and says, "I have said: ‘The world is built of love'" (Psalms 89:1).

We say that God is good because He acts in love. Neither His good nor His love are in any way limited. There is an often-repeated chant that speaks of both God's goodness and His love. It goes, "Give thanks to God, His love is infinite" (Psalms 136:1).

God was under absolutely no compulsion to create the world. We therefore call His creation an act of pure and infinite love. The litany thus continues (Psalms 136:5-9):

The Baal Shem Tov explains this in a somewhat deeper manner. We know that God knows the future just as He knows the past. Therefore, even before creation, God knew of mankind. And just as He knew man, He loved man. It was this love of generations yet unborn that brought God to create the universe. God saw the good people of every generation, and His love for them served as a focus for creation. Our sages thus teach us that God perceived the deeds of the righteous before creating the world. He therefore told us through His prophet, "With an infinite world of love have I loved you, therefore, I have drawn you to Me with affection" (Jeremiah 31:3).

It was love of generations yet unborn that brought God to create the universe.

God Himself calls His creation an act of goodness. It is for this reason that at the end of creation the Torah says, "And God saw all that He had made, and behold, it was very good" (Genesis 1:35). What God is telling us in the Torah is that creation is an expression of His good.

The Talmud (Brachot 60a) tells us a story that expresses this most graphically:

Rabbi Akiva was once traveling. With him, he had a donkey, a rooster, and a torch. He came to a city and sought lodging, but they would not let him stay for the night. Rabbi Akiva did not complain. He merely remarked, "All that God does is for the good."

Having no other choice, he camped in a field. During the night, a lion came and killed his donkey. Later, a cat came and ate his rooster. Finally, a wind came and extinguished his torch. Again, he said, "All that God does is for the good."

In the morning, Rabbi Akiva walked back to the city where he had sought to spend the night. He found the city sacked and all its inhabitants killed. If he would have spent the night there, he would have been among the dead. If the Romans would have heard his donkey bray, or his rooster crow, or if they would have seen his torch, they would have found him and killed him. Realizing all this, he exclaimed, "Have I not said that all God does if for the good."

Everything in creation is part of God's plan. God's plan is the ultimate good. The wise Solomon thus teaches us, "God made everything for His purpose, even the wicked for the day of evil" (Proverbs 16:4). The Talmud (Yoma 38a) comments on this, saying, "Everything that God created in His world, He created for His glory."

Of course, there is a limit beyond which we cannot ask. We cannot ultimately understand God's motive in creation, any more than we can understand anything else about His being. Ultimately, He created for His own purpose, unknown to any being other than Himself. The final statement that we must make is that God created the world for His own reasons, or in the words of His prophet, "Everything that is called by My name, for My glory, I created, formed and made it" (Isaiah 43:7). When God speaks of His glory, He means that it was for Himself -- for His own reason, beyond all human comprehension. With relation to ourselves, we call God's motives "good." But in relation to God Himself, it is totally beyond our understanding.

But God had a plan for the world, and this plan was ultimate Good. The expression of this plan was the Torah, and as such, it served as the blueprint for all creation. Thus, God Himself calls the Torah good, as He told the wise Solomon, "I have given you a good thing, do not forsake My Torah" (Proverbs 4:2). Our sages explain that this means that the Torah is God's ultimate plan of good for the world, and say, "There is no good other than Torah."

Once God made His plan to do good, He then had to make a world to receive it.

It was this plan that ultimately led God to create the world. Good cannot be given unless there is someone to receive it. There is a Midrash that expresses this quite clearly, teaching us that God asked the Torah if He should create the universe. The Torah replied, "If the King has no camp, then over what is He a King?"

What this Midrash is teaching us is that once God had created the Torah, then it could tell Him to create a world. This means that once God had made His plan to do good, then He had to make a world to receive it. In a sense, we can say that God was drawn to create the world by His own plan. The plan itself could "tell" God, "There is no King without a kingdom," as the scripture itself echoes (Proverbs 14:8), "In a multitude of people is a King's glory."

In Part 2, we'll examine how God enables us to perceive Him..

World of Love #2 - Perceiving the Infinite

World of Love #4 - Glow of Accomplishment

World of Love #5 - Closeness to God

World of Love #7 - The Possibility of Evil
In the Shadow of David and Goliath
Where Do the Laws of Nature Come From?
Saadiah Gaon, Rashi and Maimonides: How Three Rabbis Revolutionized Judaism
Comments