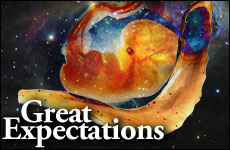 During the first days of the Jewish year everything matters.

Thoughts of consequence can sometimes arise from the most mundane experiences, even a headache.

Opening the medicine cabinet one day, I was struck by a sticker on a prescription container.

"Not for use by pregnant women," it read.

"And why not?" part of my aching head wondered.

Because, another part answered, a fetus is so much more sensitive to the effects of chemicals than a more developed person. Partly, of course, because of its very tininess, but more importantly because it is an explosively developing thing. While a single cell is growing to a many-billions-of-unbelievably-variegated-cells organism in a matter of mere months it is easily and greatly affected by even subtle stimuli.

This thought led, slowly but inexorably, to others, about the creation of the world and the beginning of a new Jewish year.

A slight diversion at the beginning can yield an enormous difference.

"The Butterfly Effect" is the whimsical name science writers give to the concept of "sensitive dependence on initial conditions," the idea that beginnings are unusually important. A diversion of a single degree of arc where the arrow leaves the bow – or an error of a single digit at the beginning of a long calculation – can yield a difference of miles, or millions, in the end. For all we know, the flapping of a butterfly's wings halfway around the world yesterday might have set into motion a hurricane in the Atlantic today.

The most striking butterfly effects take place during formative stages, when much is transpiring with particular rapidity. Thus the label on the medication. The gestation of a fetus, that single cell's incredible journey toward personhood, is strikingly responsive to so much of what its mother does, eats and drinks. The developing child is exquisitely sensitive to even the most otherwise innocent chemicals because beginnings are formative, hence crucial, times.

Leaving the realm of the microcosm, our world itself also had a gestation period, six days' worth. Interestingly, just as the initial developmental stage of a child takes place beyond our observation, so did that of the world itself. The event and processes of those days are entirely hidden from us, the Torah supplying only the most inscrutable generalities about what actually took place then. Thus, the Talmudic rabbis applied the verse "the honor of God is the concealment of the thing" (Proverbs, 25:2) to the days of creation. E.A. Milne, a celebrated British astronomer, wrote "In the divine act of creation, God is unobserved and unwitnessed."

Despite our inability, however, to truly know anything about the happenings of creation, to think of those days as a gestational time is enlightening.

Rosh Hashana is called "the birthday of the world." But the Hebrew word there translated as "birth" – harat – really means the process of conception/gestation. And so, annually, at the start of the Jewish year, it seems in some way we relive the gestational days of creation. But more: those days are formative ones, the development period for the year that is to follow. Beginning with the "conception-day" of Rosh Hashana itself, and continuing to Yom Kippur, the period of the early new Jewish year is to each year what the creation-week was to the world of our experience: a formative stage.

All of which may well lend some insight into a puzzling Jewish religious law.

We are instructed to conduct ourselves in a particularly exemplary manner at the start of a new Jewish year. We are cautioned to avoid anger on Rosh Hashana itself. And for the year's first ten days, we are encouraged to adopt a stricter measure of Jewish observance, and to generally conduct ourselves, especially interpersonally, in a more careful manner than during the rest of the year.

What is the point of pretending to be on a higher level of refinement?

It is a strange law. What is the point of pretending to a higher level of observance or refinement of personality when one may have no intention at all of maintaining those things beyond the year's first week?

Might it be, though, that things not greatly significant under normal circumstances suddenly take on pointed importance during that week, because those days have their analogue in the concept of gestation?

Might those days, in other words, be particularly sensitive to minor influences because they are the days from which the coming year will develop?

Observance and good conduct are always in season, but Jewish tradition teaches that they have particular power during Rosh Hashana and the "Ten Days of Repentance" – that we should regard these days with the very same vigilance and care an expectant mother has for the rapidly developing, exquisitely sensitive being within her.

Torah with Morrie #13: Giving Through Taking

Myth: Religious Jews have Sex through a Hole in a Sheet
The Softball Player
How This 6 Generation Bread Baker Brought Back Israel’s Ancient Grains
Olivia Newton John’s Grandfather was a Nobel-Prize Winning Jewish Physicist
Comments
MOST POPULAR IN Spirituality
Our privacy policy
Aish.com Is Looking for Great Writers