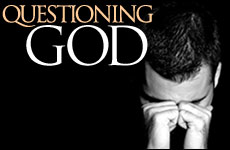 Last night we got the bad news. Our close family friend will be battling cancer again, for the third time in ten years. I sat alone on the sofa -- praying, meditating. Why, God? Why?

After a good hug and a good cry, what can I do to keep the thoughts at bay? Thoughts that tear away at the curtain of faith, that yell questions out into the darkness of a deadly disease.

Sometimes when you ask God a question, He gives you an answer. I got my answer a few hours later. A teacher of mine told an incredible, true story that spoke directly to my conflict.

A Talis in Auschwitz

Rabbi Meisels was a bastion of faith and strength in the torment of the Nazi concentration camps. When he was summoned for transport to Auschwitz, he took only one possession: his prayer shawl. This particular talis had been passed down to him and carried a great deal of sentimental and spiritual value. He held on to the talis as a symbol of God's protection during the war, and he resolved never to let the Nazis take it away.

When he and his family reached Auschwitz, they were stripped of their every earthly possession. The talis was torn away from him to become part of the Nazi treasure trove. Yet Rabbi Meisels would not give up his precious talis so easily.

As he sorted through the piles, he came across his special prayer shawl.

He asked to be given work in the warehouses, sorting out the confiscated goods. Sure enough, as he sorted through the piles, he came across his special prayer shawl. Overjoyed, he now needed to figure out how to smuggle it out from the warehouse. An item of such a large size would not be easy to conceal.

It took a lot of planning and daring, but finally, Rabbi Meisels managed to cut down the large prayer shawl and make it into a pair of tzitzis [fringes worn on a four-cornered garment] which he could wear underneath his inmate uniform. He wore his tzitzis faithfully every day, despite the threat of certain death were he to be discovered.

After the inmates showered, a Russian kapo who worked under the Nazis noticed that Rabbi Meisel's uniform seemed bulkier than usual. He pulled up the hapless rabbi's shirt and discovered the contraband -- the tzitzis! Enraged, he began beating and cursing the Jew, demanding to know what it was that the inmate was wearing.

Rabbi Meisels managed to stammer, "A Gutt-kleid -- a Godly garment."

This admission brought the kapo to an even greater fury. He dragged the Jew to his bunker and proceeded to pummel him relentlessly.

"You pig!" he screamed. "You have the audacity to tell me that you're wearing a Godly garment? Where is your God in this world? What has He done for you, leaving you at the mercy of this death and destruction? How dare you tell me there is a God!"

The kapo fell silent for a moment, and then he made the Jew this offer. "I am giving you one chance. If you can prove to me that God exists, despite this hell we are experiencing, then I will let you go. But if not, I will finish you off right here and now."

Rabbi Meisels was at a loss for words. How could he possibly respond?

He prayed silently for divine guidance, and then he said, "I will tell you a parable. Once there was a master surgeon who could perform miraculous surgeries that would cure people of the most difficult ailments. One day, a woman with a dreadful disease came to him, and he agreed to perform surgery on her. In the operating room with the surgeon was a shoemaker, who observed the surgeon's every move. The shoemaker watched as the surgeon made incisions into perfectly healthy-looking skin, inflicting -- to his mind -- terrible damage on the patient. It's absurd to cut into healthy tissue! he thought. I only cut into damaged leather when I need to repair it!

"'What a foolish, inept surgeon!' was the shoemaker's ultimate conclusion.

"In this world, we are like that foolish shoemaker," Rabbi Meisels concluded. "We haven't even the slightest inkling of the ways in which God runs the world. Sometimes we see Him cutting into 'healthy tissue,' so to speak, and we are aghast. But He is a Master, and He knows infinitely more than we could possibly know.

Seeking all the Answers

"My great-grandfather," Rabbi Meisels continued, "lived to an extremely old age. When he was asked how he merited such long life, he had a very simple answer. All his life, my great-grandfather told us, he never questioned God. Even when things seemed very difficult to understand, he made a point of never questioning God in his heart or mind.

"'Why don't you question God?' we once asked him. The reason he gave was very simple. He didn't want God to tell him, 'You want to know the answers? Come up to the heavens and everything will be clear to you!' He wasn't interested in leaving this world prematurely, just to find out a few answers, no matter how burning the questions were! It was enough for him to believe that God has the answers, and he was content to find out the hidden secrets after 120 years!'"

Rabbi Meisels turned to the kapo. "I think you are also hoping to get out of this war alive and make a new life for yourself without the Nazis on top of you. I suggest you take my great-grandfather's advice and hold back on questioning God. You don't want Him to summon you up early, just to give you the answers you seek."

We can't answer everything in this world, but there is a Master Surgeon and He knows what He is doing.

The story rankles many, but to me it's a source of a comfort. We can't answer everything in this world, but there is a Master Surgeon and He knows what He is doing. I don't understand, but He does.

Perhaps our preoccupation with asking "why" is an attempt at gaining control. If I could understand the "why," then maybe I can affect the "what." The fallacy is that we think we are the ones running the world, not God. The fact is I am powerless over my friend's cancer, just as I am not in control of virtually everything else in the world. I can ask questions about God and the way He runs this world from today till tomorrow, and I am still just as powerless -- and just as confused.

There is one true power that God has given me and all mankind -- the power of prayer. For every experience a person undergoes, God creates two possible scenarios. The first case is what will happen if prayer is not offered; the second case is what will happen if prayer does take place. This profound insight can be a great source of comfort to us as we navigate the uncertainties of life. Even though we are not in control, we can do our little part to arouse God's mercy through heartfelt prayer.

The story of Rabbi Meisels and his precious talis did not end with the clever answer he gave to the kapo. The second part of the story is even more remarkable, and if I hadn't heard it from a very reliable source, I might have even doubted its accuracy.

As the Allied forces advanced, the Nazis forced their Jewish prisoners on death marches and moved them around to different locations. Rabbi Meisels found himself being led to a cattle car which would transport him to another camp. As he was about to reach the train, a Nazi by the name of Willy suddenly grabbed him, searched him, and found his precious tzitzis. With great relish, the Nazi tore the tzitzis in half and threw them into a fire, destroying them forever.

Rabbi Meisels was utterly crushed. He had looked to the tzitzis as a reminder of God's protection, and now -- so close to being liberated -- they were taken from him and destroyed. Rabbi Meisel's son, who had also endured the concentration camps, tried to comfort his father but to no avail. The two were shoved onto a cattle car, packed tightly together with their fellow Jews, while their Nazi guards --Willy among them -- sprawled out on the opposite side of the car.

Overcome with exhaustion and sadness, Rabbi Meisels laid his head on his son's shoulder to sleep a little bit. Suddenly his son felt extremely ill and weak, and he was unable to bear the weight of his father's head.

"I'm sorry," he told his father, "but I can't have you place your head on my shoulder. It's just too painful for me."

At that moment, a huge explosion was heard right outside the cattle car and a piece of shrapnel flew through the wall of the train. It went right through the space between the heads of Rabbi Meisels and his son, and headed straight for Willy -- the guard who had destroyed the tzitzis-- cutting off both his hands.

Rabbi Meisels recounts that the Nazi guards themselves taunted Willy saying, "So you're going to destroy the Jew's tzitzis, Willy? Look what happened to you because of it!"

Sometimes God's ways are hidden; sometimes they are revealed. But they are always just and good. I don't want to live in the question any more. I want to live in the answer. The answer is trust and prayer. I can trust that God is loving, compassionate, and all-powerful, and that He can heal my friend -- indeed, bring any kind of salvation -- in the blink of an eye. I can pray, and remind myself that prayer has an inestimably powerful impact.

I am the shoemaker; He is the Master Surgeon.

Is the Messiah a Christian Concept?

The Miracle of Jewish History

The Light of the Life Force

What's the Difference between Happiness and Pleasure?
For Every Individual, A Torah Scroll
Allegiance To The Monarch
Meet the Real You: Yom Kippur
Comments
MOST POPULAR IN Spirituality
Our privacy policy
Aish.com Is Looking for Great Writers