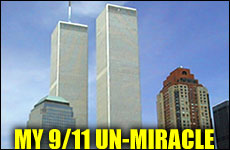 I didn't have to climb down 65 flights of stairs. Thank God, I had the greatest miracle of all: I got to work on time.

September 11, 2001 started out like any other day. I was going to work and running late. Traveling from New Jersey to the Upper East Side of Manhattan, I had a number of different commuting options. That day it was the bus to the PATH Train to the Subway. The 1993 terrorist attack on the WTC was never far from my mind as the PATH train uses its basement as its NY station stop. Anyone could board those trains with anything.

That day I was rushing as usual and couldn't let those thoughts slow me down. It was the first day of Kindergarten in the school where I worked, and I didn't want to be late. My train pulled into the WTC at about 8:42 that morning. As the doors opened, I joined with the throngs of other commuters heading to the huge escalators that bring you up to the ground level. Walking up, I always felt a bit of an excitement at that spot where you are greeted by a huge digital sign, "Welcome to New York. Have a Nice Day!" I felt a part of the hustle and bustle going on in the larger world, mixed in with every different kind of person going to fulfill their responsibilities for the day.

I breezed pass the shops and out the front doors of the building. Watch check: 8:45. Fifteen minutes to get uptown. Ran one block to the subway station. BOOM! I heard a loud noise behind me. Probably a truck backfiring. I didn't take the time to turn around. On the subway platform I checked my watch again, and then my cell phone -- more accurate -- 8:48. The train came and whisked me uptown. I got off at my stop and clamored into the school building at just about 9:00 am. I went straight to the classroom and started helping out. A few minutes later, parents started showing up to get their children. An attack at the World Trade Center? But I was just there. Nothing unusual was going on. Everything was fine.

Watching the towers collapse live on television, I let out an audible cry. The people, all those people...

I walked into the office where the staff had put the news on. I just couldn't understand the pictures I was seeing on TV. When did this happen? I tried to go back to the classroom, but I was so visibly shaken, my co-workers sent me back out. They still had no understanding of what had happened. I returned to the office. Watching the towers collapse live on television, I let out an audible cry. The people, all those people...

I couldn't get home that night, so I stayed at a friend's apartment in the city. The next morning when I prayed Shacharit, the morning service, I said Modeh Ani with an intensity that I had never had before. I was truly thankful to be alive.

As time passed and amazing stories of rescue came to surface, I would think about my own 9/11. I didn't have to climb down 65 flights of stairs. I wasn't narrowly missed by falling debris. Thank God I had no injury. I had no flashy story to tell. Thank God. I believe the Almighty protected me by performing the greatest miracle of all, getting me to work on time. He simply allowed me to miss the whole thing -- by about one minute.

Whenever the anniversary of the attacks comes around, I'm reminded to appreciate the un-miracles. The miracles of life itself, of nature, of science and technology. To appreciate when life continues uninterrupted. Since September 11 has a close proximity to Rosh Hashana, it is especially timely to go into the new year reminded that good and bad, only God runs this world. No matter what time it says on the clock, according to His plan, you are always right on time.

Amy Dubitsky has spent the last few years teaching Torah to both children and adults. Her husband, Associate Rabbi of Beth Joseph Congregation, together with their children continue to teach her something new each day.

The Robot Within
The 21st President of the United States: Failure or Inspiration?
Hiding Their Jewishness
The Jewish Pope: Following the Questions Home
Comments