Confronting the struggle between this world and the next.

As the 33 men trapped in a Chilean mine emerged after months underground, one of them proclaimed, "I was with God and I was with the devil. They fought and God won."

For months, the world watched and waited. The suspense was terrifying. And now at last there has thankfully been a happy ending. The miners are safe after enduring 68 days trapped 2,000 feet below the earth, a record for the longest time workers spent underground after a mining accident.

The rescue efforts were intensely followed by billions of people around the globe. And what made this story so universally fascinating is because all of us understood that it represented far more than the danger of death to 33 hapless victims of an underground cave-in.

Symbolically this was a morality tale about every man facing mortality. To be buried is the fate of all mankind; we come from the dust of the earth and to the earth we shall return. None of us can escape our eventual end. It is a somber truth. Like the miners, we will be interred.

Yet in this one instance death was defeated. While they still had breath within them they were aware of the struggle between this world and the other, between the here and the hereafter. And miraculously life won out. They didn't simply survive. As every one of them put it, they now feel convinced they have been reborn.

To return from the grave to new life is a profoundly moving concept that speaks to our souls. Carl Jung, along with Freud one of the leading pioneers in the field of psychology, popularized the concept of archetypes. He developed the idea that there is a collective unconscious with deep and primitive origins that cuts across continents and cultures. It perceives the world symbolically, in a language all of its own.

And it is concerned with the ultimate questions of life, of meaning, and of possible survival after death.

Are we born to die, with the grave as our final destination?

The events of our lives are transformed by our psyches into their symbolic content. They are viewed on the most fundamental level by how they answer the question of whether our existence extends beyond our fleeting residence on this earth. Are we merely born to die, with the grave as our final destination? Or can we dare hope that we will somehow rise up again to be greeted by all those loved ones from whom we had become separated?

The miracle of the miners as archetype offers a powerful illustration of life after death, of rebirth after the grave – and in a message subconsciously understood by all those who vicariously shared in the story, a vision of hope for the universal destiny of mortal mankind.

When the miners compared their rescue to birth they unwittingly connected with a remarkable parable that has its source in Jewish tradition. It is a story that fancifully allows us to express our belief in an afterlife, in spite of our inability to picture any kind of existence that markedly differs from what we know of as our own reality. 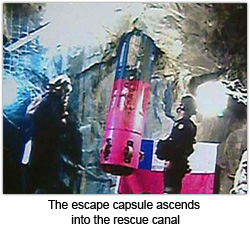 Take a fanciful leap of the imagination, the parable tells us, and picture twins before birth resting peacefully in the womb of their mother. Their mouths closed, fed with no effort on their part through the tube entering their navels, warmed by the fluids of the embryonic sac, they feel completely at peace and secure. They can't possibly conceive of a more comfortable or different way of life.

Allow them now, if you will, the gift of consciousness. Assume that they are aware of their surroundings, and they begin to consider their future. They recognize changes taking place around them, feel themselves descending, and start to debate what is going to happen to them.

It's impossible that all we can look forward to is oblivion.

The brothers each have strongly opposing views. One is by nature an optimist, the other a pessimist. The first is a believer, the second a skeptic. The believer is certain that another life awaits them after they are expelled from their present home. "I can't believe," he says with assurance, "that God would have put us here for nine months, cared for us, nurtured us, and allowed us to grow and develop without any purpose. There must be some greater plan that we still do not know. Our presence here could only have been preparation for a more glorious life to follow. It's impossible to think that all we can look forward to is total oblivion."

His brother, however, is much more of a realist. He despises wishful thinking and unsupportable expectations. For him, faith – as Marx would put it – is no more than “an opiate for the masses." "There you go," he says disdainfully to his twin, "confusing your hope with truth. The obvious fact is that everything that gives us life – the womb we live in, the cord from which we are fed, the security of our sac – is only here. Once we leave this place, we must die."

The believing brother again tries to make his case. He suggests that once out of the womb, they will be able to move even more freely. He talks about the possibility of other ways of getting food. He shares his dream of a kind of independence that goes beyond their present imagination. But unfortunately he cannot put it into words. Lacking any contact as yet with life as it's lived on earth, he is stymied when his brother puts down his views as impossible and asks him to defend his ideas with concrete examples.

So the twins come ever closer to their destined meeting with birth, separated by drastically different opinions about their fate. The believer is confident he will not only survive, but be even better off than he was before. The skeptic morosely awaits the collapse of his world in the coming down of the final curtain.

Suddenly, the water inside the womb bursts. There is a pushing and pounding. The twins realize that they are being forced from their home. The traumatic moment is here. The believer is the first one to exit the wall. His twin brother, still inside, listens attentively for any clue from the other side. With grieving heart, he takes note of a piercing cry coming from his brother.

"So I was right after all," he tells himself. "I just heard my poor brother’s scream of death." And at that very moment, a joyous mother and father are congratulating each other on the birth of their first child, who has just made his presence known by his cries of life.

What appears like death when seen from the other side is merely a higher form of life. Death and rebirth are synonymous. One leads to the other.

Elizabeth Kubler Ross put it beautifully when she said, "Death is breaking out of a cocoon and emerging as a butterfly." Or as the poet Tagore expressed it, "Death is putting out the lamp because the dawn has come.”

And this to my mind is why all of us feel such great affinity to the story of the miners being pulled almost literally from the grave to begin life anew.

Their story in a way is our story. Our souls recognize it as a tale that we will replay after the final curtain descends on our days, followed by our interment. Just like the miners, we will feel the tug of war “between God and the devil.” We too will come out to a great light so powerful that we will need time to adjust to its brilliance. Waiting for us will be all our loved ones who we feared we might never see again, embracing us with tears of joy and surrounding us with indescribable love.

And like the miners in Chile who know they have been reborn, we too will be overwhelmed by the return to our heavenly home, and exultantly proclaim "God won."

Discovering My Grandfather was a Nazi

I Became My Own Worst Nightmare
The Joy of Fasting
The 21st President of the United States: Failure or Inspiration?
Hiding Their Jewishness
Comments