Was There a Hanukkah Miracle? 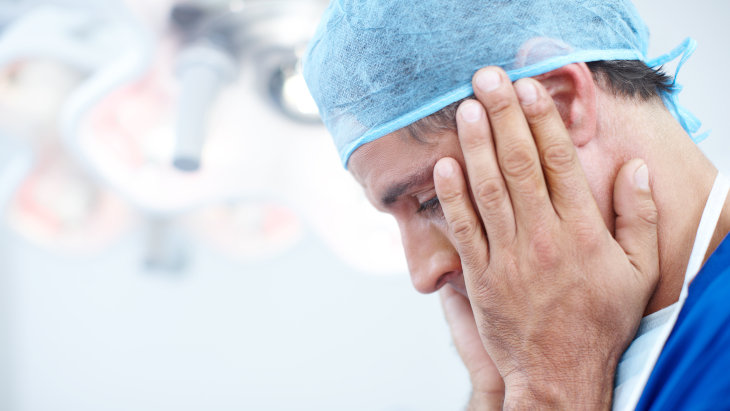 If ever there were evidence of supernatural intervention in human affairs, it would have to be in the realm of the medical.

“Oh yes, of course. Hanukkah is eight days long. Because of the miracle. One day’s worth of oil burned for eight days.”

This just trips off the tongue. But do we really believe it? Suppose a friend comes up and says that a flash of light appeared out of the sky, burst through his roof and lit his menorah on each of eight nights, all without leaving a trace of damage. We would roll our eyes, right? Either that, or hurry our friend off for some serious psychiatric treatment. Do we really believe in the Hanukkah miracle?

I believe that we credit ancient miracles which contradict the laws of nature in direct proportion to the extent that we perceive the supernatural in our own lives. This begs a question: What is the supernatural? Permit me to share a story shared in Dr. Harley Rotbart’s book, Miracles We Have Seen.

The 8th blessing in the Silent Amidah is a prayer for complete recovery from illness. The sages made this the eighth blessing because every day a Jewish boy is circumcised on his eighth day of life, thus creating a need for a prayer for healing every day somewhere in the world. If ever there were evidence of supernatural intervention in human affairs, it would have to be in the realm of the medical.

For a few years on Rosh Hashanah and Yom Kippur in the 1990s I sat next to Louis Richtol (1904-2005), a survivor of the pogroms of WW I. He used the machzor of his youth, the most unusual I have ever seen. It contained a prayer for the welfare of the government – the tsar’s government! The prayer specifically invoked blessing on the tsar and the tsarina. The irony – a prayer for a blatantly anti-Semitic regime included in a siddur by order of the regime.

Richtol’s grandson, Harley A. Rotbart, chose a very different path. He became a professor of pediatrics at the CU School of Medicine. In this position, he gathered 86 physicians around the US under a literary canopy: Miracles We Have Seen: America’s Leading Physicians Share Stories They Can’t Forget.

Men and women of science recorded medical miracles: outcomes they were professionally involved in but for which they had no professional explanation. In fact, many of the outcomes contradicted the expected medical course.

This is not a book of theology or exaggeration. It is a book of medical witness to supernatural intervention, akin to the eighth blessing of the Shemoneh Esrei. These 86 physicians include one whom I also sat next to, albeit in a shul founded years later, Dr. Matthew A. Metz.

When he was a second-year surgery resident “near the bottom of the totem pole,” as he put it, he was invited to watch the removal of a mass from a 60-year-old woman. He would consider himself fortunate if he were asked to hold the “retractor” tool or be allowed to help close the surgical skin wound when the important work inside the abdomen was finished.

It was a fairly routine procedure, but once it began – as Dr. Metz recounted – everything went quickly wrong. As the lead surgeon, an outstanding one, began to remove the mass, the bleeding began. The tumor had grown into the femoral vein, which tore. Uncontrolled bleeding filled the abdomen and its source could not be found. No tool or hand could find it. What seemed like a routine procedure now seemed likely to end in tragedy.

In what Metz later called a burst of adrenaline and irrational panic, he heard himself saying, “Can I try? Can I try?” What was I thinking? Who was I to even imagine I could do something the entire senior team in the room was unable to do?

But everyone was desperate and the outcome seemed inevitable. So the chief surgeon looked at Metz with a smirk, “Sure, Metz, here you go,” and handed him a vascular needle driver, the special forceps to stitch up a hole in a blood vessel – which no senior surgeon could see amidst the sea of blood, nor find.

To Metz, what happened next has remained a blur.

I have no idea what happened in that woman’s abdomen that morning, but I do know this: It wasn’t me guiding my hand to that blood vessel.

“I grabbed the needle drive and the attached needle and suture and plunged my hand blindly into the sea of blood in the abdominal cavity. Somehow, the needle and suture ended up precisely where the hole in the vein was, and I was quickly able to draw the two sides together.”

To the audible awe and amazement of everyone in the room, the bleeding stopped.

“At that moment, the adrenaline receded from my body almost instantly, and my knees went weak.” The surgery succeeded and the patient went on to a full recovery.

“I would tell my colleagues afterward that I didn’t deserve their congratulations. I have no idea what happened in that woman’s abdomen that morning, but I do know this: It wasn’t me guiding my hand to that blood vessel.”

What is the supernatural?

What is the supernatural? Based on the prayer of thanks, Rabbi A. G. Yachnes cites an oft-noted distinction between “wonders” (nifla’ot), which follow the laws of nature, and “miracles” (nissim), the direct Divine intervention in nature. Eight instances of direct Divine intervention are enumerated in the Talmud, beginning with the splitting of the Reed Sea (Berachot 54a, b). Likewise, eight days of Hanukkah represent the miracle of one day’s worth of pure oil lasting eight days (Shabbat 21b).

Jeremy Kagan in The Choice To Be draws another distinction: between Providence before the destruction of the Second Temple, which directly guided human affairs by, for example, healing illness without the aid of medical science; and between Providence after the destruction, which guides human affairs via causality in nature, e.g., healing via medical science.

In my experience, the distinction between miracles and wonders, or between healing with and without medical science, is not so hard-and-fast.

Even in the world of scientific causality, Dr. Metz’s sea of blood shows that laws of nature are not wholly controlling. Countless other doctors have testified to patient recoveries that they cannot explain. Both supernatural intervention and science are always at play. It is a mix.

This fits our knowledge of the supernatural itself. Moses could not see the “face” of God, but was allowed to see the “back” of God (Exodus 33:18-23). In other words, the laws of nature present both the knowable and the unknowable. When the supernatural invades our world, be it in medical healing or in other human affairs, we are able to perceive and know God’s imprint.

When the supernatural invades our world, be it in medical healing or in other human affairs, we are able to perceive and know God’s imprint.

The supernatural emerges in the world of the everyday. For example, we sometimes witness a superhuman effort, an act that goes beyond what can reasonably be expected of a human being. Such an act may be a physical response to danger seemingly beyond a person’s powers, or may be self-control in the face of intense provocation. Such acts, in going beyond nature, are supernatural, yet they are also natural.

The boundary between the two not is clear-cut.

This article originally appeared in the Intermountian Jewish News, based in Denver, Colorado.

Days of Thanksgiving
The 21st President of the United States: Failure or Inspiration?
Hiding Their Jewishness
The Jewish Pope: Following the Questions Home
Comments