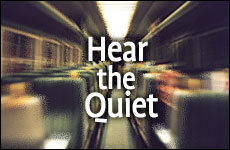 In the era of Blackberries and Bluetooths, where can you find a vestige of absolute peace and quiet?

The Northeast Corridor. I like the sound of that.

Boston, New York City, Newark, Philadelphia, Wilmington, Baltimore and Washington. They are all main stops on Amtrak's trek through The Northeast Corridor. It just sounds so official and consequential.

I travel a lot and I enjoy it, especially when my itinerary calls for The Northeast Corridor, because I am able to go by train. Trains are loads more fun than planes. There are big seats but no seat belts, big luggage shelves but no security checkpoints or weight restrictions, big restrooms and no long and boring safety speeches…in several languages. What a delight!

And among the many wonderful benefits of train travel, is the freedom I have to use my cell phone. I can yap away for hours (or…er…until my battery runs out), which is quite an advantage, except for the MINOR DETAIL that so can everyone else in my car. So, unless you just happen to mind hearing 30-40 intimate conversations of total strangers that range from how much make-up Cindy wore to the wedding last night to every sordid detail of last week's episode of The Sopranos, cell phone use on trains is simply marvelous.

And should you be among those who, for some strange reason, actually enjoy the sounds of silence, there is something called, The Quiet Car. The last car of each train is designated for those mindless travelers who foolishly choose to sleep, read, look out the window, or just contemplate, rather than communicate with the office, the bank, or Aunt Francine. Brainless simpletons -- wasting away hours of productive time, just for a little peace and quiet. WHERE WERE THEY RAISED?

Must one don scuba gear to get a few minutes of undisturbed quiet?

Fact is, that in today's era of Blackberries and Bluetooths (or is it Blueberries and Blacktooths?), the entire notion of peace and quiet is now basically extinct. Gone are the days when we could just pick up and "get away from it all." With the possible exception of Amish country, there are no more deserted islands, retreats of solitude and introspection, or phoneless beaches. They have been summarily replaced by satellites, instant messaging, and Wi-Fi zones. "Where were you, Sheldon?" has been exchanged for, "You're breaking up, Shelly!"

Now, the more exacting and picayune critics among us are surely reading this and thinking, "Wait a minute. It's not like there are no places left for us to hide. There are certain places that cell phones still don't work. There is the trusty elevator…or an old, long, deep tunnel! Or how about submerging oneself 50 – 60 feet underwater?

Okay, I guess you got me there. But you and I have both been in select elevators and tunnels where cell phones DID indeed work. So, must one don scuba gear to get a few minutes of undisturbed quiet? Is that the last oasis of repose left on this planet?

Of course, by now most of you do realize that I have omitted the most obvious of all havens of tranquility -- the airplane. Once they shut those doors, we can still look forward to hours of true, total and blessed unreachability(sic). Ahh…recline the seat, hear the comforting roar of the engines, and snuggle up with a comfy book or magazine, and never be interrupted by some cutesy William Tell Overture ring tone, or series of pestering vibrations.

Well, guess what? On May 10, the FCC auctioned off radio spectrum that will allow telecommunications companies to operate wireless Internet and cell phone services at 35,000 feet in the sky. Airwaves meet airplanes. This new technology breaks down what may be the final wall of seclusion and serenity available to us. The last opportunity to sit in a veritable cone of silence will soon be history. Air France has already ordered a plane with capability for cell phone use. Jet Blue announced its intention to do the same. Others will surely follow suit.

So basically, it's over. Big Brother has truly arrived and he is us. Pretty soon anyone can reach anybody, anytime. And if we choose to play the Caller I.D., I'll just ignore your call and refuse to answer game, we better have a good excuse ready. "I was out of range," will no longer wash.

For some, this news is no calamity. You could care less about oases of quietude. You eschew The Quiet Car and consider it primitive, inefficient, and most of all, unprofitable. You actually embrace the thought of NEVER being out of someone's reach. But for others (myself included), they bask in the temporary shelter of stillness and calm. They revel in the serene sanctuary of peace. They celebrate the joys of just being with oneself.

But there is one remaining hope, one final parcel of absolute and unconditional silence. It is an island of supreme and astonishing tranquility. We call it Shabbos.

It begins every Friday night with the lighting of candles and ends 25 hours later in the same way. And in between, sans all telephone use, we have the opportunity to achieve great levels of harmony, from within ourselves and within our families.

The Sages record a conversation (not on the phone, I presume) between God and Moses. In it, God tells Moses about an exquisite gift that He holds in his hidden cache of treasures.

"Its name is Shabbos," says God, "and I wish to give it to Israel."

Does that mean that Verizon and Cingular have no satellites or towers in the World to Come?

It is also called a hint of the World to Come; a foretaste of what real bliss is like. Does that mean that Verizon and Cingular have no satellites or towers there? I'll let you know when I get there.

But meanwhile, here on Earth, for those of us who still cherish our chances to wade in the still waters of serenity, we have Shabbos to count on. We sing, we pray, we shmooze, we eat (boy, do we eat), all without commercial or electronic interruption. And when the hiatus is over, we realize that we have re-charged our spiritual batteries and are better equipped to face the challenges of the week ahead.

In ceasing all creative work, we have emulated our Creator, when He fashioned the World and all its potential, but chose to "rest" on day seven. By shutting out the mundane forces that dominate our routine, we, in effect, "rollover" our souls and emerge stronger, holier, and more ready to grow.

So, if you've got a "hang-up" about never missing out on the action, I recommend an occasional dose of Shabbos… or at least Friday Night. It may be the last place on Earth you can find genuine peace. And it all starts with the Off switch.

Now that's what I call a really good connection!