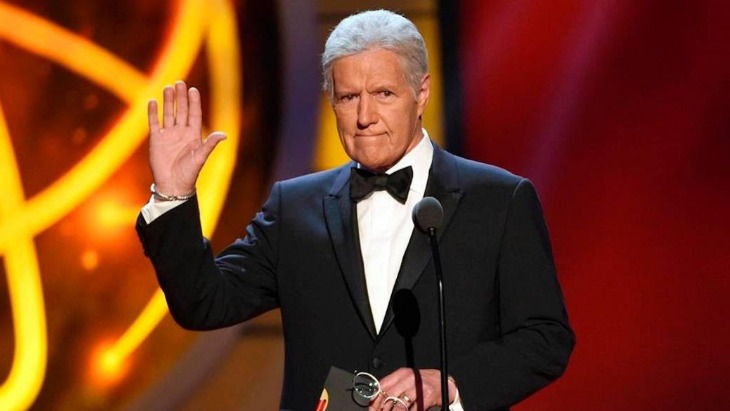 Reflections on the game show host from three Jewish contestants.

With the death of Alex Trebek, host of the game show Jeopardy, America has lost a quiet voice of dignity. In his 37 years with Jeopardy, Alex modeled some key Jewish teachings: courtesy, the ability to listen respectfully, and a firm refusal to ever embarrass others. Whether the guests on his show were winning or losing, Alex always treated them as peers worthy of esteem.

Decency was a core goal of Jeopardy from the beginning. The show was born out of a desire to restore some decency to television game shows. In the 1950s, cheating scandals rocked several popular game shows when it was revealed that producers on some of the most popular shows had leaked answers to select contestants beforehand.

In 1963, talk show host and media mogul Merv Griffin was talking to his wife about how he missed the old quiz shows. Given the scandals, he thought viewers would wonder if the answers had been leaked ahead of time. Merv’s wife Julann had a novel suggestion: why not make a show where the guests were given an answer, and then asked to make up the question?

Merv created a show called What’s the Question, then changed its name to Jeopardy in 1964. The first host was Art Fleming, who set the tone of decorum and inclusivity that helped make Jeopardy such a hit. Breaking with social norms of the time, Mr. Fleming used to take the unusual step of wishing viewers not only Merry Christmas each December, but also addressed the show’s Jewish fans. “I’d like to wish all people of the Jewish faith a most happy and joyous Hanukkah,” he used to say, in a groundbreaking gesture of good will.

Alex Trebek began hosting the show in 1984. Born in Sudbury, Ontario in Canada, in 1940, Alex grew up attending Catholic school and entered broadcasting as a way to earn money to help pay for his philosophy studies at college. He moved to the United States in 1973 and eventually became an American citizen.

“You have to set your ego aside,” Alex said of his role as a game show host. “If you want to be a good host, you have to figure out a way to get the contestants to – as in the old television commercials about the military – ‘be all you can be.’ Because if they do well, the show does well. And if the show does well, by association, I do well.”

Under Alex Trebek’s guidance, Jeopardy became an integral part of American life. Over 37 years, he hosted over 8,000 shows. Jeopardy contestants were diverse, and the show made an effort to ensure that contestants from every background felt welcomed.

“Alex was very kind,” recalls Marianne Novak, a religiously observant Jewish educator from Chicago who competed on Jeopardy in October 2016. Alex “would talk to you to make sure you’re comfortable.” During one break in the filming when she and Alex spoke for a few minutes, he asked what she spent her time doing: when Marianne described her rigorous schedule of learning Torah, Alex was enthusiastic and encouraging.

That kindness extended to the entire Jeopardy crew, Marianne observed. She’d auditioned for the show a few years previously, and was surprised to see that most of the same staff members were still working for Alex years later. “That’s very rare in television,” she notes.

Before she appeared on the show, Marianne worried about the scarf she habitually wears, covering her hair. She considered wearing a wig, as some Orthodox Jewish women do, on the show, but decided to be herself and go ahead with her usual hair covering. To her surprise, the Jeopardy crew was encouraging. They’d had many religious Jewish contestants who covered their hair before; Marianne’s wore her wide headband-like scarf on the show with pride.

When Chicago-area doctor David Sales appeared on Jeopardy in 2001, he found Alex to be “a real mensch,” using the Yiddish word for an honorable person. “He was very approachable, very smart.”

Contestants were asked to jot down a few interesting facts about themselves so that Alex would be able to better ask them questions about themselves. One of David’s facts he gave Alex was that he’d once gone on a medical mission to the Soviet Union, flying to Russia and Uzbekistan just around the time the USSR broke up.

It had been a decade since David’s trip, so he told Alex about a top-secret mission he carried out during the trip, unbeknownst to the other doctors on the mission. At the time, Soviet Jews were living with few amenities; Jewish life was strictly regulated and many Soviet Jews lived in abject poverty. “There were still refuseniks," David recalled, Jews who’d applied for permission to leave the Soviet Union and move to Israel and were refused, and also denied jobs, apartments and opportunities as a result.

Before his trip, David got in touch with a Chicago-area Jewish charity that aided Soviet Jews and asked how he could help. Would he be able to smuggle vital medicines to Jewish communities there? David didn’t hesitate: he agreed to bring medicines with him. When the time came to fly out for the mission, he left a few days early, carrying two suitcases: one for his clothes and one stuffed full of medicines – primarily antibiotics. The Jewish charity gave him top secret instructions to meet one representative from the Jewish community on a street corner in Moscow, where he handed over half the medicines. Another secret Jewish emissary met him in Samarkand in Uzbekistan. “I thought the story about the medicines would be the most interesting” thing to talk about with Alex on air, David recalls.

His wife wasn’t so sure. While David was getting ready to go on the air, his wife phoned the studio and asked to speak with him. David was in the “green room” where contestants got ready, and couldn’t be reached. Was it possible to send a message to Alex Trebek instead? Even though it had been a decade since David’s life-saving heroism, she worried that telling his story might be dangerous to Russian Jews. When the time came for Alex Trebek to chat with David on air, he asked him about his medical mission to the former Soviet Union – but left out any reference to him bringing medicines with him.

Keeping Shabbat While Competing on Jeopardy

“When I got the call to come and be on Jeopardy for the teachers' tournament” in 2020, New York City Jewish day school teacher Meggie Kwait was told to fly out to California on a Saturday along with the other contestants. An observant Jew, Meggie doesn’t fly on Shabbat; she asked the Jeopardy producer if she could fly out on Sunday instead. 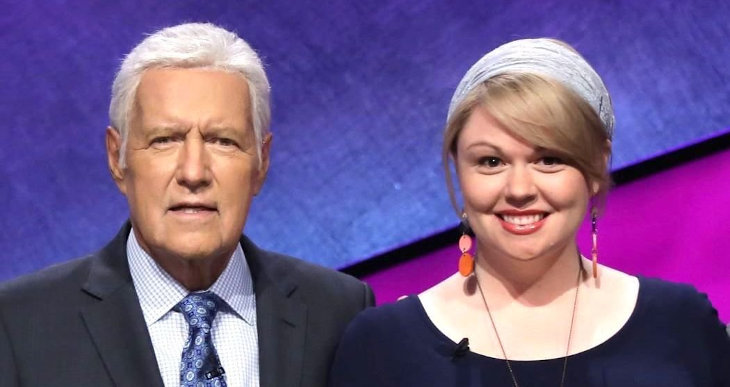 Of course, was the answer. Meggie then asked if some of her relatives would be able to sit in the studio audience and watch the show. “Of course, we have to have the whole mishpacha!” the producer said, using the Hebrew word for family.

When Alex Trebek announced that he was suffering from Stage 4 pancreatic cancer, some of his former contestants created an online service to pray for his health. Organized by Geoffrey Mitelman of New York, the March 14, 2019 service brought together dozens of people who’d competed on the show. Marianne Novak participated in the event, reading a modified Jewish prayer for healing. “It was just beautiful,” she said of the event. 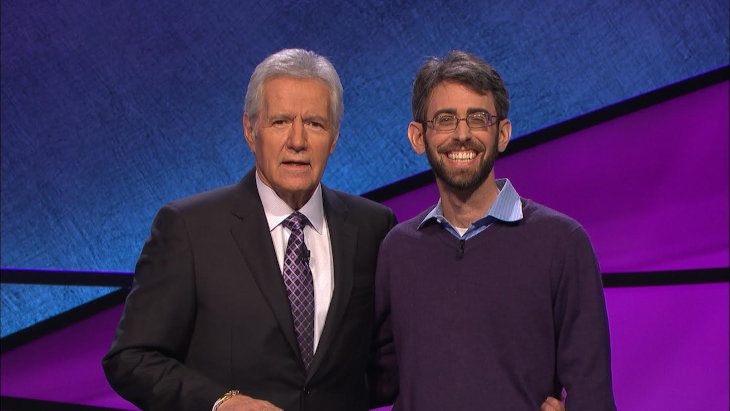 “If (Alex) hadn’t been such a good guy, if he wasn’t such a good person, this wouldn’t have happened,” Marianne noted. “He was such a calm, cool guy who didn’t take himself seriously. He was someone people felt a connection to even though they only met him for ten minutes” during the course of the program. “If you’re that kind of person, those things sort of exude, and people connect with them.” It’s a sentiment many people who competed on the show share, she explains.

Jeopardy is currently still on air, and will continue showing previously taped episodes until the final week of December. David Sales still avidly watches the show and was moved by a recent episode aired just days before Alex Trebek’s death. A contestant from California appeared on the show, and mentioned that he’d attended Jewish day school. “His chit chat item,” David chuckled, “was that when he was in day school he used to sing (the Jewish prayer) Adon Olam to the Jeopardy melody.”

Jeopardy occupies a unique place in American culture. It’s not merely a game show: it’s also a bastion of decency and decorum, a place where contestants relate to one another with respect and where everyone relates to each other with professionalism and good sportsmanship. Alex Trebek helped foster this positive attitude. He will be sorely missed.

The Sanctity of Life: A Jewish Perspective

I'm Right, and You're an Evil Monster
It Takes A Lot Of Faith To Be An Atheist
How Instagram Brought Back This Nostalgic Soup
What Makes Eli Run?
Comments
MOST POPULAR IN Current Issues
Our privacy policy