Katie Couric and The Other Racism 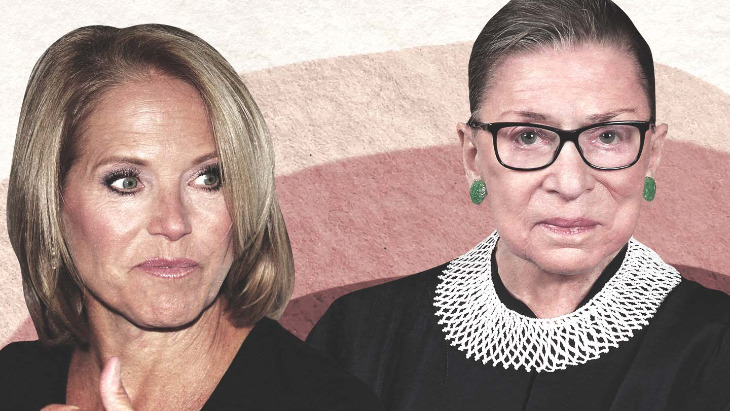 Ageism, the denigration and mistreatment of the elderly, is becoming recognized as a problem as serious as racism.

Katie Couric just spoiled the joy of my birthday celebration.

I know I’m not a youngster anymore. The latest big number I reached last week would probably be 20 miles over the speed limit in almost every state of the union. But I should be happy that God has blessed me with old age, the time of life used as a compliment in the Bible for “the elders of Israel” whose longevity ranks them as role models.

As Robert Browning wrote, “Grow old along with me, the best is yet to be, the last of life for which the first was made.”.

But that’s not how Katie Couric saw it in her new memoir Going There. She writes that in 2016 she conducted a video interview with Ruth Bader Ginsburg in which the liberal Supreme Court Justice called racial justice protests in the NFL “dumb and disrespectful.” However, Katie now admits that’s not exactly what the Supreme Court Justice really said. Ginsburg uttered something much harsher, something that wasn’t really politically correct, and Katie “wanted to protect the justice, who was then 83.”

Ruth Bader Ginsburg, a powerhouse of intellect with her countless achievements on the court was, by dint of her age, disqualified from being taken seriously.

Becket Adams, in the Washington Examiner, explained that Couric was moved to shield Ginsburg because the justice was “elderly and probably didn’t fully understand the question.” RBG didn’t understand a simple question in her 80s because, well, this powerhouse of intellect with her countless achievements on the court was, by dint of her age, disqualified from being taken seriously.

Sociologists have coined a new name for the phenomenon of the mistreatment of the elderly: "Ageism." It is a far broader and more contemporary concept than gerontophobia, the classic fear of old age. "Gerontophobia," as Erdman Palmore, Professor Emeritus of Medical Sociology at Duke University, points out, refers to "an unreasonable fear and/or irrational hatred of older people," whereas ageism has reference to a "deep and profound prejudice against the elderly which is found to some degree in all of us. "

"Ageism" is becoming recognized as a problem as serious as racism with one major difference: While we will never change color, all of us will hopefully grow old and become a part of the aged.

How ironic that the Torah itself promises length of days as reward for observing the commandment to honor your parents: "Honor your father and your mother, so that thy days may be long upon the land which the Lord your God has given you" (Exodus, 20:12).

The reward for a long life depends on honoring your parents not only for its fulfillment but its very definition. A society which honors its aged will, measure for measure, enjoy the blessing of longevity. Conversely, a culture which practices "ageism" finds that it in turn becomes the victim of its own ideology, suffering the curse of an undesirable life extension.

The Hebrew word for old, zaken, is according to the Talmud an acronym for the words ze she'kana chachmah - he who has acquired wisdom. To disregard our most important living natural resource is to deprive ourselves of innumerable benefits. We do not learn from those most fit to teach us the nature of the entire life experience. We miss a sense of ancestry, history and roots, and so lose a valuable understanding of ourselves. We fear the natural process within ourselves of growing old because it is unfamiliar and forbidding territory. We are strangers to the accumulated wisdom of personal experience because we chose to make strangers of those who could enlighten us.

How much better to reflect upon the wisdom of Ethics of the Fathers:

Segregation deprives the young and harms the old. Senility, it now appears, is often an expression of what one assumes is an expected norm of behavior. Robert Butler describes surviving in America:

The elderly's part in eliciting the kind of response which they receive from the young and from society at large is often a subtle but powerful factor in the public's general disparaging view of them. They collaborate with their ostracizers. Some individuals act senile: others may deny their true feelings in an attempt to "age graciously" and obtain the approval which is otherwise denied them.

We have created self-fulfilling prophesies by telling the old what we expect of them – or, better put, why we expect nothing of them. It should not come as a surprise that they live up to our expectations.

Katie, RBG, me, or anyone with white hair and wrinkles still have a thing or two to teach you.

When the Bible summarizes the definitive trait of a barbaric culture, it describes "A nation of fierce countenance, that shall not regard the person of the old" (Deuteronomy 28:46). It is by this standard, too, that we must engage in self-judgment – and unfortunately, we find ourselves wanting.

So Katie, in the future please don’t misquote Ruth Bader Ginsburg, me, or anyone whose white hair, wrinkled countenance, and stooped stance belie the accumulated wisdom of many decades. Trust me, we may still have something to teach you.

PewDiePie and the Anti-Semitic Internet

Embracing Insecurity: COVID-19 and Sukkot
Why My Iranian Mother Didn’t Want Me to Become a Religious Fanatic
The Jewish History of Prague
Why the Sexual Revolution was Bad for Women
Comments
MOST POPULAR IN Current Issues
Our privacy policy
Aish.com Is Looking for Great Writers