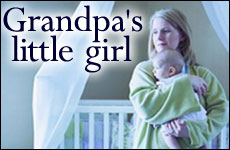 A dying father's words and blessings from the mikvah.

We sat in the hard plastic chairs by his hospital bed, smiling weakly at him. We were waiting for results of a test that would confirm our dreaded fear -- that Dad had cancer. Mom and I sat quietly, hoping our presence would comfort him. Then, Dad spoke.

"Judy, I was thinking how nice it would be if you had a little girl."

I was stunned. I had given birth to three boys in the past four years, and Dad had made no secret of his fear about just how far this unbridled fertility might go. Ever since my brother had died in a car accident many years before, Dad had developed some understandable, serious problems with God. I don't think he ever understood our religious enthusiasm for having a large family.

"And here are the names I like best," Dad continued, deepening my amazement. "Shoshana…" Mom and I agreed with him that Shoshana was a beautiful name.

"Naomi. . ." he continued, and again we nodded our approval.

"Muriel!" Mom and I laughed together at the amusingly dated choice.

It was such a funny moment at such a sorrowful time, but Dad's unprecedented discussion of a hoped-for granddaughter jarred me. I wondered: was it possible that God was somehow compensating for Dad's weakening physical condition by providing him with prophetic insights into my future?

Over the next eight months, my father slowly lost his battle with cancer, although he fought it with dignity and grace.

Over the next eight months, my father slowly lost his battle with cancer, although he fought it with dignity and grace. I found in my father a kind of strength that I had not seen before, and my respect for him only grew. Although he no longer spoke as he did that one day about my having another baby, I kept his words close to my heart, and I thought about them often.

Several weeks before Dad passed away, I had a discussion with a friend, a rabbi's wife, about the mitzvah of going to the mikvah. According to Jewish law, husbands and wives refrain from all physical intimacy from the beginning of the woman's period until she immerses in the mikvah several days after her menses cease. It is a critical foundation of Jewish married life, one designed to not only to enhance the physical relationship between husband and wife, but also the spiritual foundation of the home. Although I had used the mikvah regularly since my husband and I had married six years earlier, I had never made the extra effort to walk to the mikvah on the infrequent occasions that my mikvah night fell on Shabbat or a holiday. At the time, we lived several miles from the nearest mikvah, so for reasons of safety and convenience, we held off to the next night when I could conveniently drive. Yet we knew that somehow we were compromising the spiritual blessings inherent in the mitzvah by allowing a "convenience" factor to determine our practice of it. As I suspected, the rabbi's wife agreed.

Our newfound commitment to the mitzvah was immediately put to the test. My next true mikvah night indeed fell on a Friday night, so we hired a sitter, donned comfortable tennis shoes for the four-mile walk, and set out together to the mikvah.

Her words also merged with my father's prophecy, for a daughter was conceived after that visit to the mikvah. When I learned that I was expecting, I sensed that this was the little girl my father had spoken of.

Exactly 48 hours after I learned that I was pregnant, my father passed away in his sleep.

Powerful emotions swept over me: grief, loss and the surreal feeling that always accompanies the death of a close loved one. At the same time, the promise of new life within me sustained me, a harmony linking life and death. I became convinced that my father somehow had known that a daughter lay in store for me.

On February 16, 1994, Dad's wishes came true. Our fourth child, and first daughter, was born. We named her Yael, taking the Hebrew letter "yud" from my father's Hebrew name, Yaakov. And Yael, in addition to being a biblical heroine, also means "to ascend." Just as her grandfather had ascended to the World of Truth, we pray that she will ascend in this life to the highest levels of personal and spiritual achievement. We chose her middle name, Bracha, simply because that's what she has always been and always will be to us: a blessing.