The Siege of Leningrad: The Harrowing Story of One Girl's Survival 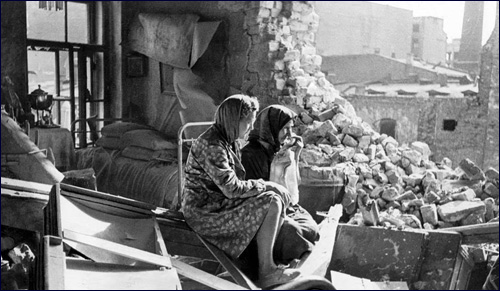 And her closely-guarded Jewish secret.

In 1937, Yevgeniya Buyanova was born into a Jewish family in Minsk, Belarus. Eighty years later, she is one of the few remaining survivors of the Siege of Leningrad. 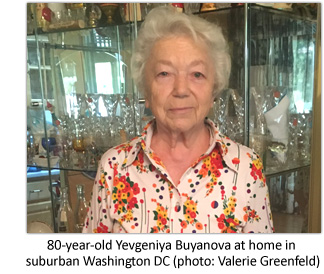 On June 22, 1941, under the codename Operation Barbarossa, the Nazis invaded the Soviet Union without warning. With the aim of conquering territory for natural resources and slave labor, this was the largest German military operation of World War Two.

Rather than spend troops and artillery to occupy the city, Hitler's infamous Directive No. 1601 ordered to "starve into submission" the people of Leningrad, saying that “we have no interest in saving lives of the civilian population.”

Yevgeniya spoke from her home in metro Washington, DC, summoning with detailed clarity the events of her youth in Leningrad (now St. Petersburg). Speaking mostly in Russian, she recalled the sirens signaling an imminent bombing; the explosions shaking her metal bed, causing it to move across the floor; and the harsh, freezing winters when the temperature reached minus-30 degrees Fahrenheit. 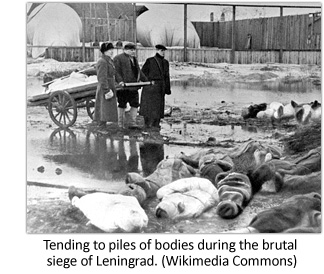 Indelible memories of the siege are carved into her soul. With pangs of hunger, fear of darkness, and pain of exposure – amidst hundreds of thousands of dead – 5-year-old Yevgeniya never knew life to be different. The food ration was 4 ounces of bread per day, per person – consisting primarily of “replacement” ingredients such as glue and sawdust. Neighbors stood in line for hours for a sliver of this “bread.”

By November 1941, rampant starvation and desperation had swept the city. Distraught parents desperately tried to feed their children – eating wallpaper, leather, plaster, even pets. A full-sized mink coat would be traded for a piece of bread; money was worthless. Society was coming undone, with people on the verge of insanity.

Due to the frozen ground, the local Piskaryovskoe Memorial Cemetery was unable to bury the many thousands of dead. As the Nazis continued shelling and bombing, craters formed in the ground which were then improvised as mass graves. To prevent the spread of disease, anonymous bodies collected off the street were placed inside these holes, without markers or prayers.

Yevgeniya remembers going to the market with her mother to trade their possessions for food. As desperation and panic swept the streets, she heard whispered conversations about cannibalism. More common was the act of murder as a way to obtain food ration cards.

Most dangerous of all was the wave of children being kidnapped and eaten. One day at the market, Yevgeniya’s older sister Maya noticed that Yevgeniya was distracted, looking at an airplane in the sky. A woman approached Yevgeniya and offered candy, then took her hand and began to walk away. “Maya began screaming frantically and I was saved,” Yevgeniya recalls.

Another heartbreaking memory was witnessing a man walking along, then dropping dead in the frozen street. "My mother told me not to be afraid of dead people,” she says, recalling chilled-to-the-bone death and destruction.

Hitler’s ruthless regime demanded total submission, but the rugged, resilient and tenacious citizens of Leningrad fought back with everything they had. Today the imperial capital of Peter the Great is known as "the city that would not die." 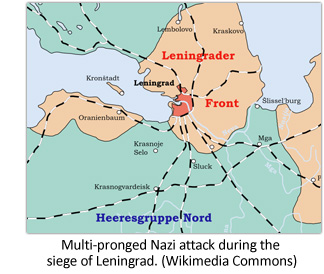 The story of Yevgeniya Buyanova must not be forgotten – a living history of mankind’s evil quest to destroy, and another of a community’s resolve to survive. Through her childhood memories of struggle, endurance and determination, we can appreciate the strength of survivors who endured the cruelest circumstances and continued to practice kindness and generosity. Yevgeniya wistfully recalls sharing cabbage leaves growing nearby with a friend, and an 8-year-old orphan invited to stay in her kitchen, who years later as a soldier returned to pay his respects.

Though little could distract Leningrad's citizens from the relentless Nazi cruelty, the love of music was a saving grace. Even when the musicians were weak and barely standing, they tried to boost morale and performed for those worse off. Music allowed them to believe there is still beauty in the world. Most memorable was Dmitri Shostakovich’s Symphony #7, the great heroic symphony entitled “Leningrad.”

Finally, on January 27, 1944, German troops were defeated. U.S. President Franklin Roosevelt credited "the sacrifice of Leningrad" for helping to bring about the end of the war.

The 872-day siege of Leningrad had become the longest and most destructive siege in history. By the summer 1942, the bombings had damaged or destroyed most of the city. Factories, schools, hospitals and historic landmarks were destroyed by air raids. The siege was also unprecedented in terms of casualties. Before the invasion in 1941, Leningrad's population was nearly 3 million; by 1944 only 546,000 remained alive. It seemed that nothing survived but the dirty, cold, tundra – leaving a dark blanket of death and snow.

Being a Jew in Leningrad was difficult and dangerous. Jewish customs were not practiced, and in most cases, not even known. If anyone noticed and reported that Jews were following traditions such as lighting Shabbat candles, they would lose their job – or worse. Many innocent Jews were sent to prison and perished, never to be heard from again. After the war, the Soviet government prosecuted a criminal case against many Jews by fabricating a story that Jewish doctors had planned a conspiracy to kill Stalin, but it was never proven.

In an attempt to shield her from anti-Semitism, Yevgeniya's parents didn't tell her she was Jewish. Then, on May 14, 1948, when David Ben-Gurion proclaimed the Jewish State of Israel, 11-year-old Yevgeniay went off to school – only to be taunted by classmates: "Go to Israel! Go to your Israel!" Yevgeniay did not understand the reference to "your" Israel. When she returned home, her parents confirmed that they are indeed Jewish.

When you are on the verge of extermination, wealth is nothing compared with life and love.

The living conditions in the city were difficult, with people were literally living on top of one another. "The apartment where we lived was shared with 12 other families," Yevgeniay explained. Each family had one room, sharing two half-bathrooms and a large kitchen. These conditions were normal and widespread in the city. "There was almost no privacy, but we survived," she says. "In order to shower, everyone went to the public sauna. One day at a time, each day, we were glad to be alive." 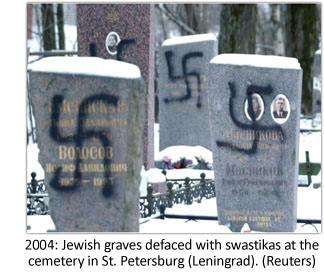 Seeking to leave the horrors behind, the city of Leningrad was rebuilt as St. Petersburg, where elegant museums, cathedrals and palaces now glimmer. But how did the survivors of this dark time find the will to continue living, to rebuild a shattered childhood?

“Our friends helped one another. We survived by having compassion,” said Yevgeniya, whose mother saved a neighbor by sharing their bread allotment. “When my sister died, I decided that I must live for her. When you are on the verge of extermination, wealth is nothing compared with life and love.”

In 1985, Soviet leader Mikhail Gorbachev brought government reform, removing obstacles for citizens who wanted to leave the country. Together, the small Jewish family immigrated to the United States, where they live today in metropolitan Washington, D.C.

For Yevgeniaya, these memories are etched inside her soul, on the lines on her face, and in the shaky voice with which she speaks. Yevgeniya’s memory of hunger still burns strong today, when she watches with scorn at all the wasted food that could have saved lives in those days.

Anyone who witnessed the atrocities in the hell of Leningrad can never be the same. But Yevgeniaya endured. “Life is fragile. All my life I tried to do good things, because I remember who I left behind. The memory of the fallen kept me alive.”

Embracing the Tears and Joy: My Life as a Widow

My Five Weeks with Cancer

My Father, The Alchemist

Football Victory: A Yom Kippur Story
Scientific Curiosity and the Divine Encounter
Mind Over Milkshakes
Love the Convert
Comments
MOST POPULAR IN Spirituality
Our privacy policy
Aish.com Is Looking for Great Writers