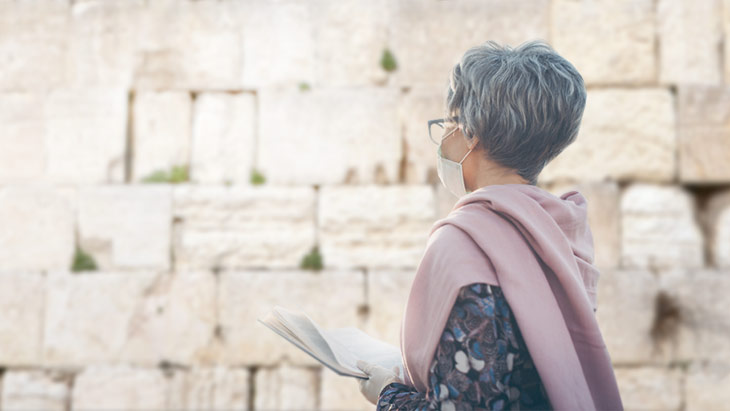 What the siege of Jerusalem teaches us about the Covid-19 siege.

When the Babylonians, and later the Romans, wanted to conquer Jerusalem, they did not mount a direct assault. The city, fortified with thick walls, was too strong for that. Instead they laid siege to the city. No one could enter or leave. After a period of time, starvation weakened the populace. And that led to infighting among the different political groups. By the time the enemy actually attacked and breached the walls, the defenders were too weak to resist.

A siege works in four stages: 1) it prohibits movement in and out, which leads to 2) people lacking basic necessities, which leads to 3) internal strife and civic unrest, which leads to 4) inability to defeat the enemy when it finally invades the city. Before the Roman army besieged Jerusalem in 70 C.E., the Jewish capitol was one of the largest cities in the ancient world, with a population of 100,000 and massive stores of grain and water. But as the siege proceeded, the Jews became even more divided into what modern parlance would call “left” and “right.” Extremists set fire to the grain storage in an effort to radicalize the moderates to fight the Romans. Starvation and internal strife so weakened the populace that by the time the Romans broke through the walls, the bonds between the Jewish inhabitants had already been severed, leading to the destruction of the Holy Temple on Tisha B’Av.

The Covid-19 pandemic has laid siege to the world.

The Covid-19 pandemic has laid siege to the world. Physical movement is restricted, with the borders of many countries closed, and whole populations prohibited from leaving their homes. The virus’s toll has been severe, with some 16,000,000 people infected and over 645,000 dead to date. Efforts to stave off the disease by lock-downs have created financial havoc. An untold number of businesses have gone bankrupt and whole industries face collapse, as the unemployment rate surges. As in the sieges of old, populations suffering for lack of their basic necessities degenerate to infighting and civic unrest. Domestic abuse has soared. This is how people act when they feel that there’s no way out.

But the word “miracle” was never mentioned. We Israelis gave credit to our Prime Minister and to our societal self-discipline, since we are used to dealing with catastrophic threats.

During this second wave, however, the Covid-19 siege has weakened and divided us. With 33,159 active infections and another 255 deaths since the start of the second wave, the country is vociferously divided between those calling for a lock-down and those insisting that the financial debacle will have a worse human cost than the disease. Every night protestors against the government – small groups, but vocal – take to the streets. The government itself is divided as to which measures to impose. On the same day that the Minister of Health threatened a total lockdown, the Knesset Coronavirus committee opened everything, including public pools and gyms.

The Siege that Didn't Succeed

In the 8th century B.C.E., the mighty Assyrian Empire, which had conquered today’s Turkey, Iraq, and Syria, decided to conquer the land of Israel. It defeated the ten tribes of the Northern Kingdom of Israel, sending its inhabitants into exile (which have become known as the “Ten Lost Tribes”). Several years later the Assyrian army marched south to the smaller and militarily weaker Kingdom of Judah, comprising only two tribes. Sennacherib and his army laid siege to Jerusalem in 701 B.C.E.

The situation looked bleak, but the Prophet Isaiah prophesized that the city would not fall. The king of Judah at the time was the righteous King Hezekiah. In the British Museum today is a clay hexagon from that period describing Sennacherib’s military victories. It includes an inscription boasting of the siege of Jerusalem: “Hezekiah, King of Judah, I locked in Jerusalem, like a bird in a cage.”

The siege, however, did not succeed. The Bible (Kings II, 19:14- 19) describes how King Hezekiah went to the Holy Temple and prayed:

Hashem, God of Israel, … You alone are God of all the kingdoms of the world. You made heaven and earth. … Hear the words of Sennacherib that he has sent to insult the living God! Indeed, Hashem, the kings of Assyria have destroyed the nations and their land. … Now, Hashem our God, save us please from his hand, then all the kingdoms of the world shall know that You alone are God.

That very night God struck the Assyrian camp with a devastating plague. The few troops that survived, and Sennacherib himself, fled back to Assyria. The Kingdom of Judah flourished for another 115 years.

From Hezekiah we learn that prayer can break a siege. Turning to God, who controls world history, is the road to redemption. When the Babylonians threatened Jerusalem in the 6th century B.C.E., the Jewish ruler turned to political alliances with Egypt to save the nation. Despite the Prophet Jeremiah’s remonstrations that only God can save, misplaced faith in political and military solutions led to the siege and fall of Jerusalem.

Of course, claiming that God can break a siege begs the question of who allowed the siege in the first place. Monotheism asserts that God is the only operative force in the universe. While human beings have free will in the moral sphere, only God determines what will ultimately happen.

Once, a young man visited Aish HaTorah in Jerusalem and went to meet its head, Rabbi Noah Weinberg. He told Rabbi Weinberg that he didn't need to attend a yeshiva because he and God were already extremely close. He told the rabbi how he was riding his motorcycle along a winding mountainous road when on oncoming truck forced him to veer off the road. He plunged to what should have been certain death. Instead, he miraculously survived with minimal injuries. “So you see God and I are super tight," the young man said.

Rabbi Weinberg replied, “And tell me, who do you think pushed you off the cliff?”

God sends multiple wake-up calls, but humanity can press the snooze button only so many times.

The Prophet Jeremiah repeatedly told the people that their wrong actions – murder, idolatry, and adultery – were taking them in the wrong direction.

God would block this spiritually self-destructive course of action by sending a strong foe to rout them. If they reversed course, they would be saved. This is how history operates. God sends multiple wake-up calls, but humanity can press the snooze button only so many times.

The Covid-19 siege has stymied the world. Faith in political leaders, scientific experts, and economic rescue plans have so far failed to solve the crisis. Even as we hope for a vaccine to protect against the virus, alarming cases of reinfection are causing questions as to how long immunity against this deadly virus can last. The partial collapse of the economy is leading people to fear that they will be unable to pay for rent, mortgage, or even food. Amidst the screams of protest and cries of pain, we can hear echoes of the prophet’s voice calling us to take a spiritual inventory and turn to God.

When there’s no way out, there’s always a way up.

Just as communication is the basis of a good marriage, prayer is the basis of a relationship with God. In addition to the time-honored prayers of the siddur [the Jewish prayer book], you can pray to God in your own words, in your own language. Privately speaking to God out loud in your own words is called hitboddedut. Pour out your heart to God. Tell Him what you are feeling, or fearing. Acknowledge that He is in control, and appeal to Him for help, confident in His love for you. But always start your alone time with God by thanking Him for what you do have – your sight, your hearing, your ability to think, etc. We should be thanking God for every breath. This is particularly pertinent during Covid-19.

Prayer is based on the recognition that God can intervene in human history. To be sure, this is how God chose to introduce Himself to us with the first of the Ten Commandments at Mt. Sinai: “I am the Lord your God who took you out of the land of Egypt, out of the house of bondage.” Read: I love you and will intervene in history for your benefit.

When there’s no way out, there’s always a way up.

With thanks to Ken Spiro for his book, Crash Course in Jewish History.