Should We Tell Grandpa? 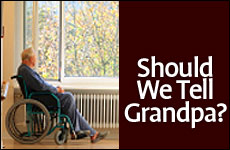 Telling a sick person of a death.

My wife's mother died last week, but we did not inform her father because of his precarious health. Is this approach sanctioned by Jewish law?

Your situation is a common one. Regardless of the age at which someone dies, there are often surviving relatives that are elderly or very ill (or both). Since there is a clear empirical connection between health and emotional state, the question often arises whether a weak person whose health might be severely compromised by the news, should be told of the passing of their relative. From the point of view of Jewish law, this issue is particularly complicated by the obligation of survivors to mourn for first degree relatives, particularly the obligation to "sit" shiva."

The Code of Jewish Law (1) deals with this exact question. In a short chapter entitled "A Sick Person Whose Relative has Died," the Shulchan Aruch teaches us several principles:

If the close relative of a sick person dies, he is not informed lest he become very agitated. We do not rend his garment [for him] and we do not cry or eulogize [the dead] in his presence so as not to break his heart. Additionally, the comforters [who have come to visit other mourners] are silenced when in his presence.

The Aruch Hashulchan, a late 19th century compilation of Jewish law written by Rabbi Yechiel Michel Epstein, explains the practical applications of this section.(2) From a Jewish perspective, preserving life takes precedence over almost all other mitzvot [commandments]. (3) If a person were to be ill enough that hearing about the death of his relative might endanger his life by weakening him, he is simply not informed. While one might presume that the deathly ill person (4) is not informed because of the grief that losing a close relative will cause, Rabbi Epstein explains that this is not the case. One may not even cry or give eulogies over an unrelated party in the presence of the ill person, because in his condition, the thought of death will bring him to agitation. We worry that he will hear about the death of someone else and worry that he is next.

This prohibition extends even to his mother and father, for whom he has the greatest obligation to mourn. Even if he knows that they have died, we still do not tear his clothes for him, perhaps because the physical act of "kriah" (tearing one's clothes upon the death of a first degree relative) will emphasize the reality of the loss in an emotionally stronger way than he understood it previously. We even fear that the uninformed mourner will sense the loss if he is asleep! (5)

ne may not take any action that will endanger the life of another.

This rule applies beyond just deathly ill patients. Rabbi Yehoshua Neuwirth rules that even a "seriously ill" patient, even if he is not dying, should not be told of a relative's death. (6) Based on the rationale of the Aruch Hashulchan, this rule may be applied even further. Rabbi Epstein explains that because saving a life supersedes almost all other obligations, the requirement of the mourner to say kaddish and even some of the requirements to honor a dead body are pushed off in order to avoid upsetting someone who could become otherwise endangered. (7)

For example, 300 years ago, Rabbi Jacob Reischer, author of the Shevus Yaakov, (8) permitted a man mourning his sister's death to visit his father during shiva so that the father would not realize that his daughter had died. More recently, Rabbi Shlomo Zalman Aurbach, a preeminent 20th century posek (religious decisor), ruled that

if a mourner is obligated to visit a very seriously ill patient and there is a possibility that if the patient realizes that his visitor is in mourning his condition will worsen, it is obvious that the mourner must do everything necessary to hide the fact that he is in mourning.

Based on the ruling of the Shevus Yaakov, Rabbi Aurbach wrote that it "would appear, therefore... that he should dress normally and put on leather shoes." (9)

It becomes clear that our duty to avoid informing a sick person that their relative has died is only a subset of the greater rule that one may not take any action that will endanger the life of another. In our case, this would include sharing information, whether good or bad, with a very elderly person for whom one believes the shock might be harmful. Great care must be taken in deciding not just whether to tell, but how to tell, startling news.

It is clear that whether your relative is very sick, merely very elderly, or at risk of an adverse event if told of the death of his wife, it is clearly appropriate to withhold the information. Nevertheless, it is important to discuss your particular case with a competent halachic authority. On a practical note, if you are not informing your relative, you must be careful that you are able to ensure that no one else will inadvertently inform him in a way that might cause even greater danger to his health. (10)

The Age of the Universe: One Reality Viewed from Two Different Perspectives

The Song of the Pomegranate

Steven Weinberg and the Twilight of the Godless Universe
For Every Individual, A Torah Scroll
Allegiance To The Monarch
Meet the Real You: Yom Kippur
Comments
MOST POPULAR IN Current Issues
Our privacy policy
Aish.com Is Looking for Great Writers