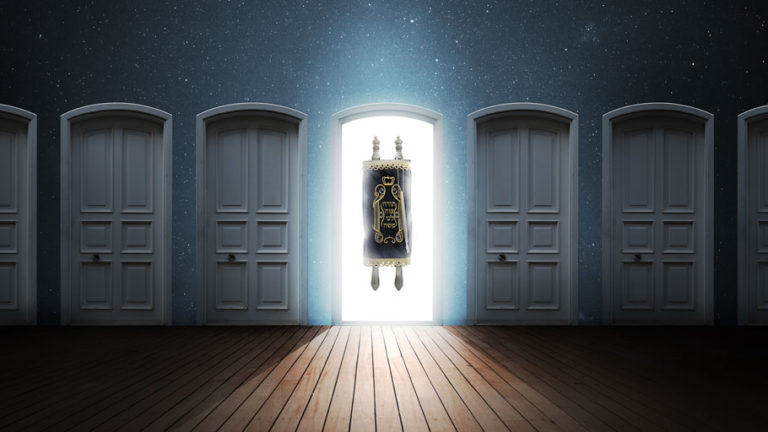 This Thanksgiving, let’s give thanks to the Jewish people.

“The Jews started it all – and by "it" I mean so many of the things we care about, the underlying values that make all of us, Jew and gentile, believer and atheist, tick. Without the Jews, we would see the world through different eyes, hear with different ears, even feel with different feelings. And we would set a different course for our lives… Their worldview has become so much a part of us that at this point it might as well have been written into our cells as a genetic code.”

--- Thomas Cahill, The Gifts of the Jews

The number of fundamental ideas and values the Jewish People have given to the world is truly remarkable. And it’s also remarkable how most people don’t realize this.

We simply forget that these concepts and ideals were once not the way of the world. In fact, they were not only revolutionary but often at complete odds with conventional wisdom of the times. As Paul Johnson wrote in The History of the Jews, “All the great conceptual discoveries of the intellect seem obvious and inescapable once they have been revealed, but it requires a special genius to formulate them for the first time. The Jews had this gift.”

In the spirit of Thanksgiving, let’s stop to appreciate some of the Jewish inventions taken for granted in our world:

1. Sabbath Day: The Romans ridiculed the Jews for their idleness but we have none but the Jews to thank for our weekend. Until the Jewish invention of Sabbath, every day, every month, every year was the same. We introduced the concept of taking out time to focus on the higher things in life and enjoying being and not just doing. Christians adapted the Jewish Shabbat to Sunday in the 2nd and 3rd centuries.1

2. Peace on Earth: In a world that revered the warrior above all others, survival of the fittest was the highest value. If you could get it, you took it. The cost in human life was irrelevant. Judaism introduced the altruistic concept that peace amongst men was preferable to my tribe’s enrichment.

As the prophet Isaiah wrote, “The wolf will live with the lamb, and the leopard will lie down with the goat; the calf and young lion and fatling will be together, and a little child will lead them” (11:6).

And “They will beat their swords into plowshares and their spears into pruning hooks. Nation will not take up sword against nation, nor will they train for war anymore” (2:4).

3. Universal Literacy and Education: In a world where literacy was a luxury enjoyed by the vast minority, the People of the Book taught that the pursuit of wisdom and learning was the highest pursuit and the right and obligation of every child and adult. No Jewish community existed without a school. Even the Greeks and Romans came nowhere near creating a written culture, 2 and the medieval world saw even greater drops in literacy. The Church, ancient Greece and the United States not only discouraged literacy for some (e.g. Blacks, slaves, non-clergy), but it took until 1918 for every US state to require students to complete elementary school. 3 It took India until 2009 to adopt what the Jewish nation has been practicing for 3,500 years.

4. Sabbatical Year: The idea for academics and some professionals (20% of UK companies now have a career break policy, and many more joining the trend! 4) to take a year off every seven years to focus on academic advancement, comes directly from the Torah. Judaism requires every farmer to take the entire seventh year off from work to focus on studying, self-improvement and inspiration. One can imagine the impact of that intellectual focus on the entire nation.

5. Justice for All: In a world where women, children, the poor, immigrants and other vulnerable members of society were systematically abused, the Jewish legal system was the first to protect the rights of the underdog and the helpless. As the Torah states, “You shall not wrong or oppress a foreigner, for you were strangers in the land of Egypt. You shall not abuse the widow or orphan. If you do abuse them, when they cry out to me, I will surely heed their cry” (Exodus 22:21-23).

Jewish law ensured that every man and woman has the right to a fair trial, is innocent before proven guilty, and allows for no prejudice towards the rich or powerful.

6. Monotheism: Judaism revolutionized the concept of God; from a belief in multiple deities and idols that require our sacrifice (even humans), are created in the image of Man and can be bribed and manipulated, to recognizing the One Infinite, loving, altruistic Creator who is the unifying source of the entire universe, who needs nothing from mankind, and is equally available to every human being.

7. Infinite Value of Every Human Life: In a world of human sacrifice, murder of children (particularly baby girls), and wanton war and killing to further material gains, Judaism taught that every life is holy, created in the image of God, and of infinite value – even the old, the mentally or physically handicapped and the sick. If you think that is obvious, consider the practice of human sacrifice that was central to most South American civilizations until the Spanish Christians conquered them just 500 years ago.

8. The Right to Life, Liberty and the Pursuit of Happiness: While the founding fathers of America may have found “these truths to be self-evident”, in fact it was far from self-evident unless you were highly influenced by Jewish values (otherwise the Declaration of Independence in 1776 would not have been so revolutionary!). Many societies up to modern times have sought to limit individuality in the name of service to the state or religion or feudal lord (Communism, Nazism, many religions and all totalitarian regimes). But 3,000 years before 1776, Judaism introduced to the world that every human has the right, and obligation, to aspire to reaching his/her goals, personal fulfilment and potential.

9. Limited Governmental Powers: It took until the Magna Carta in medieval England for the first small limitations on the power of the ruler to be instituted. Until then despots of all kinds could and would take advantage of their citizens monetarily, militarily and judicially for their own gain. The king was omnipotent. The Torah was the first system to place limits on the powers of the monarch. His powers were overseen by an independent judicial branch of government (Sanhedrin/Supreme Court), thousands of years before the rest of the world was ready to adopt these ideas. And the Jewish king carried with him a Torah scroll, reminding him that he too is subjugated to all of its laws.

10. Tzedaka and Tikkun Olam: In a world where the idea of giving away one’s property to others was seen as both bizarre and foolhardy, Judaism taught that we are obligated to donate 10-20% (tithe) of what we earn to make the world a better place. Judaism was trend-setting by millennium when it required us to lend money to our fellow man with no interest, to return lost objects, to refrain from verbal abuse and gossip, not to take revenge or bear a grudge, to protect animals from suffering, and to demand that we love every human being regardless of race, religion or color. "Love your neighbor as yourself" (Lev. 19:18) was introduced 2,000 years before Christianity.

11. Sexism: Judaism taught that men and women are equal in the eyes of God (in fact the first “Man” was not actually a man but an androgynous male/female being which was then separated into two). From the earliest times women have held important leadership positions in the Jewish world. Our matriarchs were considered even greater than their husbands in prophecy and other areas. Judaism forbade sexual harassment of any kind. Way ahead of its time, a woman’s rights to sexual and emotional intimacy were enshrined by the first Jewish marriage contracts (ketuba). Men are obligated to honor their wives even more than themselves. Women in Judaism enjoyed more rights than in most of Western civilization. For example, it took until 1900 for all US states to allow women to buy, sell and own property or to write her own will and contracts.

Without the Jewish nation, the world as we know it would simply not exist. Paul Johnson summed it up beautifully: "To them (the Jews) we owe the idea of equality before the law, both divine and human; of the sanctity of life and the dignity of the human person; of the individual conscience and so of personal redemption; of the collective conscience and so of social responsibility; of peace as an abstract ideal and love as the foundation of justice, and many other items which constitute the basic moral furniture of the human mind. Without the Jews, it might have been a much emptier place."

And while the world was busy absorbing Jewish inventions into their culture, they were simultaneously persecuting and not infrequently attempting to destroy us. How strange that one of humanity’s most positive contributors has been singled out for more hate than any other. Cahill observed this phenomenon: “Our history is replete with examples of those who have refused to see what the Jews are really about, who – through intellectual blindness, racial chauvinism, xenophobia, or just plain evil – have been unable to give this oddball tribe, this raggle-taggle band, this race of wanderers who are the progenitors of the Western world, their due.”

This Thanksgiving, let’s follow the lead of American President John Adams, who said, "I will insist that the Hebrews have done more to civilize man than any other nation. If I were an atheist, and believed in blind eternal fate, I should still believe that chance had ordered the Jews to be the most essential instrument for civilizing the nations.”