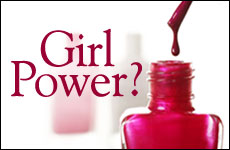 How the media is damaging the self-esteem of young girls.

In September 2004, Dove did something radical for a player in the beauty industry: it launched an ad campaign that didn't feature the typical size-0 model, but real women who clearly defied the starlet-skinny chic that had come to represent the media "ideal" of the female form. Dove also encouraged women to share their ideas about the campaign on their web site, hoping to stimulate discussion about beauty, whose definition had become narrower than the pencil skirts displayed in fashion magazines.

Seven in 10 girls feel inadequate about their looks, performance in school, and/or relationships.

"Low self-esteem among girls and young women has reached a crisis level," said Dr. Ann Kearney-Cooke, Ph.D., a psychologist who collaborated on Dove's Real Girls, Real Pressure national report on the state of self-esteem. The report revealed that seven in 10 girls feel inadequate about their looks, performance in school, and/or relationships. Most disturbing, girls with low self-esteem are engaging in harmful and destructive behaviors that can leave a lasting imprint on their lives. These include disordered eating, cutting, smoking, drinking, and bullying. "This report confirms the dangerous consequences arising from hang-ups about looks, academics and popularity on a girl's sense of self-worth and self-acceptance," she adds.

Dove's research doesn't come as a surprise to anyone in the field of mental health today. Dr. Barbara Becker Holstein, Ed.D. is the author of two books on girls' self-esteem: The Truth: I'm a Girl, I'm Smart and I Know Everything and The Enchanted Self. Holstein notes that in her 25 years as a practicing psychologist, the pressure on tweens and teens to look sexy has intensified greatly. She also sees a corresponding decrease in girls' ability to access positive thoughts about themselves and their skills. Too often, she says, girls and women have a warped view of how they really look.

"I counseled a 17-year-old girl who was tall and gorgeous, but she felt gawky. She hid under long hair that covered her face, and needed her mom to speak for her. If girls somehow get the message that they don't ‘rate,' they can really suffer from body image problems," she observes.

Holstein believes that females suffer more acutely from media influence than boys because they internalize messages around them more easily, whether those messages come from home or outside. As a result, the trend of young girls dressing in risque clothing that a generation ago would only have been worn by streetwalkers exacerbates the problem. "We've lost that feeling that a woman is a queen in her own right," she says.

Lyn Mikel Brown, professor of education at Colby College in Waterville, Maine, has documented the confusing and negative messages that marketers send to girls in her book, Packaging Girlhood. "They want to sell a message of ‘girl power' but the products and clothes aren't about changing the world, they're about the look of the girl, which is increasingly ‘pinkified' and sexualized," Brown says. "‘Tween' is a marketing term used to encourage younger and younger girls to self-objectify, often aiming for a model of a girly Paris Hilton or Brittany Spears."

Brown says that while many parents worry about protecting girls from being bullied, they are also purchasing the very merchandise that undermines a girl's sense of self. "The pinks quickly turn into hot pinks and reds, which are used to sell everything, even pink energy drinks that contain an herbal appetite suppressant," she notes.

When speaking to parent groups, Brown tries to raise awareness about the subversive impact of current marketing on girls' self-esteem. This includes not only the sexualized clothing, but also popular books for tweens and teens featuring "mean girl" motifs. "Sisterhood is powerful is a slogan that is so in the past," Brown notes. Her organization, Hardy Girls, Healthy Women hopes to foster a healthier sense of self for girls, and includes resources and suggested questions for parents to ask their daughters to help them both think more critically about media influence.

"We can't stop the media, but parents have a lot more control over this than they realize," Brown believes. Holstein agrees, and urges parents to talk frankly with their daughters about how some of the current fashions make them feel. If a girl just shrugs and says, "That's the way everybody dresses," she advises parents to counter, "Let's find the very best choices so you can be comfortable."

"You have to give girls a true base from which to make good decisions about what they wear and what media they consume," Holstein says. "Parents may shy away from these discussions because they fear sharing too much, but there are ways to share what is right and true without over exposing your own feelings or your own past."

When a girl feels good about herself, body image will fall into place.

But according to Gila Manolson, a Jerusalem-based author of The Magic Touch, Outside/Inside, and Head to Heart, and an internationally renowned speaker, "Body image is a red herring. The real issue is soul image, because when a girl feels good about herself as a person, her body image will fall into place." Manolson notes how striking it is that some young women with whom she has spoken and who are average-looking and even "Rubenesque" in figure consider themselves beautiful, even sexy. "These girls exude the confidence that comes from having a healthy soul image," Manolson observes. "And confidence is very attractive."

Manolson admits that it's far easier to develop a healthy soul image in Jerusalem than in New York or Los Angeles. Still, "I believe that parents influence a girl's self image more powerfully than all the media," she says. "The media project images of non-existent women. Any woman who had Barbie proportions would have died of malnutrition."

Her prescription for healthier body images among girls is more drastic: "Disengage from the media," she counsels. "Fashion and women's magazines are toxic to female self-esteem." Because these magazines only feature "perfect-looking" women (whose images have all been airbrushed and digitally manipulated), having these magazines in the home "is like an IV dripping heroin in a girl's veins. Many studies have shown very clearly that the more exposure women have to these magazines, the lower their self-esteem falls, while men's satisfaction with their wives also drops after viewing this material."

When Manolson speaks to women on these topics, she's often asked about how to deal with men, who now have unrealistic and shallow expectations about female beauty. "It's a painful subject, and men need a huge reeducation about this. With every part of the body so readily available to view, we are losing the ability to have true intimacy, because women feel inadequate and men have unrealistic expectations. We need to recreate the idea of true intimacy based on appreciating another person's beauty, both inside and out."

Tzniut is an internal self-definition that frees the need to flaunt yourself physically.

Manolson believes that the Jewish concept of tzniut – modesty -- is the most powerful antidote to this problem. "Tzniut means deeply knowing who you are. It's an internal self-definition that frees you from any need to flaunt yourself physically," Manolson explains. "Women who possess tzniut have their physical privacy protected; they are simply not on display for ogling or judgment by the public's critical eye. The beauty industry feeds off women's insecurities, so the biggest enemy to that industry is a woman who has a healthy soul image and who carries herself with modesty."

All agree that true self-worth must come from within. In her practice, Holstein helps patients think of times in their lives when they felt good about themselves, and asks them to bring in things they have written or made that show their talents. She then helps patients build on this base to create a foundation of inner worth. "Too many women are only able to tune into messages they have gotten from the outside world, which too often do nothing to affirm their worth," Holstein says. "It takes more work to access the positive messages they've received in their lives."

Manolson also prescribes a steady diet of altruistic activity, being with friends, and reading worthwhile books to fill the time that women might have otherwise spent watching TV or reading women's consumer and fashion magazines. "There's nothing better for self-esteem than doing something for someone else. After a while, you'll be able to radiate happiness."

Beneath the Surface: A Deeper Look at Modesty
Were Adam and Eve Jewish?
How I Learned to Love the Multiverse
10 Big Jewish Inventions
Comments