Desperate for a Donor 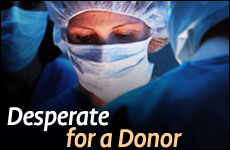 My mother's kidneys are failing. Will someone help save her?

A few weeks ago, we got the awful news about my mother.

Her kidneys are failing.

For the past 15 years, my mother has been taking a medication and we knew that it was slowly eroding her kidney function. She drastically changed her diet -- very low protein, drinking less fluids, and even trying natural remedies. In this way she was able to increase the lifespan of her kidneys.

But now the day of reckoning has come. And we are in frantic search of a kidney donor.

In one sense, dialysis is a marvel -- big machines that simulate kidney function -- purifying the bloodstream, removing toxic wastes, and regulating the blood. 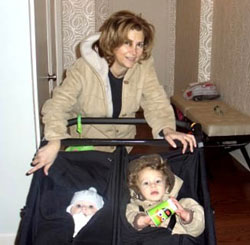 But dialysis is a tricky thing. It’s very rough on the body. Your entire system goes through an overhaul, leaving you feeling nauseated, dizzy and tired. My mother is 49 years young and is very active -- she rides her bike a few miles every day, and she’s a college English professor.

My uncle was on dialysis and died waiting for a transplant.

The other night we went out to dinner, and we all just burst into tears. My mother is very very scared.

Our goal is to find a kidney donor. But in the U.S. alone, 50,000 people are on the public waiting list. People can wait seven years for their turn, and in the meanwhile thousands die. Even after a long wait it's not so simple. One of our family friends was on the list for many years, but when his turn finally came, he was declared ineligible because he had been taking a certain medication. Life just slipped through his hands. And now he's back to waiting.

There's no way I'm going to allow you to be taken away from us.

I grew up with all four grandparents and it was such an important part of my development. My children can learn so much from my mother. I feel like that alone will help make her stronger and give her the will to live. I told my mother, "There's no way I'm going to allow you to be taken away from us."

The only hopeful option is for someone to step forward and volunteer a kidney. (People have two kidneys, and only one is needed to live a normal life.)

My husband has been networking every way he can, leaving no stone unturned. And he helped me to get a grip on my feelings and use everything I have to help my mother.

In the past weeks, we've heard many encouraging stories:

• One man who needed a kidney sent an email around to hundreds of people. It wound up in the hands of a popular radio host in New York. He talked about it on-air, and within a matter of days, 150 people had volunteered a kidney. As it turns out, only one of those 150 people was a match. They did the transplant and it was a success.

• The father of one of my childhood friends needed a kidney, and when one of his clients heard about it, she volunteered to give a kidney out of the goodness of her heart. She didn't have any children, and she saw this as her way to give life to another person. The transplant was successful.

• Two years ago at a Hadassah board meeting, an announcement was made that one of the women in attendance was in need of a kidney transplant. In a split second, another woman in the room decided that she would donate a kidney. Another life saved!

What would motivate a person to volunteer to help a stranger in this way?

Perhaps someone in their family had passed away from kidney disease, after waiting on the list. The surviving relative would gain a sense of peace and closure by helping to spare others the same fate.

I also believe that people have an innate desire to help others. That's the whole Jewish concept of tzedakah. The Talmud tells the story about a scoffer who came up to Rebbe Akiva and said: "You should stop giving money to poor people, because it was God who made them poor, and by supporting them you're going against the will of God!"

Rebbe Akiva answered, "Why do you think God made them poor in the first place? In order that we could help them!"

People often want to help others in a significant way, but don't have the financial resources to do so. For some, this may be a realistic alternative.

In 1999, when a 10-year-old Israeli girl desperately needed a lung transplant, an awareness campaign produced a lung donor -- a British man who happened to pick up a Jewish newspaper at his neighborhood supermarket. Years earlier, he had resolved: "So few people stepped forward to help the Jews during the Holocaust. So if I can ever save a Jewish life, I'll do so."

It is illegal in America and most of the world to buy a kidney from a willing donor. The law allows you to pay a donor's medical and travel expenses, and to compensate for time off work, but not to pay for the actual organ itself.

I understand that the law is designed to protect poor people, and I see how an unrestricted market of buying and selling organs could be a magnet for corruption. But on the other hand, this concern needs to be balanced with protecting the lives for those who are dying for lack of a donor.

The cost of kidney surgery is far less than the cost of dialysis.

Dr. Daniel Eisenberg wrote on Aish.com that even for society, allowing the sale of makes fiscal sense. The cost of kidney surgery is far less than the cost of dialysis, which runs about $50,000 per year. Perhaps the government could regulate the sale of organs, to protect against abuse. And if this would increase the number of lives saved, then Jewish law would sanction such an approach.

From our end, it's very frustrating to imagine my mother waiting on a transplant list -- where people are dying at the rate of 18 a day.

So we are urgently looking for a donor. In this case we've lost some crucial time; my mother knew the diagnosis for a few months before she told us, but because I had just given birth she didn't want to upset us. She didn't realize the urgency of the situation.

My mother's blood type is B+, which means she can accept an organ from blood-types O and B. The donor would also need compatible tissue type and blood antigens.

Adding to the urgency is that transplant surgery has a better chance of success if performed before the patient goes on dialysis. People have said that if you go for a transplant after years of dialysis, your body is all worn out, reducing the chance of a successful surgery.

It is best to use an organ from a live donor because things can be checked to make sure it's a perfect match. Also, organs from live donors are more effective than cadaver ones; a kidney from a living donor usually functions immediately, while with a cadaver kidney the patient may require dialysis until the kidney starts to function.

Health-insurance companies do not raise rates for kidney donors.

The reward of donating is so great, and the risk is low. As far as organs go, the kidney is relatively easy to remove, leaving the donor essentially unharmed. I saw a follow-up study that showed how even after 20 years, donors exhibit no increased health risks. Health-insurance companies do not even raise their rates for kidney donors.

And it's not often that one gets an opportunity to do something as significant as saving a life.

I heard a very beautiful story from Rabbi Hanoch Teller. It's the true story of a man whose kidneys were failing, and his cousin was a match. The cousin considered the idea of donating, but his wife discouraged him. Yet the cousin couldn't sleep at night, tormented by the thought that he would miss the chance to save a life. So, despite his wife's objections, he underwent the operation.

When the cousin awoke in the hospital after the operation, he saw the doctor standing over him. The doctor said that the operation was a success, but not in the way they had planned. Because when they removed the donor's kidney, they discovered a cancerous tumor which would have otherwise gone undetected. The doctor told the man: 'You came to the hospital today expecting to save a life. It turns out that through your generosity, the life you saved was your own.'

Those willing to donate a kidney to save a life, should please contact Renee at (718) 645-5109 or rdeastman@aol.com

The Time to Reinvest is Now

It’s Open Season on Jews in New York City
Why Are The Prayers Of Yom Kipur So Repetetive?
Ha'azinu 5783: A Time for Unity!
Twisted Thinking
Comments