With a Whole Heart: Ethics of the Fathers, 3:13 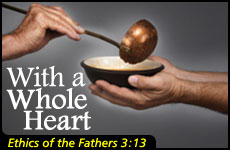 It is said that the great sage Rabbi Yisrael Salanter once found himself profoundly depressed over the spiritual shortcomings of his students and his community. As the high holidays approached, Rabbi Yisrael determined that he could not feel close to his Creator in the company of Jews who seemed indifferent to their own relationship with the Divine. He concluded that he had no choice but to go in search of more acceptable company.

Rabbi Yisrael traveled from village to village, praying with one congregation and then another. Finally, in a small synagogue in an unremarkable town, he found himself surrounded by individuals who seemed to take their prayers as seriously as he did. One parishioner in particular appeared to pray with such passion that he resembled an angel more than a human being. Rabbi Yisrael positioned himself directly behind the man to be better inspired by his devotion.

The High Holidays service began exactly as Rabbi Yisrael had hoped. The Jew who stood right in front of him swayed slowly as he prayed, the whispered words of the liturgy falling from his lips with a quiet intensity that made Rabbi Yisrael feel as if he were being drawn ever upward on his neighbor's coattails. When the man intoned, "I am mere dust and ashes before You," Rabbi Yisrael experienced a profound sense of his own humility before God.

When the time came for the reading of the Torah, the gabbai of the congregation began distributing honors among the notables of the community. First he called up a Kohein, and then a Levi. In his home town, Rabbi Yisrael would have received the prestigious third aliyah, but he had taken pains to preserve his anonymity and thought nothing of it when no honor was bestowed upon him. He assumed that the recipient called up for the third Torah reading was among the synagogue's most prominent members.

The fourth honor, as it happened, was bestowed upon Rabbi Yisrael's neighbor, from whom the sage had drawn such inspiration. Upon being called to the Torah, however, the man suddenly flew into a rage. "You called him third," he cried, pointing to the previous honoree, "and you only called me fourth? Who is he that I should be second to him?"

Astonished and appalled, Rabbi Yisrael rushed forward. "My friend, I can't believe my ears. Only a moment ago you were saying before the Almighty that you are only dust and ashes."

The man turned to Rabbi Yisrael, still furious, and declared, "Before God I am dust and ashes; not before him!"

Thus did even the great Rabbi Yisrael Salanter learn a painful lesson about jumping to superficial conclusions. He returned to his community and reapplied himself to the business of spiritual growth.

TWO PATHS THAT ARE ONE

There are those who neglect the first category, believing that it is enough to be "a good person," that one's relationship with the Almighty can be more casual and subjectively defined. This approach fails because, with no absolute authority to define what is good, every person will inevitably judge himself "good" in his own eyes.

Then there are those who neglect the second category, believing that if they are ardent in their relationship with God, then it is of no consequence how they relate to their fellow Jews. Rabbi Chanina addresses this second type of fallacy in our mishna.

The tablets received by Moses at Sinai are often depicted as heart-shaped, alluding to a fundamental lesson. Just as the heart has chambers on both the right and the left side to pump the blood efficiently through the body, so too does the Jewish observance require a two-sided approach.

THE SECRET OF THE TABLETS

The first commandment is I am the Lord, your God; the sixth (which is the first on the second tablet's group of five) is the prohibition against Murder. Only by acknowledging that there is a Creator who fashioned every human being in His image can one rationally explain why eating steak and swatting flies is any different from shedding human blood. Without such a distinction, we should all be either Vegans or serial killers.

The third commandment is the prohibition against Taking God's Name in Vain; the eighth is the prohibition against Stealing. The Almighty placed everything in this world for our use, conditional only upon recognizing that everything comes from Him. To misuse His name is to fail in that recognition, rendering all benefit from the material world the equivalent of theft.

The fourth pair of commandments includes the requirement to honor and keep the Sabbath, and the prohibition against Bearing False Witness. Since the Sabbath testifies to the creation of the world, one who violates it is in effect testifying falsely against the Creator.

The final pair includes Honoring Parents and the prohibition against Coveting, or seeking to acquire what belongs to one's fellow through manipulation. Although the former appears to belong in the category between man and man, it teaches us to appreciate that our parents are the connection between us and our Creator. Just as parents withhold from their child that which they believe is not good for the child, similarly will God withhold from each of His children that which may not serve their spiritual best interests. One who internalizes this will never feel envy toward his neighbor.

The Torah commands us to serve the Almighty "with all your heart," suggesting that our service of God is imperfect as long as our relationship with others is incomplete. Rabbi Chanina is not suggesting that we curry favor with our neighbors through flattery or bribery. Rather, he comes to teach us that through genuine concern for our fellows we will transform ourselves into Godly human beings.

Who Is Rich? (part three)

Mastering The Gratitude Attitude
Why Are The Prayers Of Yom Kipur So Repetetive?
Ha'azinu 5783: A Time for Unity!
Twisted Thinking
Comments