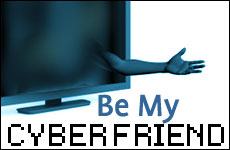 How can I join Facebook if I don't have any cyberfriends?

Making friends isn't as easy as it used to be. In the old days, you met someone at work, a party, or a class, struck up a conversation, and voila! A friendship was born. But that is so retro. Today's friendships are happening online, on MySpace, Facebook, SmugMug, Friendster, Frappr, and other social networking sites. In fact, in the time it took me to type that sentence, five new social networking sites went live, most of them with names that are also missing vowels.

It would seem that just by sending emails to the right people, you, too, can become popular. But since you are now judged not by the company you keep, but by volume, the pressure to collect friends is intense. Unless you have at least 458 friends on one of these sites, you might as well ship off to Embarrass, Minnesota.

I found it tough enough to pay attention to the friends I already had, so I vowed to sit this whole cyber-friendship thing out. I needed to go hunting for a new social quarry online like I needed another orthodontist bill. But business networking experts keep insisting that online social networking is critical to one's career success. My resistance weakened, but hadn't yet caved in. Then one day I received this email:

"Ben added you as a friend on Facebook. We need you to confirm that you are, in fact, friends with Ben."

Well, I thought, if invitations were going to start pouring in this easily, I'd hop on the cyber-friendship train. I immediately registered with Facebook to confirm that Ben was, in fact, my friend. I had known the guy for 15 years, and was flattered by his invitation. After all, it's not every 15-year-old who will ask his mother to be his friend on Facebook.

I viewed Ben's profile and saw that he had 92 friends on Facebook. I had a lot of catching up to do, and not just in scoring new friends. As his mother, it was my duty to look at all his friends' profiles and make sure there were no girls whose photos I thought were overly suggestive.

In less than two weeks, I had secured six Facebook friends, and three of them were my kids

After approving Ben's friends, I began a targeted marketing effort to become popular online. In less than two weeks, I had secured six Facebook friends, and three of them were my kids. One was my next door neighbor, David; one was my web designer; and the last one was a guy named Rich whose photo was taken while he was riding an elephant. I'm not sure I know him, but he had the same name as a guy I used to work with, and it wouldn't surprise me one whit if that guy would have ended up riding elephants.

One day, while "managing" my small group of friends online, I "wrote on the wall" of one of my son's pages to say hi. I still hadn't figured out how to expand my online social circle, and I was running out of children and next-door neighbors. My son wrote back on my wall: "Mom, the fact that you only have six friends is making me reconsider our Facebook friendship." Would he actually delete me as a friend for my paltry social status? He wouldn't dare. He is still too dependent on regular cash infusions from the Bank of J. and J. Gruen.

Although I thought that belonging to Facebook made me at least a little bit cool, I was disabused of this notion by one of my kid's friends. He sniffed, "Facebook is for older people. Cool people are on MySpace, ShoutWire, or Wetpaint." Adding insult to injury, he said this while taking a third helping of pizza from my dinner table.

I went though my email contact list, looking to see if I could "upsell" a mere contact to friend status. I found a few already registered, and am now waiting anxiously to see if they will accept my invitation to become friends. If they do, I'll be up to nine friends, only 83 behind Ben.

Sometimes I wonder: where are the Jewish social networking sites? I can just imagine what would happen if there were sites called "Gefilteface," "Yidster," or "Guiltbook." Turf wars would break out, and invitations to join "Gefilteface" would be met by "Feh! I wouldn't join that site if you paid me!" Better we should keep it the way it is, non-sectarian. Besides, there wouldn't be enough space on the walls for all the notes that people would try to shove in.

I can just imagine what would happen if there were sites called "Gefilteface," "Yidster," or "Guiltbook."

I suspect that despite my efforts, this whole business of collecting "friends" like kids used to collect baseball cards or marbles is just too complicated, too silly, and too nosy. You have to divulge how you know people, checking the appropriate box: "We went to school together." "We dated." "We worked together." "We lived together." "We flew a bombing mission together over Vietnam together."

Oh, good news! I just got an email saying that Aaron has just agreed to be my friend! We were college buddies, studying Shakespeare together. Now I have seven friends!

Perhaps if I post an intriguing photo of myself on my page – perhaps, like Rich, posed on an elephant – I'll attract new relationships. But I'm also willing to concede defeat and go back to "managing" my friendships the old fashioned way: sending emails, text messaging, trying to reach them on their cell phones, and occasionally, seeing them in person.

Now I'm off to an urban safari, hunting for a stray elephant who will let me take a picture of the two of us. I don't know why I didn't think of this before. Imagine how thin I'll look while perched on an elephant!

Weighed Down
Korach 5782: Visit to Lift the Spirit
That Time The Ivy League Found A Way To Limit Jewish Enrollment
Would You Rather Be Right or Happy?
Comments
MOST POPULAR IN Jewlarious
Our privacy policy

Korach 5782: Visit to Lift the Spirit
That Time The Ivy League Found A Way To Limit Jewish Enrollment
Would You Rather Be Right or Happy?
Korach’s Unique Punishment
Who Was Josephus? The Controversial Backstory of the Famed Historian
Should I Break Up, Get Engaged or Keep Dating?
Time Is Your Precious Commodity
Can a Moral Truth Ever Change?
The Abortionist of Auschwitz
Manischewitz Jello Mold Recipe
1 2 3 … 2,947 Next »