Not So Trivial Pursuit 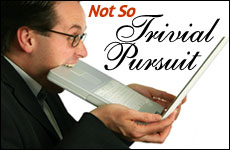 Maybe winning really is everything after all.

"What breed of dog is Scooby Doo?"

How about this one?

"Who was Riddick Bowe fighting in a heavyweight title bout when a parachutist landed in the ring?"

Would you like some more questions? Believe it or not, most people answer, "Yes." Perhaps some of you are even a bit upset because I am not providing you with the answers to these two compelling questions.

I know this because I recently journeyed to California on a Delta Song flight. One of the special features of this airline (besides discount prices), is the opportunity (opportunity?) to play an electrifying trivia game against your fellow passengers. You press Start on the screen in front of you, enter your name (real or fake) and Eureka -- you're in on the ACTION.

One at a time, 20 questions pop up and you score points for accuracy and yes, even speed.

How long would it take you to remember:

"Where was Dolly Parton born?"

After each question, the top ten players and their scores are revealed to all, so you can gauge your position in the contest and chart your winning strategy.

Why would anyone even remotely be interested in which town The Flintstones lived in? Or whether Dr. Spock came from Vulcan or Klingon or Krypton or the Bronx, for that matter?

And so, I shifted my attention away from that nonsense, tapped the screen again, and landed on the ever-stimulating CourTV channel; which largely explains why I somehow found myself back at the trivia game.

And then it happened. It occurred to me, that the inhabitants of Minute Maid Park were probably the Houston Astros, so... just for kicks ...I pressed choice 3. Well, it was like hitting the jackpot at a Vegas slot machine.

500 POINTS!!! THAT'S THE MOST YOU CAN SCORE ON ANY SINGLE QUESTION!

In seconds, the standings appeared and there I was in second place! Apparently a new game had just recently begun, and I was in the thick of it. I felt my heart race. I watched myself deposit my Diet Pepsi can in the seat back pouch so I could remove all distractions and hunker down for battle.

It could be darts, or Boggle, or ping pong with your six-year-old niece. It doesn't really matter. We like to win.

I won't bore you with the details of my ultimate defeat (I finished ninth), but my post-game self-analysis was anything but trivial. Simply put, it's all about winning. It could be darts, or Boggle, or ping pong with your six-year-old niece. It doesn't really matter. We like to win. We need to win. We MUST win. And so...we play.

It reminded me of a local sixth grade teacher that I recently heard about. Apparently he understood this phenomenon very well. To keep his students interested and motivated, he would often run contests in the classroom and gave out special tickets to reward performance. The kids would clamor to get those tickets because they increased their chances of winning a weekly drawing.

Here comes the clincher. The prizes the winners of the drawing got, were often (are you ready?) paper clips, rubber bands, or TWIST TIES! I'm not making this up! Apparently, the real prize is just being THE WINNER. What you go home with is rather moot.

So it shouldn't surprise you to read that there was no way I was going to leave that aircraft as a ninth place finisher. Oh no. Back to the game I went. Judging from the roster, it appeared that some new players had now replaced the old ones.

That might be to my advantage, I found myself saying (incredulously).

But after a few wrong answers I came to realize that the trivia champ amongst us was actually the woman seated right next to me. Effortlessly, she breezed through questions on fashion, cinema, and even topics like 19th century inventions and exotic fish. Demoralized, I helplessly watched her take a swift and insurmountable lead.

Now, I should be embarrassed to admit this, but I've already shamed myself anyway, so here goes. In last place and approaching the hopeless category, I found myself peeking to my left -- at the champion's answers -- in the hope of getting back in the game. I WAS CHEATING AT A TRIVIA GAME! Luckily she didn't detect my diverting eyes (or considered me too pathetic to bother with).

At game's end, I turned to the Trivia Maven and inquired about her wizardry of inconsequence.

"Well, I'm obsessed with crossword puzzles -- always have been. And that's what they are all about. No big deal, I guess."

No big deal. Of course, she was right. Trivia is ... well ... just trivial. And so, I spent the rest of the flight just thinking. And most of my thoughts centered on the dynamics of winning and how incredibly powerful and pervasive they are.

Winning. Let's be brutally honest. Isn't that what most of our arguments are really about?

Winning. Let's be brutally honest. Isn't that what most of our arguments are really about? With our spouses? Our kids? Our parents? Our bosses? Our friends and neighbors? The meter maids? Even our rabbis?

Our desperation to emerge victorious, even in situations of near-total insignificance, is painful testimony to the prominence of those voices of insecurity that lay dormant inside our fragile psyches. Those pockets of uncertainty can be found in all of us. Even our inane fanaticism with spectator sports is blamed on our insatiable obsession to, at the very least, associate ourselves with winners.

"I have basically been a loser all of my life. Successes of any kind have been few and far between. But if I just choose the right hockey team to root for, I can look myself in the mirror and say, 'You're okay after all."

Too much sense it does not make. And yet all of us adopt some form of this asinine behavior -- just to emerge triumphant, even for a fleeting moment or two.

I don't think I will ever forget the utter joy on my son's face, when his name was announced as the winner of a Mystery Package prize in a Chinese Auction a few years ago. Breathless and jubilant, he leapt up out of his seat like a souped-up Chevy Camaro at the starting gate at Daytona, and victoriously claimed his newfound treasure. Never mind that it was a Morph Lamp, a Lightning clock, and a tarnished silver plated mini tea urn probably procured from someone's trash can. That didn't matter. He was a winner and he was darn proud of it. And nobody could take that away from him.

And now for the question you have all been waiting to ask: What happened on the return flight? Did you return to the electrifying trivia game?

You know, it's a funny thing. For most of the way home, I resisted temptation; keeping busy with important things. But before we landed, I couldn't help grabbing a glint of the dumb game -- just to watch, of course. Well, wouldn't you know it ... the questions appeared on the screen, but not a single passenger on the entire plane was playing. It was as if everyone had come to the very same realization that I did. Who really cares?

I sat back and smiled to myself. A few seconds passed. The lonely game just continued on its own -- like an electronic monorail without any passengers. And suddenly, it struck me. If I just answer one question correctly before the game finishes, my name would appear as the winner!

I chuckled at my silly discovery and my pitiable consideration. I surveyed my fellow passengers with a final swift gaze. And then ... sadly ... I punched in an answer.

Immediately after, the game was over.

The Shrine of Mordechai and Esther

The Cheerio King
The Blue Beyond
Great Place to Live
Is Eating Supposed To Be Spiritual?
Comments
MOST POPULAR IN Current Issues
Our privacy policy