Mike Pence and Dining with Other Women 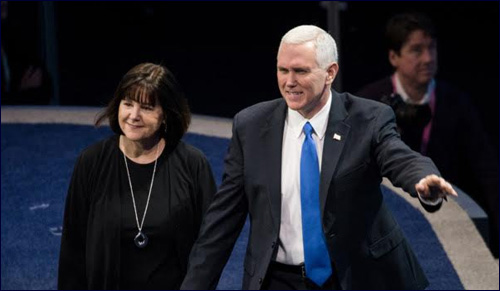 The VP won't eat alone with a woman other than his wife. Instead of condemning him, I think we should applaud him.

The blogosphere erupted with the news that Vice-President Mike Pence won’t eat alone with a woman other than his wife and won’t attend events where there is alcohol without her there. Some people think this reflects some antiquated sexism. I think it shows is a respect for and commitment to his marriage.

“You and the Vice-President have something in common,” I told my husband. “You have the same rule about not eating alone with another woman.” This is not because we share a “pretty radically retrograde mindset” that “doesn’t respect women as humans with thoughts and skills to contribute but rather sees them primarily as sexual temptations…” as a Slate article put it. It's because my husband has too much respect for me and our marriage to risk compromising it, even in the slightest.

It’s because from the Torah perspective (I can't presume to speak for the VP so I can only share our views), we want our marriage to be the best possible. We want to be like Adam and Eve in the Garden of Eden (as we say under the chuppa), like the only two people on earth who only have eyes for each other. In order to attempt to create this type of reality, we have to establish rules and guidelines. Like Mr. Pence, ours prevents my husband from dining alone with other women. I’m not sure what exactly is lost by this, and the gain seems obvious.

To those who argue that this suggests a negative disrespectful view of women, let me add that the same rule applies to me (and I’m assuming to Mrs. Pence as well). I would not go out for dinner alone with another man. Is it because it’s too tempting and men are only objects to me? No one would seriously make that claim. On the contrary; once again, it’s because my marriage is too important to risk even a small amount of damage, even a frisson of feeling or connection with someone else.

Our society has become very casual about relations between the sexes; it doesn’t always lead to inappropriate behavior but there is definitely a cost. Workplace romances, online affairs – and while there are no guarantees in life and the Talmud reminds us that we can’t be sure of ourselves until the day of our death, I certainly want to stack the odds in my favor.

When my husband teaches (non-religious) married men, he tries to warn them away from looking at other women. “The first look is instinctive; the second is a choice,” he tells them. And that choice can lead to problems, even if it’s just thinking about women other than your wife. Thoughts lead to action so we want to exercise control our thoughts as well.

The Mishna teaches us to build a fence around the Torah. When something is very precious to us, we go to extra lengths to protect it. Big mansions reside behind large walls or gates with extensive (and expensive) security. Fancy jewelry is kept in a safe. Presidents have the secret security.

In Jewish understanding, we build fences to protect our spiritual lives, not just our physical ones. And we certainly want to protect our marriages. Not dining alone with someone of the other gender to whom we are not married is just one of the many ways in which we tell the world (and ourselves!) that our marriage, our relationship is too important to be tampered with. We need to police our own actions and thoughts.

Instead of condemning Mike Pence, I think we should be applauding him.

Saying Goodbye to Our Big House

The Billionaire who Won't Leave his Kids a Penny

The Orlando Terror Attack
Why My Iranian Mother Didn’t Want Me to Become a Religious Fanatic
The Jewish History of Prague
Why the Sexual Revolution was Bad for Women
Comments
MOST POPULAR IN Current Issues
Our privacy policy
Aish.com Is Looking for Great Writers