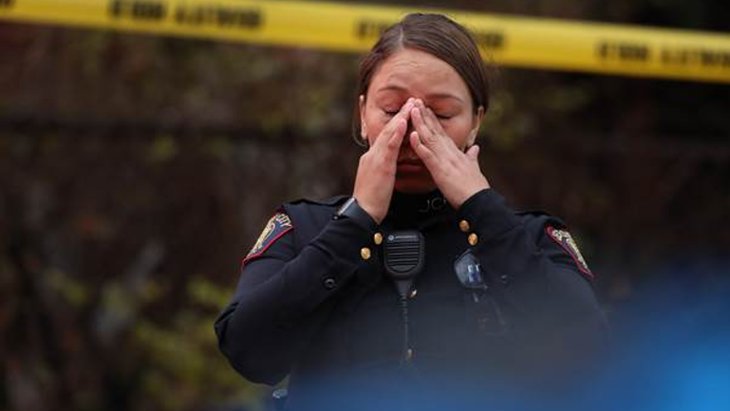 A little-known cult is behind the targeted attack of the kosher supermarket in New Jersey.

Two adherents of the Black Hebrew Israelites attacked a kosher grocery store in New Jersey, murdering three civilians and a detective, and wounding others.

“They mostly trade in anti-Semitism,” explains Heidi Beirish, director of the Southern Poverty Law Center (SPLC)’s Intelligence Project, which tracks extremist groups, of the Black Hebrew Israelite movement. “They call (Jews) sometimes devilish imposters or devils, because they think of themselves as the true Israelites.”

The extreme group has roots in the 1800s, when some fringe Black Pentecostal preachers in the South began asserting that far from present day Jews being the “real” descendants of the ancient Israelites, black Africans were, and it is the descendants of America’s former slaves who are the “real” Jews, The movement gave birth to many factions, some of which are peaceful. But some factions have become extremist and angry. “Although most Hebrew Israelites are neither explicitly racist nor anti-Semitic and do not advocate violence,” the SPLC noted, “there is a rising extremist sector within the Hebrew Israelite movement” that foments intense hatred of Jews and calls for the death of slavery of Jews and Whites.

In the past decade, hostile, anti-Semitic Black Hebrew Israelite branches have proliferated, with dozens of new Black Hebrew churches springing up, particularly in the Northeastern United States. Members confront and harass both Jews and Whites. Black Hebrews gained attention in January 2019 when four racist Black Hebrew members spewed racist bile at a group of students from Covington Catholic High School when they visited the National Mall in Washington DC on a school trip. One student’s face-off with a Native American drummer, who later said he was trying to heal over the hateful rhetoric, went viral.

More recently, groups of Hebrew Israelites from South London gathered to terrify and scream at Hassidic Jews on Shabbat in the North London neighborhood of Stamford Hill, which is home to the largest Hassidic population in Europe. Police were called to the scene on September 7, 2019, after a group of 20-30 Hebrew Israelites gathered and screamed insults at passing Jews.

The London group said they went by many names, not only Hebrew Israelites, perhaps contributing to confusion about just how big their hateful cult is and what they stand for.

On Tuesday, December 10, 2019, two Hebrew Israelite members in New Jersey took their hate much further, writing an anti-Semitic manifesto. Though police have not released this document, they described it as brief and “rambling”. It seemed to call for violence and death to Jews.

The two killers, whose names I won’t dignify by using here, a woman aged 50 and a man aged 47, were wanted for murder in connection the earlier killing of Jersey City resident MIchael Rumberger, who was killed by a blow to his head and was found dead in the trunk of his car in Bayonne, New Jersey, on December 8.

Two days later, a veteran Jersey City Detective, Joe Seals, spied the killers in a cemetery in Jersey City. Realizing that they matched the description of suspects in Mr. Rumberger’s murder, Det. Seals approached the pair, who shot him dead in cold blood. Det. Seals, a 40-year-old married father with five children, was left dead on the ground in the cemetery.

The murderers then entered a U-Haul truck that they’d stolen and seemingly outfitted for a major terror attack. Inside were a pipe bomb as well as a second explosive device. The truck also housed their hateful manifest. The pair drove the truck slowly and deliberately about a mile, to the JC Kosher Supermarket. Owned by Moshe and Mindel Ferencz, the store opened three years ago to cater to a small but growing Jewish Hassidic population that has been moving to Jersey City from nearby Brooklyn. The Ferenczs were among the first Hassidic families to move, and they were raising their three young children in their new community.

Moshe had just stepped out of the store to attend the brief afternoon Mincha service in a synagogue next door when the killers pulled up outside. They pulled out high powered rifles and started firing at the kosher market, then burst inside and continued shooting. Panicked synagogue members witnessed the scene and frantically dialed 911. Within moments, SWAT teams and other police officers from across New York and New Jersey were congregating at the scene. As police helicopters circled overhead, law enforcement officers came under intense fire from high profile rifles.

The firefight lasted for hours. One nearby resident, 67-year-old Willy McDonald told reporters, “This is one of the biggest gunfights I’ve seen in a while, and I’ve been in Vietnam.” Schools in the area were put on lockdown and police officers went door to door urging residents to stay inside for their safety. Bus and train service were suspended in the area and an exit of the New Jersey Turnpike was closed amid the firefight.

A shopper inside JC Kosher Supermarket managed to escape and described what it was like when the killers burst in: “I was standing by the salad bar in the grocery and I heard three shots, bullets shattered the glass of the grocery. Suddenly I saw two people come in, with long black raincoats and long guns. They tried to point the gun at me. I pushed it away and ran away.”

Inside the store, two Hassidic Jews and one employee were murdered by the killers. Mindel Ferencz, 33, died in her store, leaving her three young children without their mother. 49-year-old worker Miguel Douglas was also murdered. The third victim was Moshe Deutsch, a 24-year-old rabbinical student from nearby Brooklyn. Several others were injured, including at least one Hassidic passer by outside, and one Hassidic customer who seems to have been shot several times as they ran out of the store.

Shockingly, Jewish members of a group called Americans Against Anti-Semitism visited the scene of the shooting later that night, and found that non-Jewish neighbors who’d gathered were blaming the Jews for the violence that had just resulted in their deaths. “They would do that to us,” one local woman said of the Jewish victims, somehow inverting the situation to make it seem as if Jews were killers. “I blame the Jews,” another local complained. “If they was dead, they got shot dead, that’s great” one local man declared. Several neighbors expressed the hope that Jews would move away.

“I’ve cried my eyes out already,” said Victoria Ferencz, Mindel’s mother-in-law. “I’m feeling pretty broken… I feel sorry for my son. (Mindel’s) going to heaven, but he and his children will have it hard.” Mindel personified “a life of selflessness, and dedication to others,” said a local Jewish organization. She and her husband Moshe, among the first Hassidic families to move into Jersey City five years ago, decided to open their supermarket to help support their friends and neighbors so they could easily access kosher food in their new community.

Grocery employee Miguel Douglas was praised by his pastor who told local reporters that Mr. Douglas was an immigrant from Ecuador and lived with his wife and eleven-year-old daughter: “He was an excellent person, he really looked out for his family, and they were inseparable.”

The day after the attack, Rabbi David Niederman, the Executive Director and President of the United Jewish Organizations of Williamsburg in Brooklyn, praised the victims, including Mr. Deutsch, whom he described as an “extremely kind and generous” and a “go-to person when his peers needed help”. Mr. Deutsch recently helped lead a food drive during the Jewish holidays that helped feed 2,000 people.

In the midst of speaking to reporters, Rabbi Niederman began to cry, saying, “Can you imagine a few hundred bullets went into the body of a 24-year-old?” referring to Mr. Deutsch. “How can we as a people, a community, bear that?”

His question is one all of us must ask. With this horrific attack, a new front has opened in what increasingly feels like a war against America’s Jews. Last year the FBI reported that Jews, which make up fewer than 2% of Americans, accounted for 57% of victims of hate crimes in the USA. The Anti-Defamation League reported that violent attacks on American Jews doubled in 2018 from their already high levels in 2017. In fact, 2018, the most recent year for which records are available, saw the third highest levels of ant-Jewish hate and attacks since records began. With the attack in Jersey City, a new hate group has taken its place among the many that seek our destruction.

As we mourn our murdered brethren and pray for the recovery of the shoppers and passersby who were injured in the attack, let’s take a moment to appreciate the Jewish life that was so brutally attacked. In the memory of those who were killed and injured, let’s embrace the Jewish life they so loved, and commit ourselves to doing mitzvot in their memories.