I Was Raised for Jihad 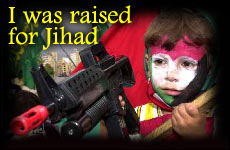 I grew up in Gaza, indoctrinated to hate Israel and the West. For peace to take hold, things have got to change.

Editor's Note: A key contributor to the failure of the Oslo peace plan was the ongoing indoctrination of Palestinian children to hatred -- in textbooks, television, mosques and summer camps. Now, with democratic progress in the Middle East, and the glimmer of hope toward a peace agreement in Israel, an important new initiative was launched this week -- Teach Kids Peace -- to ensure that Palestinian children are educated toward a culture of peace.

The following article, reprinted from TeachKidsPeace.com, is a first-hand account of education toward a culture of hate.

Terrorism coming out of the Muslim world did not happen by coincidence; it is the direct result of a culture that has been promoting hate, jihad and anti-Semitism for generations.

I grew up in Egypt controlled Gaza in the 1950's, at a time of President Nasser commitment to unify the Arab world and destroy Israel. He mobilized the Arabs in Gaza to start the 'Fedaeen' movement to make undercover cross-border attacks to terrorize Israel. My father who headed the Egyptian military in Gaza and the Sinai at the time, was killed as a result of these operations. He was hailed as a national hero, a 'Shahid,' meaning martyr. Nasser vowed that all of Egypt would take revenge and made no mention of the heavy toll of death and destruction brought upon Israel.

They taught us to solve disputes through violence.

In Gaza elementary schools I learned of hate, vengeance and retaliation. Peace was never an option and never mentioned as a virtue as long as Jews existed. The Glory of battle was the ultimate honor. They scared us from Jews and taught us to solve disputes through violence. I was told not to take any candy from strangers since it could be a Jew trying to poison me. Girls were in tears reciting jihadist poetry daily and pledging to give up their lives as martyrs.

After several generations brought up under this severe indoctrination, many Arab children were brainwashed like robots to value suicide bombers as someone to look up to in the hope of going to heaven. This unprecedented and extreme form of jihad produced the current generation of suicide bombers who kill non-Muslims with no mercy.

The indoctrination was not just in schools but also in songs, poetry, movies, cartoon and every facet of life. The divine mission of every generation was to take over the endless duty of jihad.

The goal of education was to instill a commitment to destroy the state of Israel; which became the Arab national obsession. Arabs convinced themselves that the existence of Israel gives them a carte blanche to do anything, and nothing was more sacred. The end result is a culture -- out of control, fueled by oil money, and contaminating the world with terror.

As a child, I was discouraged from questioning the teachings of hatred of Jews and other non-Muslims; to do that was an unforgivable sin. I quickly learned to keep my opinions and questions to myself. One has to hate the enemies of Islam to be a good Muslim.

The indoctrination of Muslim children into hatred of a common enemy was also used as a tool for compliance. Jihad needs hatred of an enemy, and hatred comes out of fear, thus fear of Jews had to be promoted constantly by incredible tales and lies. That was not hard since most Arab children never met or interacted with Jews. Isolating and boycotting Israel was thus vital in promoting hate.

Arab culture relies on fear of a common enemy to bring about unity and cohesion among its citizens to form in a united front. This is necessary in an oppressive culture that discounts individual rights, privacy and promotes death for God's approval. The unity of Muslims has to be maintained and nourished constantly at the expense of hate propaganda against Israel and the West.

Hate speech and violence is also taught in mosques. Muslim clergy have failed miserably in stabilizing their society. Instead of being a source of comfort and wisdom, they have become a source of hate, rage and subversion. They work the worshipers into a frenzy of anger and paranoia against the West and Israel.

I realized something was very wrong in the way my religion was taught and practiced.

I remember, as a young woman, visiting a Christian friend in Cairo during the Friday prayers, and we both heard the verbal attacks on Christians and Jews from the loudspeakers outside the mosque. We heard "May God destroy the infidels and the Jews, the enemies of God. We are not to befriend them or make treaties with them." We also heard worshipers responding "Amen." My friend looked scared, and I was ashamed. That was when I first realized that something was very wrong in the way my religion was taught and practiced.

The end result of this kind of educational system is a dysfunctional society that is exporting terrorism to the world. Arabs have to understand that they have created a failed system that has to be changed. This system is hurting Arab children and society from within more than they realize; it is simply a system that will not solve, but will create worse problems and unintended consequences. The teaching of hate in the hope of hurting the enemy is a form of child abuse against the healthy upbringing of Muslim children.

It is the duty of good Muslims to bring out and uplift the compassion, forgiveness and tolerance in Islam; not only verbally but also through their actions. Teaching Arab kids peace, tolerance and compassion is essential to bring about a better and more prosperous society and the only solution to Islamic terrorism. That is the only way to build trust, respect and peace between nations. 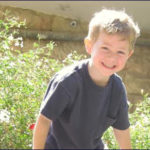 Praying After the Death of My Son4 min read

The Miracle Called Me5 min read

A Jewish Perspective on the Feminine1 min read

Nike and the Purpose of Life7 min read