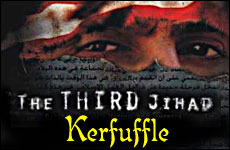 A second look at the controversial documentary.

Did the New York City Police Department use "terrible judgment," as Mayor Michael Bloomberg said, when it showed a documentary about Islamist extremists -- The Third Jihad -- to more than 1,400 officers undergoing counterterrorism training?

You might think so if you took your cues from a New York Times editorial calling the documentary a "hate-filled film about Muslims," or from the Council on American-Islamic Relations (CAIR), which declared that it "defiled our faith and misrepresented everything we stood for."

Jasser is a former US Navy officer and a past president of the Arizona Medical Association. He is also an observant Muslim, a Wisconsin-reared son of Syrian immigrants deeply grateful for the freedom and tolerance his parents found in America. Ever since 9/11, he has been fighting the Islamist extremists whose goal is to destroy that freedom and tolerance.

"As a devout Muslim I saw it as my responsibility to expose the radicals," Jasser says in The Third Jihad, which he narrated. "I resented that they were exploiting the religion I love."

After al-Qaeda's murder of 3,000 Americans, Jasser recalls in the film, "I had expected to see Muslims in America taking to the streets and protesting against [Osama] bin Laden. Instead, in the years that followed, we saw many Muslim leaders standing up to defend or support the radicals." So he launched the American Islamic Forum for Democracy to defend American values, promote the separation of mosque and state, and expose the Islamist agenda behind certain influential Muslim organizations.

The best-known of those organizations, CAIR, describes itself as a civil-rights group. In reality it is anything but. Its founders were linked to the terror group Hamas and several of its officials have been convicted or deported on terrorism-related charges. In the Holy Land Foundation terror-funding trial, as former Homeland Security Secretary Tom Ridge and former CIA Director Jim Woolsey recounted recently, CAIR was designated by the Justice Department as an unindicted co-conspirator. The Third Jihad shows news footage of CAIR's national legislative director refusing a reporter's request to condemn Hamas and Hezbollah. That is par for the course -- CAIR wouldn't even condemn bin Laden until more than two months after 9/11 -- and helps explain why the FBI severed its ties to CAIR.

Far from being an indiscriminate attack on Islam or Muslims, The Third Jihad consistently distinguishes between Islam's peaceful, moderate mainstream and the totalitarian jihadists who seek a global Islamic theocracy. The documentary's opening lines are unambiguous: "This is not a film about Islam. It is about the threat of radical Islam. Only a small percentage of the world's 1.3 billion Muslims are radical."

But where those radicals hold sway, liberty and pluralism are endangered. "Have you ever stopped to think about what would happen if the Islamists won and their version of Sharia law was put into place?" Jasser asks. The 72-minute film depicts the chilling consequences: Subjugation of religious minorities. Abuse of women. "Honor" killings. Anti-gay brutality. Stifling of free speech. Support for terrorism.

Bin Laden may be dead and Khalid Sheikh Mohammed behind bars, but a key message of the film is that jihadists pursue their goal of a West dominated by radical Islam with undiminished fervor. "On my website we talk about the Islamic state of North America by 2050," says Imam Abdul Musa, a prominent Islamist interviewed for The Third Jihad.

Radical groups like CAIR use the calumny of anti-Muslim bigotry to defame those who warn of Islamist militancy. Fear of being smeared has intimidated too many politicians and journalists, which is why the Zuhdi Jassers of the world -- devoted Muslims who are pro-American, pro-democracy, and anti-Islamist -- are inestimable allies in the war against the jihadists.

Happily, he is not fighting alone. During the recent furor over the film, New York City Councilman Robert Jackson, a Muslim, refused to toe the CAIR line. "I initially thought from reading about it that it cast a negative image on all Muslims," he said. "In my opinion it does not. It focuses on the extreme Muslims that are trying to hurt other people." Similarly, the American Islamic Leadership Coalition issued a strong statement defending The Third Jihad as "factually accurate and important."

You needn't take their word for it. Watch the film for yourself at TheThirdJihad.com, and gain crucial insight into one of the central struggles of our time: the war of ideas within Islam.

The Burning of Woodstock