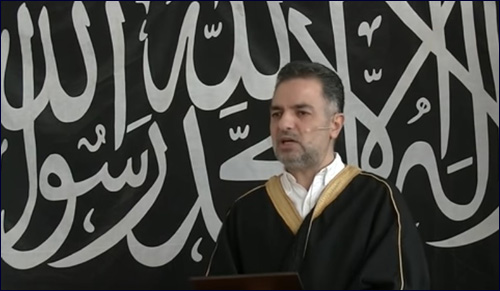 Muslim organizations and imams are not condemning the imam who preached murdering Jews.

In 2015, Omar El-Hussein listened to the imam Hajj Saeed, at the Hizb-ut-Tahrir- linked Al-Faruq-mosque in Copenhagen, decry interfaith dialogue as a "malignant" idea and explain that the right way, according to Mohammed, is to wage war on the Jews. The next day, El-Hussein went out and murdered Dan Uzan, the volunteer Jewish guard of the Jewish community, as he was standing in front of the Copenhagen synagogue. El-Hussein had also just murdered Finn Nørgaard, a film director, outside a meeting about freedom of speech.

Two years later, nothing has changed. A visiting imam from Lebanon at the Al-Faruq mosque, Mundhir Abdallah, is preaching to murder Jews:

"[Soon there will be] a Caliphate, which will instate the shari'a of Allah and revive the Sunna of His Prophet, which will wage Jihad for the sake of Allah, which will unite the Islamic nation after it disintegrated, and which will liberate the Al-Aqsa Mosque from the filth of the Zionists, so that the words of the Prophet Muhammad will be fulfilled: 'Judgement Day will not come until the Muslims fight the Jews and kill them. The Jews will hide behind the rocks and the trees, but the rocks and the trees will say: 'Oh Muslim, oh servant of Allah, there is a Jew behind me, come and kill him.' ..."

The "words of the Prophet" are from a well-known hadith, number 6985.

Far from hiding this incitement, the mosque posted the sermon, delivered on March 31, on the YouTube page of Al-Faruq Mosque on May 7. The invaluable research organization, MEMRI, translated it.

A reporter from Danish TV channel TV2 news, who recently spent two hours around the Al-Faruq mosque, could not find a single Muslim willing to condemn the imam. "I don't think he meant anything bad by it," said Bayan Hasan, a female student. Another Danish Muslim, Mohammed Hussein, incorrectly replied, "According to Islam, Muslims are not allowed to kill". The Quran verse 8:12, to mention one of many examples, says otherwise: "...I will cast terror into the hearts of those who disbelieved, so strike [them] upon the necks and strike from them every fingertip."

Denmark's Minister of Integration, Inger Støjberg, called on the mosque and all Muslims in Denmark to condemn the sermon. "If this had happened in a Danish church, it would not have been necessary to ask people to condemn it. It would have been automatic", she said.

Muslim organizations and imams have, in fact, been completely quiet on the matter. One leading imam, Naveed Baig, from the Danish Islamic Center, simply dismissed the sermon: "Islam as a religion cannot be anti-Semitic, as Islam itself is a Semitic religion", he said.

The Quran and the hadiths are in fact brimming with anti-Semitism, not to mention exhortations to kill Jews and other "infidels", and calls for jihad (war in the cause of Islam) -- a fact of which Naveed Baig is doubtless well aware.

According to the Quran, people who refuse to acknowledge Allah as the one true god are unbelievers destined for hell: "Verily Allah has cursed the unbelievers and prepared for them a blazing fire" (Quran 33:64). Muslims therefore are superior to all others:

"Ye are the best of peoples, evolved for mankind... believing in Allah... If only the People of the Book had faith, it were best for them: among them are some who have faith, but most of them are perverted transgressors." (Quran 3:110).

"Soon shall we cast terror into the hearts of the unbelievers... their abode will be the fire: And evil is the home of the wrong-doers." (Quran 3:151).

As for specific passages about the Jews, the Quranic passages 5:60 and 7:166 talk of the Jews being cursed and transformed by Allah into apes and pigs: "...those who incurred the curse of Allah and his wrath, those of whom some he transformed into apes and swine, those who worshipped evil..." This is the reason Jews today in large parts of the Muslim world are commonly called apes and pigs. Furthermore, "Jews and pagans [are] among the worst of the enemies of the believers". (Quran 5:82).

The Jews are described as hypocrites (Quran 2:14), and "slayers of His [Allah's] messengers" (Quran 2:61), who are "cunning" and "hate to see your success and rejoice if any misfortune befalls you" (Quran 3:120). These examples constitute only a part of the innumerable examples in the Quran and the hadiths, not to mention the writings of Islamic scholars.

Therefore, there is nothing unusual about imams calling for the murder of Jews in certain mosques, even in the West. In Canada, for example, in 2016, at Montreal's Dar Al-Arqam Mosque, an imam recited the same hadith about stones and trees asking Muslims to come and kill Jews hiding behind them.

In Denmark, however, among politicians, news of the sermon generated the usual "shock". Minister of Justice Søren Pape said it is "insane" that people such as the imam "exist in Denmark": "It is deeply unsympathetic," he said. "These are medieval thoughts and it makes me very sad that in Denmark in 2017 there are still people who really have not evolved further."

Other Danish politicians reacted with similar degrees of "shock" -- appearing utterly surprised by basic tenets of Islam, which have only been public for 1400 years.

Søren Pape hopes to solve the issue by prosecuting the imam. In December 2016, Denmark introduced a new provision in the penal code aimed at religious preachers. It is known in Denmark as the "imam provision," as it is, in practice, mainly aimed at imams. According to the provision, speaking approvingly of terror, murder, rape, violence, incest, pedophilia, coercion and polygamy, whether at private or public events, is prohibited and punishable by fine or prison of up to three years. The "imam provision" exists in addition to the general provision in the penal code, according to which it is prohibited and punishable by fine or prison publicly to threaten, insult or demean a group of persons because of their race, skin color, national or ethnic origin, faith or sexual orientation.

Danish politicians appear to miss the critical fact that there is clearly a thirsty audience for sermons like this.

However, even if a Danish court should succeed in convicting the imam, Danish politicians appear to miss the critical fact that there is clearly a thirsty audience for sermons like this.

The Danish Jewish Community reported the imam to the police. Jewish community leader Dan Rosenberg told the newspaper Politiken: "We are concerned that weak and impressionable people may perceive this kind of preaching as a clear call to violence and terror against Jews." This sermon, however, is not a question of "perception": This sermon is a call to violence against Jews.

Danish Jews also have more reasons to feel threatened. In October 2015, a Danish girl, then 15, converted to Islam and immediately planned to bomb the Jewish school in Denmark (in addition to a plan to bomb her own school). Her mother, who was concerned about the girl's new behavior, desperately sought to alert the Danish authorities. The Danish police intelligence service (PET), told the mother not to worry, and assured her that her daughter would not "do anything", despite being told that her daughter was "desperate" to wage jihad. According to the mother:

"The only advice I got was to do with the food. They thought that if [my daughter] refused to eat pork and I insisted on making it for dinner, then I would have to make two separate dinners."

A few months after her daughter's conversion, in January 2016, the mother found a stash of chemicals in her basement and a note where her daughter had written the name of the Jewish school and its opening hours, and the words "jihad" and "Allah is great". The girl also apparently looked up to Omar El-Hussein, the terrorist who killed Dan Uzan and Finn Nørgaard, and even took his name as her own. After finding the chemicals, the mother reported the girl to the police. The girl is considered so dangerous that she spent part of her detainment in solitary confinement. Her trial recently ended; sentencing is expected mid-May.

As the Quran cannot be changed, it is crucial to make more broadly known what is in it, so at least people can see the facts confronting them, to help them determine what choices they might care to make for their own future and that of their children.

This article originally appeared on https://www.gatestoneinstitute.org/

Judith Bergman is a writer, columnist, lawyer and political analyst.