Nothing is Rotten in the State of Denmark 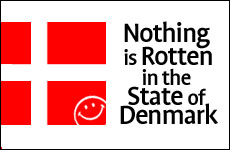 Why is Denmark the happiest place in the world?

Happiness. The most prized commodity of all. Some people think they will find it in marriage, some look in exotic locales halfway across the globe, while others think it is found in the driver's seat of a Maserati. Where can happiness be found?

Research seems to indicate that it can be found in Denmark.

As in previous years, Denmark emerged as the happiest country in the world. Adrian White, a psychologist at the University of Leicester's School of Psychology, publishes a "world map of happiness," using data from 80,000 questionnaires filled out world-wide, as well as information culled from a bevy of governmental reports and private foundation's databases. Somehow, Denmark, a country whose most notable invention is the herring sandwich, repeatedly makes it to the top of the list. (The US came in 23rd, Germany 35th, the UK 42nd, Israel 58th, France 62nd, and Russia 167th!)

What is the secret of that small country with dreary weather, heavy smoking and drinking, and taxes between 50-70%, that keeps the Danes so happy?

The key to the Danes' happiness is that they don't have high expectations.

A recent episode of 60 Minutes tried to find the answer. Morley Safer spoke to Professor Kaare Christensen at the University of Southern Denmark, who published a study titled, "Why Danes Are Smug." He discovered that the key to the Danes' happiness is that they don't have high expectations. To illustrate, he claims that if the Danes ranking would drop to 20th instead of first, their response would be, "That's not bad; at least we're in the Top 25!" By having low expectations, explains Prof. Christensen, one is rarely disappointed.

The government helps this low-expectation lifestyle by taxing people highly while providing an enormous amount of social services. Health-care is free, people are paid to do well in college, and even graduate school is free. After having a child, both parents get paid leave for at least half a year, and Denmark spends more per capita on child and elder care than any country in the world. The government even helps subsidize friendships by providing funding for any group of people who want to cultivate a hobby like model airplane building or quilt croqueting. About 92% of Danes belong to at least one of these social clubs.

With high taxes limiting the earning power of the wealthy and phenomenal social services keeping people out of debt, there is very little wealth disparity in Denmark. Since the after-tax income of a banker and a carpenter are not far apart, people choose professions based on preference, not expectations of higher salary. There is very little drive to live up to the Joneses, as the Joneses are Jante-luv, just like you.

Tal Ben-Shahar, a veteran of the IDF, was the most popular lecturer at Harvard University. Last year over 1,400 students took his class in Positive Psychology -- the Science of Happiness. He explains that the US has a very different dynamic than the one displayed in the Danish culture. "In America, part of the ethos, part of the American dream, is that more is better, and the more is better usually applies to the material realm. And that doesn't pan out.... It doesn't make us happier."

About 94% of college students in the US report that they already feel "stressed and overwhelmed," the result of high expectations. Wanting it all is a disease that stays with us from youth to old age -- wanting a bigger house, fancier car, more stuff. But, as the Sages of the Talmud taught regarding the physical realm, "He who has 100 wants 200, he who has 200 want 400." The more you have, the more you want. This begins a vicious cycle of expectation, desires, and mounting needs.

One of the most striking results of the "American Dream" was discovered by Israeli economist and Nobel Prize winner, Daniel Kahneman. He found that, generally speaking, American women did not enjoy spending time with their children. The problem wasn't that they didn't love their children. It was simply that while spending time with their children, they were so busy doing other things such as checking email, paying bills, or shopping, that the time together became irritating and tedious to them. Playing your two favorite songs at the same time would be grating, even though when played individually they give you great pleasure. In the rush to accomplish many tasks at once, mothers are losing their ability to properly do any!

73% of American teens said that what makes them most happy is a good relationship with their parents.

Two sources of happiness that are often overlooked are family and religion. In a poll of 1,280 American teens conducted by the Associated Press and MTV, 73% said that what makes them most happy is a good relationship with their parents. Over half said that religion and spirituality is very important to them, and that the knowledge that there is a Higher Power that watches over them and controls their world makes them feel happy and secure. Interestingly, almost no one said that money makes them happy.

All this research into the science of happiness has resulted in some suggestions for boosting happiness, and not surprisingly, you can find roots for these ideas in Torah teachings, the instruction manual for living the most happy and fulfilling life.

Let's run through some of the suggestions:

• Keep your expectations low. Simplify; don't try to achieve too much at one time. The Talmud frequently tells us "tafasta meruba lo tafasta, tafasta mu'at tafasta." If we try to grab too much we end up with nothing, but if we try to accomplish a little, we will surely achieve it. To help us with this we have a special day called Shabbat -- 25 hours to stop trying to grab, and instead focus on the most meaningful things in our lives: our family and friends, our spirituality, and ourselves.

• Exercise. The Torah told us 3,300 years ago that we must watch our health carefully, and recent studies confirm that it can actually increase your happiness. Exercising three times a week for 30 minutes has the same effect as some of the most powerful psychiatric drugs being prescribed today.

•  Keep a gratitude diary. Every day Prof. Tal Ben-Shahar writes down five things in his diary. Some of them are big things like his happy marriage or his successful career, while others are small, such as a really good ice cream sundae or the ability to cheer up a co-worker. As Jews, we stop three times a day to thank God for the goodness in our lives, and gratitude is the focus of one of the most important blessings in every Amidah. However, a diary is a great way to add to our gratitude bank. The Jews are called Yehudim, (the word from which Jew evolved), because that word connoted thankfulness, which is one of the most fundamental traits of the Jewish people.

The Sages tell us that the current Jewish month of Adar is the happiest month in the calendar, a time for increasing our joy. And a perfect time to try out some of these tips. 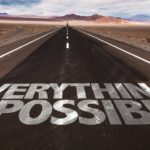 PODCAST: Rebbetzin Heller on Breaking Free from What’s Holding You Back1 min read

Cut to the Chase: The 70% Solution1 min read 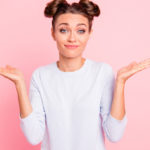 That's Just How I Am4 min read