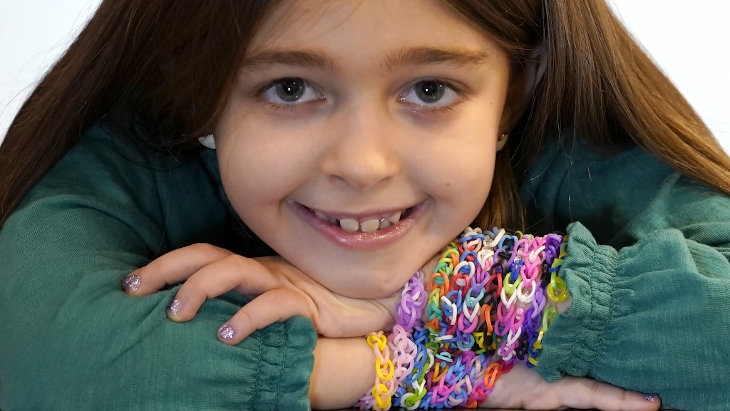 Lori Orlinsky speaks to Aish.com about her daughter Hayley and encouraging empathy in kids.

During the past several months, in a world buffeted by illness and the dire economic effects of the pandemic, many of us have grappled with how to help our children respond. For Lori Orlinsky, a Jewish mother of two living in Chicago, the current crisis has been an opportunity to help empower her kids – particularly her older 7-year-old daughter Hayley, to help.

“One day we were all in the living room,watching TV,” Lori described in an Aish.com interview. “Hayley felt really bad hearing how the doctors and nurses didn’t have enough equipment.” Hayley had recently learned how to make friendship bracelets out of small plastic loops. She’d also just finished selling cookies for Girl Scouts and realized that she could sell items to make money. Hayley told her parents she wanted to make friendship bracelets and sell them, and use the money to buy protective gear for nurses and other medical supplies. 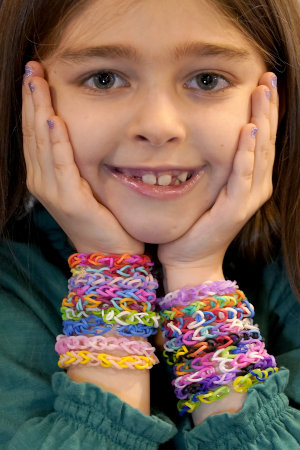 Lori and her husband Brian pointed out to their young daughter that in the middle of a global pandemic selling bracelets and getting them to customers would be difficult. Hayley was adamant. When she was born, Hayley had to spend a few days in the neonatal intensive care unit at Lurie Children’s Hospital in Chicago and now she wanted to give back to the doctors and nurses there who’d helped her.

Hayley’s grandparents told her they’d match any funds she raised, and would donate to Lurie Children’s Hospital too. Hayley said she thought she’d make about $200, and they were prepared to donate the same amount.

Soon, both sets of Hayley’s grandparents had to cap their matching offers at $1,500. Orders for Hayley’s friendship bracelets started pouring in and word about her fundraising project spread. Chicago Mayor Lori Lightfoot bought several bracelets and shared Hayley’s story on social media. Orders poured in from as far away as Italy and Hawaii. Hayley worked tirelessly to keep up with the orders, enlisting her younger sister Ellie, now five, as a helper. 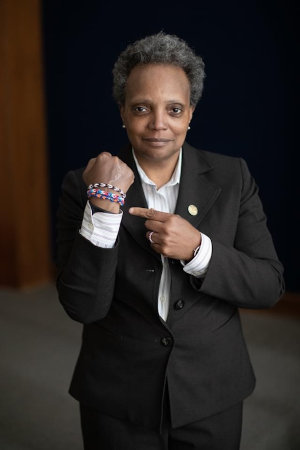 Mayor Lightfoot with her friendship bracelet.

“I guess I did something right,” Hayley’s mom Lori notes with a laugh. While Lori explains that Hayley’s generosity and can-do spirit are a product of Hayley’s own wonderful personality, Lori herself, along with Brian, have created a warm, Jewish home that’s allowing their girls to thrive.

Lori grew up in Columbus, Ohio, in a home that was always acutely aware of the horrors of the Holocaust. Her beloved grandparents, Dina and Abram Geller, were Holocaust survivors who moved to America after World War II. “No matter what we faced growing up, we always knew that my grandparents were very resilient,” Lori explains, and had lived through far worse. Her grandmother Dina lost all her family in the Holocaust, yet instead of succumbing to despair, Lori remembers that she was always incredibly grateful for what she had.

“My grandparents are such a big part of how I raise my kids. I explain how they wouldn’t be here if it wasn’t for them.” She also tries to model her grandparents’ qualities of kindness, tolerance and resilience in her own home.

Lori has also demonstrated to her girls what resilience can look like. When Hayley was very young, she was the shortest kid in her class and was bullied because of her height. Lori searched to buy Hayley a children’s book about being bullied but couldn’t find what she was looking for. So Lori decided to write her own book about bullying.

Being Small (Isn’t So Bad After All) was published in 2019 and won a Mom’s Choice Award and sold out its initial run in two days. “Bullying is terrible,” Lori says. “The rhyme ‘sticks and stones may break my bones but names can never hurt me’ couldn't be further from the truth. Those names you hear last the rest of your life. The book shows how the attributes that make us different are what make us special.”

Lori believes Hayley’s empathy comes, in part, from her experience being bullied.

When the Orlinsky family started ordering in groceries and other supplies in the early days of the pandemic, Hayley noticed that while her family was able to shelter in place, the delivery people who came to their door didn’t have that luxury. “Mommy, why are people out there risking their lives?” she asked. Hayley took an empty delivery box, filled it with bracelets, and put it outside with a sign saying “Thank you. Please take one.” 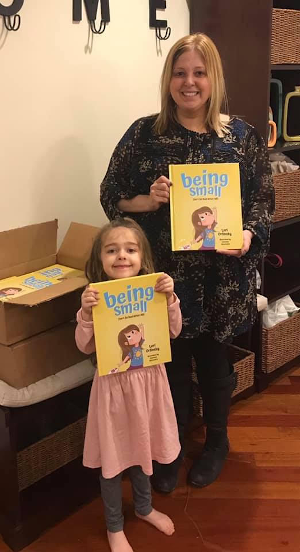 Hayley and her mom Lori

Last summer, Hayley attended a Jewish day camp, which embraced her bracelet making project. By then she was fielding huge numbers of orders, and having lots of other little girls volunteering to help make them helped keep the project going. “She was coming home with 400 bracelets a day,” Lori recalls.

Hayley has sold about 9,000 friendship bracelets and raised over $22,000 for Lurie Children’s Hospital of Chicago’s Covid relief fund. The orders keep coming. “She recently received an an order for 500 bracelets!” Lori says. Hayley plans to continue making and selling bracelets until the pandemic is over.

For parents who’d like to encourage their kids to be altruistic and take action, Lori has some key advice. “Talk to your kids often about their qualities that make them special, and use that as a tool to show your kids that everyone’s different, and if we were all the same the world would be a boring place… Always put yourself in someone else’s shoes before you think, do or act.”

Why I Want a Large Family

Creating Security for Children in a Scary World

3 Ways to Help Your Child Deal with a Stressful Situation

The Mommy Chronicles: One Small Red Lego
Who Was Josephus? The Controversial Backstory of the Famed Historian
Should I Break Up, Get Engaged or Keep Dating?
Time Is Your Precious Commodity
Comments
MOST POPULAR IN Family
Our privacy policy