Not by Bread Alone: Ethics of the Fathers, 3:4 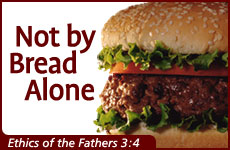 In our previous mishna, Rabbi Chanina ben Tradyon taught that two who sit together without exchanging words of Torah are considered a company of scorners. Our mishna seems to add little. Why does Rabbi Shimon think we require a second mishna just to amplify what we have already learned by raising the number of people involved, intensifying the degree of culpability, and include the additional factor of eating at the same table?

Just because something is a cliche doesn't mean it's not true, and the truth remains that some people eat to live, others live to eat. Indeed, human beings are the only creatures that eat for pleasure, not solely for nutrition and sustenance. Indeed, it is truly extraordinary how much time, money, energy, and planning humans put into the preparation and consumption of food, often to the detriment of their own good health.

Just as animals know instinctively that they need food to survive, human beings should appreciate that eating is not an end in itself, but merely a means to a higher purpose. Thus did Moses admonish the Jewish people when he said, "Man does not live by bread alone, but by all that comes forth from the mouth of God" (Deuteronomy 8:3). Just as the body requires physical nutrition to preserve its health and maintain its function, so too does the soul require spiritual nutrition for its own well being.

The most straightforward means of elevating the table to the level of the altar is by interspersing words of Torah throughout the meal.

The sages teach us the profound significance of eating when they compare the dining table to the altar in the Temple sanctuary: when we sit down to a meal, we should each consider ourselves as the Kohen (priest) in the Temple, serving before the Almighty and seeking to elevate ourselves through the intrinsic holiness of his service. Even the physical act of eating, when engaged in with the intention of fueling the body as preparation for the pursuit of spiritual goals, becomes an act of holiness. And the most straightforward means of elevating the table to the level of the altar is by interspersing words of Torah throughout the meal.

Conversely, when we feed the body with no thought for the sustenance of the soul, we not only fail to elevate the table, but liken our repast to the service of idols. Indeed, idol worship is essentially the distancing of oneself from his Creator by constructing impediments to spiritual growth. By indulging in the sustenance of the body without an awareness of the spiritual purpose that the body serves, we allow our animal nature -- which should be channeled and made to serve our godly nature -- to define our essence and subjugate our potential to pursue a higher purpose.

Without words of Torah to provide a context that harnesses and directs our baser impulses, we embrace our animal nature and sink to a level that deadens our spiritual sensitivity. Rather than transforming the table into and altar before God, our meal becomes little better than an "offering to the dead."

Rabbi Shimon bar Yochai, the author of our mishna, is best known as the author of the Zohar, the classic book of kabbalah. The Talmud recounts how Rabbi Shimon, together with his son, fled from the Romans into the wilderness. When the father and son took refuge in a cave, a carob tree miraculously sprouted forth to conceal the entrance and a spring of water bubbled up from the dry ground.

For 12 years Rabbi Shimon and his son subsisted on carobs and water, devoting every waking moment to the study of Torah until they had uncovered the deepest secrets of Jewish mysticism. Upon emerging, they were aghast to discover their fellow Jews engaged not in the study of Torah, but in such mundane pursuits as plowing their fields and harvesting their crops.

Eventually, however, Rabbi Shimon and his son came to realize that not every Jew can attain the lofty spiritual level where carobs and water suffice to sustain them. The average Jew does not function on the extremes of spiritual existence, but strives to achieve a modest equilibrium, engaging the physical world and thereby elevating the material to a level of spirituality.

Consequently, our mishna records Rabbi Shimon's insight into the pursuit of spiritual balance: when three or more sit down together to break bread as a formal meal -- in contradistinction to the spontaneous shared table of two incidental companions -- it is incumbent upon them to elevate the ritual of dining beyond physical indulgence to a level of spiritual objective by exchanging words of Torah. Ultimately, it is neither self-deprivation nor monasticism that defines the divine service of the Jew, but rather how he uses the resources of the material world to propel himself toward divine intimacy with his Creator.

Will We Remember Leiby in a Month?

How I Knew I Wasn't a Loser

Who Are the People who Changed Your Life?