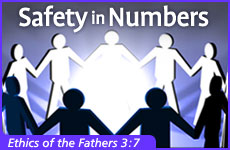 More than misery loves company, sanctity thrives among the many.

Upon a grassy hill overlooking the northern Israeli town of Tiberias, you can find the burial place of Rabbi Akiva, a son of converts who became the most influential Torah leader in the history of the Jewish people, with the single exception of Moses. Carved into the stone tablets at the entrance of his grave, you can read the following story, excerpted from the Talmud:

After the destruction of the Second Temple and the devastation of Jerusalem, the Romans continued to increase their oppression of the Jewish people, turning their armies from the job of defeating Jewish military resistance to the task of crushing every vestige of Jewish nationalism. Recognizing the Torah as the source of the Jews' indomitable spirit, the Romans issued an edict outlawing any study of Torah, the violation of which was punishable by death.

But Rabbi Akiva disregarded the ban. Not only did he continue to study Torah, he continued to teach Torah publicly, flouting the edict as if the Romans had no authority over him or his fellow Jews.

Pappas ben Yehudah, a childhood friend of Rabbi Akiva, had responded to the Roman occupation somewhat differently. Seeking protection by currying favor with his Roman overlords, Pappas had adopted Roman fashion and appearance, hoping to convince his new masters that he was their loyal subject.

Upon discovering Rabbi Akiva's seeming disregard for the danger presented by Rome, Pappas could not contain his horror. "Akiva!" he cried. "This is madness. Do you think the Romans won't notice you transgressing their laws right before their eyes? Do you think they will show you more mercy than they have shown the millions already massacred?"

Rather than answering his friend's argument directly, Rabbi Akiva replied with the following parable:

A fox was once walking along the bank of a river, when he noticed a school of fish darting to and fro in the water. "Why do you race back and forth?" the fox asked the fish.

"We are fleeing the nets of the fisherman," the fish answered the fox.

"Well, if it is the fisherman you fear," replied the fox, "come up here on dry land, and we can live together in peace as our ancestors did."

"Are you fox, whom they call the wisest of all animals?" the fish cried. "If we are in danger here in the water, which is our natural environment, what hope would we have of finding safety by abandoning the conditions that enable us to survive?"

Torah is our natural environment. It is the air that we breathe and the water that we drink.

True to Pappas's prediction, the Romans did not overlook Rabbi Akiva's public disregard for their decree. He was arrested and thrown into prison. But as he awaited his execution, another prisoner was brought in -- his old friend, Pappas ben Yehudah, whose efforts to shed his Jewish persona and transform himself into a Roman citizen had profited him nothing. Rather than remaining true to himself, he had sold out his own people and his own heritage, and he had ended up with nothing.

Pappas regarded Rabbi Akiva from his cell and lamented, "Fortunate are you, Rabbi Akiva. I have neither this world nor the next world. You have both this world and the World to Come."

TORAH FOR THE MASSES

The author of our mishna, Rabbi Chalafta, echoes Rabbi Akiva's message and takes it one step further. True, Torah study is the lifeblood of every Jew. But the intrinsic holiness of Torah and its spiritual benefit increases geometrically with the number of people involved in it together.

Indeed, why did Rabbi Akiva himself not study Torah in secret? Why did he not meet with his students hidden away in a secluded attic or basement? Even given the importance of learning Torah, why did he place himself so conspicuously that the Romans could not help but notice and arrest him?

As leader of his generation, Rabbi Akiva could not be satisfied to merely teach. To instill values in a people, especially in a time of such profound disillusionment and despair as the period immediately following the razing of the Temple and Jerusalem, Rabbi Akiva had to provide a living example of Torah commitment.

What if the Romans had outlawed breathing? What if they had proscribed, eating and drinking, sleeping, hugging one's children, or intimacy between man and wife? Would even the Pappas ben Yehudahs among the Jewish people have submitted to such decrees?

Rabbi Akiva placed himself in jeopardy to show his people that Torah is no less fundamental to Jewish life than air and water, and to impress upon them that Torah survives not when it is observed by solitary individuals but when it remains vibrant in the midst of the community. The public observance and study of Torah is qualitatively far more valuable and significant that the private study of Torah. Despite Rabbi Akiva's execution, his Torah survived and was transmitted through his students to every generation until today.

However, lest an individual who lacks the opportunity to learn with others should think that his own solitary learning lacks value, Rabbi Chalafta concludes with the verse, In every place where My Name is mentioned I will come to you and bless you. Whether in a public assembly of thousands or in the privacy of one's room, Torah sustains us by keeping us connected with God, with our fellow Jews, and with the true essence of our spiritual selves.

4 Insights on How to Manage Stress

Breakfast with Tzvi: Black Sabbath
The Japanese Everything Bagel Spice Recipe
How To Stock A Jewish Pantry Wherever You Live
Blessing on Chewing Gum
Comments
MOST POPULAR IN Spirituality
Our privacy policy