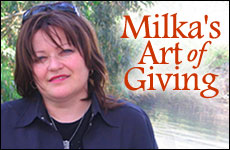 She finds the strength to feed Israel's poor by feeding her own soul.

Milka's life is full of people: downtrodden, despairing, impoverished people. As coordinator of Yad Eliezer, Israel's largest provider of food to the poor, Milka's days are a parade of one heartbreaking case after another. Women come to her desk at Yad Eliezer's Jerusalem office pleading for money to pay their electric bill; they mention in passing that it took them an hour to walk here because they have no money for bus fare. Milka's phone never stops ringing -- with requests for shoes, or for dental care for a child with a toothache, or for baby formula for a mother too malnourished to nurse, or for orphaned children to be added to Yad Eliezer's Big Brother program. Her life is more crowded with destitute characters than a Dickens novel.

Her life is more crowded with destitute characters than a Dickens novel.

Milka's paintings, by contrast, are devoid of people. They depict sparse interiors: windows, looking in on her art studio; doors and portals of all kinds; various arrangements of two chairs. One series depicts shadows -- of a teapot, of a tree.

Milka's life is turbulent. Her job at Yad Eliezer sends her into the tornado-wracked homes of families who have lost a parent -- through death or abandonment -- or who are facing traumas of chronic illness or the upheavals of sudden tragedy. The rainy day Milka's show opened found her in an outlying neighborhood of Jerusalem visiting a family of seven children whose mother had just died of cancer. The father, overwhelmed, had despaired of coping. Milka noticed piles of wet laundry lying in corners. The family did not own a dryer. On rainy days they would normally hang the laundry on clotheslines strung across the living room, but that option was not appropriate while the family was sitting shiva. Milka had recently received a contribution from an American donor for "washing machines and dryers." She couldn't replace their mother, but Milka did buy them a dryer, registered the family to receive Yad Eliezer's monthly carton of food, and also signed up the five sons for Yad Eliezer's Big Brother program.

From there, Milka goes to a town near Jerusalem to check on a family whose neighbor has called Yad Eliezer. She arrives at dusk, knocks on the door, and finds eight forlorn children. She asks for their mother and is told that Mother works cleaning houses in Jerusalem; she'll be back later. Milka asks for their father, and the children hang their heads silently; she finds out later that their father is in a mental hospital.

The apartment is getting dark, so Milka asks them to turn on a light. "We can't," one of the children replies. "They turned off the electricity."

Another child adds: "The downstairs neighbor had mercy on us, so they put an extension cord from their apartment to ours for the refrigerator."

In the dim illumination, Milka can see that the children's faces are spotted with white blotches, a tell-tale sign of malnutrition. Trying to sound upbeat, Milka suggests, "Let's surprise your mother and prepare dinner." The oldest daughter gazes down on the floor in silence. The ten-year-old explains, "There's no food to make dinner with."

Milka walks over to the refrigerator and opens the door. It's completely empty except for a half can of corn. Milka, the seasoned veteran, can hardly hold back her tears.

Milka's paintings, by contrast, are sedate. Chairs, stools, and easels sit calmly in their places. As Milka explains her series of doors and portals: "I love the Biblical story of Ruth and Naomi, especially the verse, ‘Wherever you go, I will go.' Wherever a person goes, she has to pass through a door or a passageway of some kind. So I looked for all kinds of openings that express ‘the place I'm going to.'"

Milka's own favorite shows a heavy wooden door slightly open. The light from the other side is visible, casting a single ray of illumination onto the bare floor in the dark forefront of the canvas.

Without such optimism, she could neither paint nor dare to inject herself into the lives of the poor.

A mystery hovers over Milka's art show. How does she do it? How does a woman who spends her whole day helping desperate people find the time and the headspace to paint a serious body of work?

For Milka, her artwork is not a contradiction to her charity work, but rather a balance to it. "My art," she explains, "gives me a broader perspective, a deeper perspective, on life. It also gives me the strength to continue."

Despite, or perhaps because of, her hectic schedule as coordinator of Yad Eliezer and mother of eight children, Milka has carved out a sacrosanct space of six hours a week -- three hours twice a week -- when she goes to her rented studio, closes the door, and allows herself to be enveloped by her art. Milka is not only an artist, but also a respected poetess. One volume of her poetry has been published, and her poems appear regularly in the Hebrew newspaper, HaModia. And, on the side, she's a sculptress.

Milka's art, rather than being a mystery, is really the solution to a mystery: How can a woman with a feeling heart spend six days a week, every week for 20 years, delving into the depths of people's overwhelming hardships without burning out or becoming jaded? Her successful mechanism is a perpetual motion machine: Milka saves countless families, and her art saves Milka.

On Thursday nights, Milka stays up late cooking for Shabbat, so that she's free on Friday afternoons. Free to do what? She goes to the Cancer Ward at Hadassah Hospital and circulates among the patients, distributing cakes and good cheer. There she forges fluid friendships with patients who may be there to greet her the following week... or may not.

Now, during this period before the holiday of Purim, Milka is busy gathering and checking out new names for Yad Eliezer's Purim list of some 3,000 indigent families. One of the four mitzvot of Purim is Matanot l'evyonim -- to give a gift of money to two destitute persons or families. On Purim day, while the rest of us are feasting and celebrating, Milka and other Yad Eliezer volunteers spend the day phoning destitute families to inform them that an envelope of $100 (or sometimes more) is ready for them to pick up.

Milka is a good artist, but not a great one. There is, however, one masterpiece at her art exhibit: Milka herself.

You can do the mitzvah of Matanot l'evyonim by making a Purim donation to Yad Eliezer. Donate by phoning (718)258-1580 or by clicking on this link: www.yadeliezer.org

How A Breast Cancer Gene All Jews Should Know About Uncovered a Secret Connection
Megillah Gorilla Saves the Day
Challah Reuben “Grinder”
Big OnThe Little Things
Comments
MOST POPULAR IN Israel
Our privacy policy
Aish.com Is Looking for Great Writers