The Babe Ruth of Kindness - Ethics of the Fathers 1:5 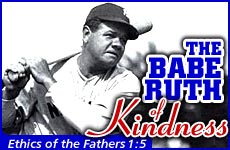 The Next World is the place to commune with God; this life if an opportunity to perform kindness to others.

Yossi ben Yochanon from Jerusalem said: "Let your house be wide open, and let the needy be members of your household, and do not over-indulge in light talk with your wife."

They said this of a man's own wife -- how much more so of his fellow's wife. Hence the Sages said: "Whoever over-indulges in light talk with a woman brings evil upon himself, and neglects the study of Torah, and ultimately will inherit Gehinnom."1

Ethics of the Fathers 1:5

"Hello," you say, picking up the phone.

"Hello. This is the President of the United States."

Yes, it's George W. himself. No joke. And he sincerely wants to know how you're doing, what you think about life, how he could be doing a better job.

In the middle of the conversation, your front doorbell suddenly rings. You peek out the window and see a few bedraggled beggars.

What do you do? You have the President of the United States on the line and some complete strangers knocking at your door. Do you hang up to tend the visitors or keep talking and make believe the doorbell didn't ring?

Well, if you want to emulate Abraham, our forefather, you would say, "Excuse me, Mr. President, sir. It's been nice talking to you but there's a couple of transients at my door and I have to tend their needs. Have a nice day."

And God appeared to him [Abraham] in the plains of Mamre; and he sat in the tent door in the heat of the day; And he lifted up his eyes and looked, and, behold, three men stood nearby; and when he saw them, he ran to meet them from the tent door, and bowed himself to the ground.

Abraham was experiencing prophecy -- he was in direct communication with the Creator of Heaven and Earth. Then three strangers appeared. Nevertheless, without a moment's hesitation, he interrupted God to greet the strangers and make them an entire meal. From this passage our Sages derive the fundamental principle:

"Greater is hospitality to strangers than welcoming the Divine Presence."

This, too, is the great lesson of Yossi ben Yochanon in our Mishnah.

Life is short. The Next World is the place to commune with God; this life is an opportunity to perform kindness to others. And that explains why Judaism begins with Abraham, the Pillar of chesed, loving-kindness. Abraham was the archetypal do-gooder. He was the Babe Ruth of hospitality and kindness.

Abraham's greatness was not just that he discovered there was one God but the implications of that discovery as well.

People often make the mistake and consider Abraham "merely" the founder of monotheism, in effect relegating his discovery exclusively to the intellectual sphere. However, Abraham's greatness was not just that he discovered there was one God but the implications of that discovery as well: namely, that the Creator of the Universe was a Being of unlimited kindness.

Abraham observed that the world was supplied with every kind of luscious food and fruit, with every kind of spice, every fragrance of odor, every pleasure of color and sound, and innumerable other forms of physical enjoyment, in addition to the countless forms of spiritual pleasure and happiness. Abraham's discovery of monotheism went hand-in-hand with the realization that the Creator epitomized chesed, and therefore to be made in this Creator's image meant to possess an instinct for kindness that was likewise unlimited.

As a result, he dug wells for wayfarers (Genesis 21:25, 26:15), gave them lodgings (Sotah 10b), and planted trees (Genesis 21:33). The word "tree" in Hebrew, aishel, is a combination of three Hebrew words: achilah, shtiyah and linah, meaning "eating, drinking and lodging." Abraham looked at a tree and saw a hotel. He realized if the Creator created a world of ready-made "hotels" for itinerant strangers, then he too was obligated to make his home such a dwelling place.

However, Abraham realized that the greatest kindness of all was to inspire and inculcate others with his awareness (read: love) of the Creator who provides for all humanity. Thus, as Maimonides explains, Abraham collected thousands of people wherever he went and taught them about the existence of God. Moreover, his tent had openings on all four sides, i.e. it was bristling with guests all the time. And not only Abraham -- the Sages teach that while in the city of Haran, both Abraham and Sarah were busy teaching people about God. The foundation of Judaism is the home of chesed epitomized by the lives of Abraham and Sarah.

LIVING IN THE DIVINE IMAGE

"The world was built on kindness [chesed]" (Psalms 89:3). The purpose of creation is to allow for the possibility of one entity to bestow kindness on another. Nowhere is this potential more poignantly expressed than in the love between a husband and a wife. That makes marriage, in its highest sense, the forum for giving vent to the Divine Image latent in each of our souls.

Married life is a litmus test for determining the sincerity of our kindness to others.

Giving is a reflection of our innate divinity. We want to give because the Divine Image within each of us is aching to express its nature. Marriage is the act of imitating God as a bestower of goodness onto another.

At the same time, marriage is the arena where this innate divinity is tested more than any other. The verse says: "Therefore a man leaves his father and mother and cleaves to his wife for them to become one flesh." Judaism teaches that a husband and wife were originally one soul (Zohar, Tazria 43b). If so, why the emphasis on becoming "one flesh"?

The answer is that while in a soul sense a husband and a wife are one, in a bodily sense -- in "flesh" -- they are two. The "flesh" is naturally predisposed toward selfishness, egocentricity, competitiveness, jealousy, etc. That's why the verse emphasizes that the goal is specifically to become one flesh. If husband and wife learn to cooperate with each other as one flesh, then they will naturally come to experience the primordial state of being one soul. If they do not, then even if they are "soul-mates" their marriage will not necessarily be smooth or happy.

Married life is a litmus test for determining the sincerity of our kindness to others. Often we hear of people known for doing great things for others, only to later find out how cold or unkind they were to their spouse and/or loved ones. As more information comes to the fore, the more we discover the extent of their hypocrisy.
By contrast, the more you look into the life of a truly saintly figure -- consider the Chofetz Chaim for example -- the you more you find that the acts of kindness he performed with his wife were even greater than previously imagined. As much as a pillar of kindness he was to strangers and the outside world, he was even more so to those closest to him.
How you rate as a being fulfilling your Divine Image starts with your track record in the home to those closest to you.

If so, our Mishnah's teaching is surprising: "And do not over-indulge in talking with one's wife." Is Judaism a religion that tells husbands to ignore their wives?

The answer is of course not. And the key to understanding is the word our Mishnah uses for "talking," -- which is "siychah." Just as the Eskimos have many words for "snow," Judaism has many words for "speech." Siychah is a word for speech related to the root sachah, meaning to "swim" or "float." Rabbi Aryeh Kaplan (Meditation and the Bible, p. 103) describes siychah as a form of "unstructured meditation," i.e. mental speech, where the mind is "allowed to wander." Siychah, then, is a type of light, free-flowing speech where whatever comes into the mind is expressed without much censoring.

In Talmudic times, there was a national crisis and the Sages asked Rabbi Elazar ben Azariah to take over leadership of the nation. The first thing he told them was, "I have to ask my wife" (Berachot 27b). Good communication between husband and wife about weighty matters has no restrictions and is an absolute necessity in the well-functioning Jewish home.

Our Mishnah, on the other hand, is concerned specifically with the over-indulgence of siychah, "light talk." There is certainly a place for "light talk." Each couple, in their own way, will find the right balance between "heavy" talk and "light." Every couple needs to be light at times and have fun with each other; it's part of a healthy relationship.

What's unhealthy is when such talk is over-indulged in. And certainly if it is the only type of talk the couple engage in.

This is also why such talk -- flirting, if you will -- can be so destructive outside a marital relationship, which is an all-too-common issue in the contemporary workplace. If unchecked, it can create a momentum between a man and woman that causes them to descend into a dark moral abyss (Gehinnom) that they cannot easily extract themselves from. Before they know it, they're caught in the undertow.

Siychah has a place, but it's dynamite. Be careful when you play with dynamite.


1. Gehinnom refers, generally, to a limited-time experience (Edyos 2:10) in the afterlife where the soul is purged of its blemishes. The name "Gehinnom" comes from the valley to the south of Jerusalem, known as the Valley (Gei) of the son of Hinnom, where children were at one time sacrificed to the idolatrous cult, Molech (II Kings 23:10; Jer. 2:23; 7:31-32; 19:6). For this reason the valley was deemed accursed, and Gehinnom thus became a synonym for Purgatory.
Back to Text

Eaten Up with Envy

The Relevance of Prayer: Ethics of the Fathers, 2:18
Scientific Curiosity and the Divine Encounter
Mind Over Milkshakes
Love the Convert
Comments
MOST POPULAR IN Spirituality
Our privacy policy
Aish.com Is Looking for Great Writers