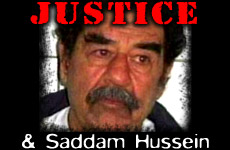 There will be no justice for Iraq's former ruler.

President Bush and members of Iraq's governing council vow that Saddam Hussein will be "brought to justice" in a trial that meets the civilized world's standards of fairness. But let us be honest: There will be no justice for Iraq's former ruler.

To be sure, his judges will approach their task conscientiously and with dignity. He will be defended by competent counsel, who will be given the time they need to make their case. Witnesses for the prosecution will be subject to cross-examination. And if Saddam is convicted, he will have the right to appeal.

What punishment could possibly fit the crimes of a monster like Saddam, who is responsible for the murder and torture of hundreds of thousands of human beings?

Nonetheless, justice will not be done. Not in any courtroom in Iraq, not in any courtroom on earth. How could it be? The very worst outcome Saddam is likely to face is a hanging or execution by firing squad. For a killer with the blood of one or two or 10 innocents on his hands, such a punishment might reasonably be said to fit the crime. But what punishment could possibly fit the crimes of a monster like Saddam, who is responsible for the murder and torture of hundreds of thousands of human beings?

The liberation of Iraq from such mind-curdling horror was a profound moral achievement. It marks the fourth time in little more than a decade that the United States has freed Muslims from terror and totalitarian cruelty. To see Saddam being led from his pit, haggard and filthy and looking like a bus-station wino, was deeply satisfying, and no one relished it more than the Iraqis he had enslaved for so long. "The Fall of Saddam is Complete and the Sun has Returned to Shine on Iraq" was the headline Monday in Al-Zaman, Iraq's leading independent daily.

But not everyone is rejoicing. "The capture of Saddam has not made America safer," Howard Dean sulked, and there was mourning in Gaza City and Ramallah, where so many had danced on Sept. 11. The moral obtuseness extended even to the Vatican, where one senior official -- Cardinal Renato Martino, head of the Pontifical Institute for Justice and Peace and a former papal envoy to the UN -- expressed his "pity" for Saddam. "Seeing him like this, a man in his tragedy, despite all the heavy blame he bears, I had a sense of compassion for him."

It will be one purpose of Saddam's prosecution and trial to make it searingly clear, even to the Deans and Martinos of the world, that the US-led war in Iraq was a great blessing. It brought to an end one of the most evil regimes in human history -- and did so in the teeth of thunderous opposition. If it is organized properly, the trial of Saddam will lay the vast record of his sadism and bestiality before the world. For the first time, the tyrant's victims -- those who survived -- will have the chance to appear on the world stage and speak of Saddam's inhumanity to a rapt international audience.

And, no less important, they will do so in Arabic -- a crucial element in the war to pull the Middle East out of the dark ages.

It is Saddam and his accomplices who will be in the dock at the Baghdad Trials. But in a sense, those who willingly turned a blind eye to their crimes will be on trial, too -- the politicians and intellectuals and journalists and businessmen who preferred to overlook or excuse the savagery of the Ba'athists. The trials will be embarrassing to many in the antiwar movement and in the French-German-Russian "Axis of Weasel" who worked so strenuously to keep the United States from toppling Saddam. They may also embarrass the US government, which for a long time was among those that ignored Saddam's butchery. That history, too, should be brought out at trial.

At the trial of Saddam, as at the trial of Adolf Eichmann in 1961, the prosecutor will not stand alone. With him will stand hundreds of thousands of silent accusers -- the men, women, and children whose voices were forever stilled during the long nightmare of Saddam's reign, but whose blood has never ceased crying out from the ground.

Why Were Comments Disabled on My Last Article?