Even I'm Worthy of Miracles 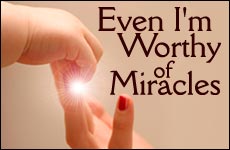 A true story about the power of a blessing and modern day miracles.

As a returnee to Orthodox Judaism it was sometimes hard for me to dispel with the outsider-looking-in feeling. Everyone I knew seemed to be more pious, more of a believer, more at home with their level of observance than I did.

In one thing, though, I was confident. I chose to build my home in Israel in a spot with wonderful neighbors.

Across the street lived a renowned Torah scholar and leader of the Jewish people. Behind my house was a special, friendly and outgoing neighbor who had two sons -- born 12 years apart.

I made aliyah with four children after recovering from a serious illness. I was so thankful for all I had but I suppose it was no secret to anyone that the thing I was hoping for, dreaming of, was another child to complete our family.

My youngest daughter wanted to be a big sister so badly. My husband and I had always talked about having a large, boisterous gang of kids, but my illness had put these grandiose plans on the back shelf.

My new neighbor confirmed my feeling that we were living in miracle territory. She had asked a visiting rabbi for a blessing to have a child and he insisted that he would pray for her if she, in turn, would pray for his seemingly barren daughter. That meeting had taken place in my house many years before.

Well the power of prayer is such that both women had children on the same day. My neighbor now had two sons, in spite of her infertility problems, born twelve years apart.

I often heard the rabbi mention the idea that a child born to a barren woman is the greatest open proof of God's involvement with the world, and here was my neighbor living this very miracle. I loved her thankful, positive attitude. I thought it was wonderful that she prayed over her candles every Friday night for babies to be born to others. She had a long wish list of names.

After living in Israel for a number of years, we began to build a house. My youngest daughter was then ten years old. When my neighbor came in to have a look at the construction, she said, "This spot will be perfect for the crib." I was taken aback. Was this a blessing or gross insensitivity? A joke or a simple lack of attention to the facts?

I was getting older every year with no baby in sight. Finally, I fell ill again and was hospitalized. The doctors had a special meeting with me. "It is impossible for you to have another child," they explained.

As I had recuperated at home, I directed my prayers for others to have children and stopped thinking about my own desires. My neighbor provided me with a list of names.

Every Purim I went with the other women of the congregation to get a blessing from the rabbi. It was a special experience. I couldn't hear the words he uttered but that was unimportant. I was so happy to be there.

Another two years had passed and my husband was off visiting in the States. My routine gynecology check up went well. I was obviously going through early menopause but my doctor saw no abnormalities. I went for a routine ultrasound and explained to the technician that I was menopausal, and that the doctor just wanted to make sure all was well.

Imagine my reaction when the technician assured me that I was indeed going through menopause, but "not this year." There was a fully formed baby on the screen. I was almost six months pregnant and hadn't had even one bothersome symptom. For once in my life I was speechless.

I laughed the whole way home.

Yes, it was a high risk pregnancy which might have been terminated had it been discovered earlier. I had specialists attend to me, but the pregnancy was absolutely uneventful and the natural childbirth was swift and normal. We had barely had time to get used to the idea, and there she was -- our only Sabra -- born in Jerusalem on a gorgeous, sunny day.

We named her Emunah, which means "faith" in Hebrew.

She and her big sister were exactly 12 years apart.

"This is my bat mitzvah present Mommy!" said my daughter. "I prayed for her to come to us for so many years." She couldn't have been happier.

There I was, a simple, ordinary woman, standing right in my neighbor's extraordinary shoes.
As a result of my experience, my inner landscape has changed. When I notice another Jew I bless them in my heart, I wish them well and hope wonderful things for them. If my friend is poor, I pray for them to find wealth as uncountable as the waves of the ocean.

Why not? Such is the power of a blessing.

At Death’s Door in a Foreign Land

My Family’s Life-Changing Summer in Israel
It Takes A Lot Of Faith To Be An Atheist
How Instagram Brought Back This Nostalgic Soup
What Makes Eli Run?
Comments
MOST POPULAR IN Spirituality
Our privacy policy