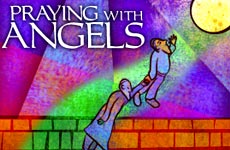 Hitching a holy express ride at the Western Wall.

I've been to Israel some 40 times and on virtually every trip, I try to steal away from all the appointments, obligations and engagements to spend a few moments absorbed in prayer, study and meditation at the Western Wall.

The Western Wall is many things. Archeologically, it is the 2,000 year old, last surviving remnant of the most important and most holy of Jewish sites: the First and Second Temples. Politically, it is a thorn in the side of revisionists, who vociferously allege that Jews have no historical roots in the land of Israel. Religiously, it is the place where an individual's tarnished relationship with the Almighty can regain its luster. Historically, for at least 1,000 years, every praying Jew faces the Temple Mount, thereby making it a virtual and literal focal point.

On this particular Monday morning, I found myself particularly lost in thought as I prayed the traditional Morning Prayer service within inches of the Wall. The February sun tugged at the clouds and a soft breeze blew chilly. I consciously attempted to envelope myself in the cloak of the many, many millions of prayers which hung over this place. Exhausted prayers, bordering on hopelessness, which had emanated from behind the barbed wire fences of Auschwitz. Prayers of intense happiness issued from the overjoyed lips of first time parents. Desperate prayers said around the world for the speedy recovery of bus bombing victims. Ancient prayers from long, long ago crying over the destruction of the Temples and the human carnage left in its wake.

Like a kite, I willed my own little prayer to catch a ride and be carried aloft to reach the heavens on the powerful updrafts of the amazing supplications preceding it.

And suddenly it was all gone.

The intensity, the passion and concentration came to a screeching halt when a particularly raucous group of worshippers came out of nowhere and had the audacity to pray so noisily behind me that our service was almost completely drowned out by theirs.

Not only were they loudly encroaching on my space but they were saying the wrong prayers. They were singing Sabbath hymns on Monday! And if that wasn't bad enough, the offenders -- grown men all -- began to sing a Jewish alphabet song in the middle of their so-called prayer service!

I spun my head around with every intention of giving my uncouth neighbors the benefit of an angry stare, when I suddenly noticed who these people really were.

Finding myself completely unable to concentrate, I spun my head around with every intention of giving my uncouth neighbors the benefit of an angry stare, when I suddenly noticed who these people really were. Nearly a third of them had Down's syndrome. Of the rest, about half were clearly recognizable as developmentally disabled adults.

An old Chassidic story I once heard instantly sprang to life inside my head.

It was the eve of Yom Kippur and in this particular European shtetl (a small, overwhelmingly Jewish town in Eastern Europe), it was traditional for the Grand Rabbi to open the years' most solemn prayer service with a fiery sermon of repentance. But on this particular year, the saintly Rebbe stood at the podium and to his dismay found that he could not mouth even a single word.

Plainly disturbed, the Rebbe tried again but the words would not come. He then motioned for the congregation to wait. Out of respect and love for their Rabbi, they waited for what seemed to be an eternity.

After the impossibly long delay, the synagogue's massive doors swung open wide and in walked the town's deaf-mute. Without breaking his stride, the young man raced to an empty seat, sat down and promptly began to whistle.

"Shhh…. quiet down!" they yelled at the boy, but he, of course, could not hear them. So he continued to whistle and the congregants continued to rebuke the young man in escalating tones. At this point the Rebbe rushed to the podium for a second time and told the congregants that the delay was now over and the prayer service should commence immediately.

Puzzled as to how what had just transpired broke the impasse, the congregation was none the less eager for the evening to move along. The Evening Prayer was appropriately recited and immediately afterwards the Rebbe was surrounded by disciples eager to know what the delay had been all about.

"A terrible edict had been issued in heaven due to the inequity and lack of unity among our people," said the Rebbe. "The decree was so powerful that I knew that all of your prayers would not be adequate to overcome it. So I delayed the start of services this evening, hoping that some great merit would materialize and allow our prayers to save us from harm."

Lowering his voice, the Rebbe continued. "When the boy walked into the synagogue tonight, he did so in reaction to an overwhelming urge to be one with his people in supplicating the Almighty on this holiest day. Being a deaf-mute he could only pray by whistling his beautiful, soul-felt prayer. And having never disparaged another human being by speaking against them, his was the only absolutely pure prayer in the room tonight. As soon as he was done I rushed to begin the services so that our lesser supplications would somehow follow directly behind his as they smashed through the otherwise closed gates of heaven."

I, too, had been seeking a lead prayer to enhance my own entreaty before God. And here I was getting all worked up about the noise and my own discomfort when, in fact, all God was doing was sending me the purest souls anywhere in the universe with whom to hitch a holy express ride at the Western Wall.

I realized that too often we not only fail to see blessings which are divinely extended to us, but are in fact bothered by inconvenience with which it is sometimes bundled.

I stopped to shake each one's hand and to thank them for being such wonderful, if thinly disguised, heavenly angels of mercy.