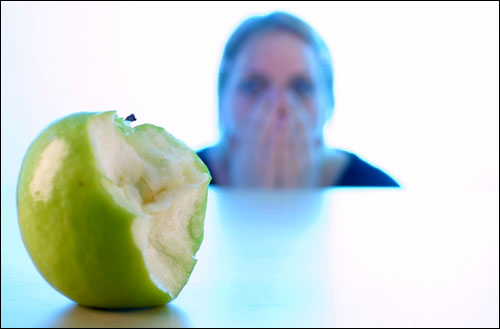 I was determined to indulge my non-kosher craving. But God had something else in mind.

In the Torah we learn of the three angels who come to visit Abraham and Sarah (Genesis, chapter 18). To all outward appearances, the angels are three men on a journey, and Abraham receives them the way he would receive any mortal guests. Only later does he – and we – realize that the men are really messengers from God – they are angels.

One of the many things we can learn from this narrative is that sometimes what may look like an ordinary human being is, in reality, an angel. To illustrate this concept with a personal example, I will take you back to a time – about three decades ago – when I had recently started to keep kosher. This was a very difficult thing for me to do. I had already been keeping Shabbat and many other mitzvot for a long time, but keeping kosher was the biggest hurdle of all.

I was constantly beset by temptations and cravings for dishes that were no longer on the permissible menu, and finally I thought I would follow what the Talmud says regarding a person who is possessed with the urge to sin. If he can no longer contain himself, let him put on dark clothes, go to another city where he will not be recognized, sin, and be done with it. This is definitely not what the Rabbis recommend, or even sanction, but if need be, the Evil Inclination will even pervert the meaning of the Talmud in his campaign to ensnare us. I kept thinking, Just once, just one last time, to kiss it goodbye.

So I went, not to another city, but to a big, anonymous supermarket in another neighborhood, in pursuit of the forbidden fruit. As I approached the counter where the desired item was sold, I suddenly caught sight of two Jewish women of my acquaintance, who were standing right in front of that counter. They were deeply engrossed in conversation and blocking my path. I was well known in the Jewish community of my home town, and I was certainly not going to let anyone know about my embarrassing culinary proclivities!

I decided to bide my time. I wandered off and bought some vegetables and then tried again, but the ladies had not moved from their spot. I made another round. Still there! This kept on for quite a while, until, at long last, the coast was clear; I could make my purchase and retire home to my guilty pleasures.

There was still one more dish I was hankering after like mad. The next day I decided to get that out of my system as well, with one final indulgence. But this time I was determined to be smarter, so I went to a suburb, to a supermarket where I never normally shopped, certain I would not encounter any familiar faces.

As I was sitting there on the bus, bound for my unlawful goal, minding my own business, a woman suddenly plonked herself down on the seat next to me. “Hello!" she said, "how are you?”

What do you know – it was the mother of one of my bat mitzvah students. We talked, and when I got off the bus she did too, and I suddenly realized that she actually lived in this suburb. Great! As “luck” would have it, she was also bound for the food market. Super! We walked along the aisles, filling our baskets with various – kosher – products, and the woman didn’t budge from my side! Finally we passed, together, through the cash register, and only outside on the sidewalk did she leave me alone. She said goodbye and walked off, and I returned to the store, bought what I came for, and headed back home for my illicit party.

And then it hit me.

If I had lived in Biblical times, I might have described these events a little differently, maybe something like this:

“And it happened in those days that I walked upon the path of iniquity. But behold – two angels of the Lord appeared before me. And lo! The angels spoke unto me and they said ‘Get thee hence, be gone from this abomination, and run not after the lust of thy heart!’ But alas, I heeded them not, and I sinned. And on the second day I followed my evil desires anew. And behold, the Lord sent an angel to walk with me and lo! The angel spoke unto me and it said ‘Woe is thee, that thou runnest after the lust of thine eyes! Walk with me on the path of righteousness.’ But alas and alack, I hardened my heart and I heeded it not, and I sinned.”

In those days people – even sinners – were more finely attuned to Divine messages, and when it pleased God to send them an angel or two, they sat up and took notice.

I cannot describe how devastated I was when I realized what had happened. These three women had come in my way for a purpose; they had been messengers from God. The women were clearly angels that He had sent me in order to prevent me from transgressing, and their very presence “spoke” quite eloquently to me. God had made every effort to keep me on the right path, but I had not been receptive, I had not listened to the message. The worst thing was not that I had eaten forbidden foods –bad enough as that was – but that I had turned a deaf ear to God and “hardened my heart.” That was what crushed me. (Need I say that I never ate treif again?)

So it seems that we can all be angels, at times through an act, a word, or even just a smile that is bestowed when one is needed. Sometimes, though, as in the case of my three "angels," all it takes is to be in the right place at the right time. If we can remain conscious of this, it is one of the things that can make our lives very meaningful – to know that even when we are committing no heroic acts we may still, at any moment, be the emissaries of God, carrying within us the message that can change another person's life for the better.

Shulamit is an empty-nester mother and wife with many creative interests and a vocation in the non-profit sector. A long-term ba’alas teshuva with European roots, she lives, works and thrives in a frum community somewhere in the US. More of her musings can be found at http://shulamitstent.blogspot.com

This Yom Kippur, Enter a Radically Different Place
It Takes A Lot Of Faith To Be An Atheist
How Instagram Brought Back This Nostalgic Soup
What Makes Eli Run?
Comments
MOST POPULAR IN Spirituality
Our privacy policy