Should We Not Dance? 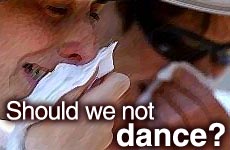 A Jerusalem resident's personal reaction to the bus bombing.

A few years ago, a close friend's wedding was nearly ruined by a surprise rainstorm. Instead of being held in the posh resort's breathtaking gardens at dusk, the kabbalat panim, pre-nuptial reception, was stuffed into the hotel's interior. Despite the bride's initial dismay, it ended up being lovely.

Last night, an acquaintance got married in the midst of another storm. A few blocks from where she sat in the bridal chair stood the twisted wreck of the 14A bus on which, an hour before, 17 Jews were murdered. As she and her now-husband stood under the chuppah, a half a dozen others were fighting for their lives and dozens and dozens more were in hospitals with untold injuries.

We heard one ambulance, and then another, scream down the main thoroughfare two blocks from us.

I had heard about this latest attack minutes before it was on the news. I was just about to walk out the front door of my office when our receptionist's cellphone rang. Her boyfriend was calling from his apartment in the center of town -- he'd heard the blast a few hundred feet from their building. When I heard her say the word "p'gua," terrorist attack, I looked up and our eyes locked for a moment, as we heard one ambulance, and then another, scream down the main thoroughfare two blocks from us.

Oh God, oh God, oh God, my voice wailed inside my head. I rushed back to my office to check the news on the web. I was petrified. My reactions to attacks follow no logic or predictability. Sometimes, I stoically bite my lips, say a prayer for the victims and their families, mutter that I hate terrorists, and go about my day. And then sometimes I just can't stop thinking about it, and my body fills with grief and heartache so overwhelmingly strong that they seem like physical sensations while my head swims with a sense of astonishment that such evil walks among us undetectable -- until it turns a pleasant early summer evening into a bloodbath.

Yesterday was one of the latter, but it was much worse than usual. I sat in my office for an hour hitting the "refresh" button over and over, watching the reports come in, and the number of casualties mount, so engrossed that I neither took off my sunglasses nor turned on my overhead light.

I sent my customary e-mail to family and friends abroad reassuring them that I hadn't been anywhere near the bombing. Then did the obligatory Israeli thing: I started calling all my friends' cellphones to make sure that they were okay, even though everyone knows that cellphone service gets shut off after big attacks so that emergency service personnel don't have problems making calls.

It's a strange thing the way our minds work -- we can convince ourselves that this bombing or that attack won't affect us, because no one we know would have been there, not at that time anyway, not on that day… But yesterday, I couldn't. The bombing was at a well-traveled spot; anyone who's lived here for long knows it well. I used to ride bus 14 most days, so I know it particularly well. I realized that two of my close friends might have been on it, so I kept calling their cellphones, over and over, even though I knew full well that the cellular networks were down. But I just kept dialing, again and again and again.

This latest act of terror dashes even the hope that there might be hope.

It's an apt metaphor for what it feels like to be living in Israel right now. Forget the usual Israeli stoicism. Everyone, it seems, was affected deeply by yesterday's bomb. Even though few people here really thought that the latest effort to restart the "peace process" was particularly promising, this latest act of terror and hatred dashes even the hope that there might be hope. We just keep dialing and dialing, hoping that, even though we know the network is down, someone might answer.

I hadn't thought about the girl I knew who was getting married until a friend called me this morning and told me that she had a hard time getting to the wedding because the main road was closed to traffic. They got there late, but not before they saw the hulking ruin of the bus with the body bags piled beside it. Traffic was routed in such a way that everyone going to the wedding -- the happiest night of the bride's life -- had to pass by the reminder of dozens of lives ended and blown apart, the tangible evidence that there are people here who hate ferociously and without bounds.

"My God," I sputtered. "Was the wedding horrible? How did you manage to dance?"

"I don't know," she said, honestly. "We did it. The wedding was beautiful and she was radiant, even though everyone knew exactly what was going on around the corner. But what should we do? Not dance?"

The history of the Jewish people -- ancient and modern -- is carved into the streets of Jerusalem, and into every glade of this beautiful land. This is where Jordanians killed the defenders of the Old City in 1948, which paratroopers liberated the Western Wall in 1967. It is where King David reigned in glory, and where we suffered horribly when the Temples were destroyed. North of here, there is a small Jewish community in Shilo, where the Tabernacle stood for 300 years. Two thousand years ago, Jews minted coins on the Golan, the same place where, 30 years ago, Israeli tanks fought fierce battles to stop the Syrians from shelling the kibbutzes in the valley below. In Safed, artists have stores along the cobblestone ways once home to the mystics who wrote the Zohar and kabbalistic works.

We are witnesses to history here, and the history of the Jewish people has never been easy. For 2,000 years, we've mingled laughter and tears.

"How long will You be angry against the prayer of your people?" asks the psalmist. "You feed them with the bread of tears, and give them tears to drink."

He continues: "Turn to us again, God. Cause Your face to shine, and we will be saved."

Yes, we're anxiously awaiting the moment for when we no longer eat the bread of tears, but we know -- deeply, resolutely -- that we have no choice but to continue dancing. And even if we have tears streaming down our face, every step we take will be filled with joy.

One Incredible Week in Israel

Every Soldier a Hero
In the Shadow of David and Goliath
Where Do the Laws of Nature Come From?
Saadiah Gaon, Rashi and Maimonides: How Three Rabbis Revolutionized Judaism
Comments