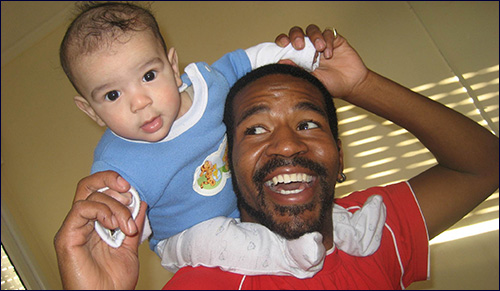 Marvin grew up in Chesterfield, Missouri, attending church most Sundays and participating in his church’s youth group. Even though he didn’t really appreciate the meaning of the ritual, at age 17, Marvin was baptized in the church. That was the way it was done and Marvin followed suit.

Marvin decided to leave religion all together and immersed himself with his other love: hip hop dance.

But one week after his baptism, he decided he’d rather work on Sundays. “I just didn’t connect,” he told Aish.com. “There were certain things that didn’t sit with me – I don’t know if in religion in general or in Christianity – that if someone doesn’t believe what I believe, something is wrong with them. I was getting turned off by what I sensed was a disrespect for other faiths. You can’t really make the world a better place like that.”

So Marvin decided to leave religion all together, entering what he calls his “atheist phase.” During this time, Marvin immersed himself with his other love: hip hop dance, on the dance floor almost every night. He would often come home at 2 or 3 in the morning, and wake up for the 7 am shift at his local Sam’s Club, and then attend classes at his local community college. 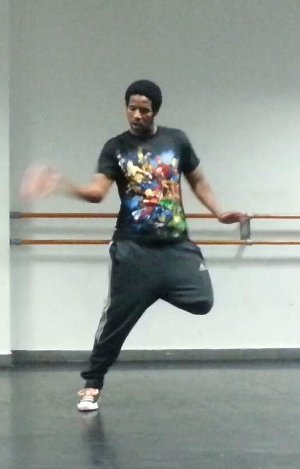 With his intense dedication, he became a performance dancer. “I was in love with movement,” he said. He eventually transferred to the University of Illinois to join the university dance team.

Although things were going well and Marvin was extremely busy, fundamental questions began to gnaw at him, leaving him feeling somewhat disconnected. “I needed a belief in a higher power to help me connect and to keep me humble. But I didn’t know what I really believed.”

Knowing the potential power of religion, Marvin began to research other faiths at the religion section at his local Borders bookstore, searching for some answers to life’s biggest questions.

Marvin had a number of Jewish friends growing up, and he often asked them philosophical questions based on the ideas he was reading at Borders. “What is the meaning of ‘kosher’?” he asked his friend Josh. His questions sparked lively debates and discussions, leading to more questions, sparking Marvin’s curiosity even further.

“In the Christianity I was exposed to, there is no real need to ask questions. If you love Christ, all your questions are answered. In Judaism, you are supposed to ask questions. That intrigued me and re-energized me. Judaism offered me faith and connection, but it was based on reason and a strong intellectual foundation.”

One day Marvin asked Josh, “Are you going to the Kabbalat Shabbat service this week?”

“Are you serious?” Josh retorted. “I was not planning on going.”

“Are you okay?” josh responded with concern.

A week later, Josh made a special trip to a synagogue for Marvin. Marvin was drawn in with the singing. Even this budding semi-professional hip hop dancer found the music “kind of cool.”

Marvin came back for Rosh Hashanah services and tried out another synagogue for Yom Kippur. “I remember standing in front of the Aron haKodesh and everything just felt right,” Marvin recalled.

A few weeks later, Marvin walked in to the office of the synagogue’s rabbi and asked to convert. “I know you are supposed to turn me away three times, so I’d like to get that part out of the way.”

Marvin began taking numerous classes on the practices and beliefs of Judaism. During the conversion process, Marvin experienced his share of awkward moments, prying questions, and uncomfortable stares. While his family and friends were fully supportive, that did not make the transition smooth.

Marvin forgot to take off the yarmulke. His buddies were looked at him thinking he was crazy.

At the time, Marvin would go to synagogue on Wednesday nights for the evening minyan and then he’d take off his kippah before heading out to dance with his hip hop buddies. They did not know he was in a conversion process. One night, he was running late. That particular evening, he forgot to take off the yarmulke. His buddies looked at Marvin like he was crazy.

“What’s that thing on your head?”

“A yarmulke,” Marvin replied, as he quickly removed it and stuffed it in his pocket.

His friends immediately responded, “You don’t need to take it off in front of us.”

Marvin eventually decided to stop going out on Friday night and to partially observe the Sabbath. At this point his friends were so understanding he wasn’t nervous when he told them, “Guys, I know Friday night is our big night, but I can’t do it anymore.”

While it took them a while to learn and get used to his new customs, they supported Marvin however they could, even providing him kosher food at barbeques and birthday parties. His parents made the same accommodations.

Marvin delved into the intellectual side of Judaism. “I love to be intellectually challenged.” The aggressive questioning and independent inquiry in Judaism – balanced by its ironclad moral principles – appealed to both the bookworm in him and to the artistic young free spirit.

He also fell in love with Shabbat. “It’s my time to breathe and not worry about work or about being anywhere other than the present moment.”

Three years after his conversion, Marvin – now Yisrael Moshe – made Aliyah, moving to Israel in 2006. When the plane landed at Ben Gurion Airport, he froze. “I didn’t want to get off the plane! I had a moment where I had second thoughts, the change was too drastic. Making Aliyah is challenging enough, even more so for a black man who didn’t grow up with any Hebrew, with few Jewish friends, and with little Jewish culture. But I decided to stick to my path and with joy and trepidation, I got off that plane.”

“I didn’t want to get off the plane! I had a moment where I had second thoughts, the change was too drastic.”

Beginning his new life in Israel, he received many looks and questions: “Why did you move to Israel?” “Are you Jewish?” There were times people didn’t know whether to count him in their minyan. “I think white converts have an easier time blending in and don’t get the same questions that I did.” To this day, there are times Yisrael doesn’t know if he is being counted.

Nevertheless, he adapted. He joined a major institution in Israel that brings Jews together: the Israel Defense Forces. The military is often called “the melting pot of Israel.” Yisrael is a case in point.

He met Jews who spoke Russian, Spanish, French, English, and Hebrew. He met fellow soldiers of Ethiopian, Ashkenazi, Sephardi, Orthodox, secular, and traditional backgrounds. There were times Yisrael would find comfort socializing with other English-speaking soldiers, but when it came time to do the job, he says, they were all brothers. His army experience showed him how “so many facets of the Jewish people can co-exist in one place.”

Today, Yisrael lives with his wife Oshrat – a Morrocan-Israeli – in Ramle, Israel, with their two year old son and a five-month-old daughter.

Yisrael teaches English at a high school by day, and teaches hip hop to various clients at night – including some of his rabbis. One of his most rewarding moment in his hip hop career came when he volunteered to teach a group of children with special needs in Ramle. One 10-year-old student with Downs syndrome would never dance. She would hide under the table as Yisrael would turn on the music. 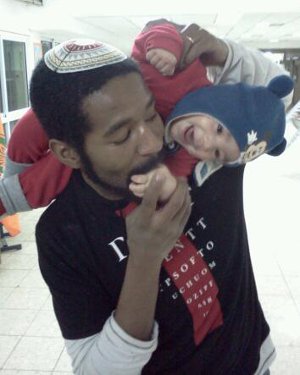 When the mother identified herself, Yisrael responded with bewilderment. “Why are you thanking me?” he asked. “Your daughter always hides under the table.”

The mother explained, “When my daughter comes home every day, she turns on music and dances all around the house. She had never been so active but now she is.”

“That little girl taught me that someone is always paying attention to you. No matter what, someone is listening.”

A Jewish Child on Christmas
Extras In Our Own Epic
Evolution 2.0: The Coming Darwinian Revolution
Chukat 5782: Let’s Play the Blame Game!
Comments
MOST POPULAR IN Spirituality
Our privacy policy