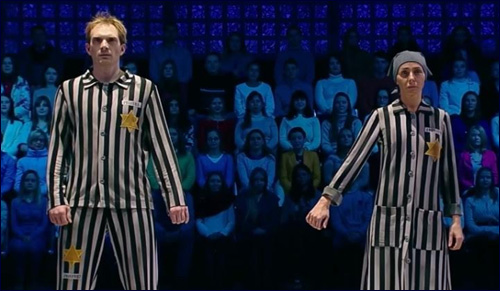 “Not one of the six million danced and a concentration camp is not a summer camp.”

Holocaust on Ice? Hard to believe, but that’s what was featured on the popular Russian reality show, “Ice Age,” featuring Olympic gold-medal skater Tatiana Navka and actor Andrew Burkovsjy who performed a dance in concentration-camp-style uniforms with yellow Jewish stars prominently pinned to their clothes. They smile at each other lovingly as they skate around the rink, dancing to the song “Beautiful That Way” (recorded by Israeli singer Achinoam “Noa” Nini) as the audience applauds. At the end of the routine, the man cheerfully waves goodbye and exits to the sound of machine guns.

It’s a grotesque inversion of the Holocaust, almost unbearable to watch. Yet this bizarre depiction of happy Jewish concentration camp victims is the latest cultural offering depicting the Holocaust, and affecting the way we collectively remember. 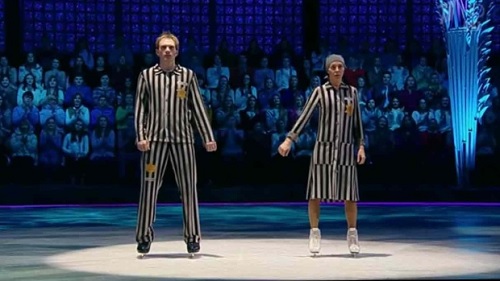 “Definitely watch this! One of my favorite numbers!” the skater Tatiana Navka posted later on her Instagram account. The former Olympic ice dancer is married to Dmitry Peskov, a presidential spokesman. Apparently the ice dance was a way to educate people about the Holocaust today, Ms. Navka posted on social media. Russian news outlet RT explained the dance was meant to “celebrate human dignity and spirit”.

Many complained the routine was in poor taste. Israeli Culture Minister Miri Regev spoke for many when she said, “Motifs from the Holocaust are not for parties, not for dance and not for reality (TV). Not one of the six million danced and a concentration camp is not a summer camp.”

Yet others praised the ice dance, explaining it’s a homage to the 1997 Italian film Life is Beautiful, in which parents pretend that the horrors of a concentration camp are only a game to their child. “Our children should know and remember this terrible time,” Tatiana Navka posted. Ilya Averbukh, the dance’s Jewish choreographer, agrees. “I have done a lot of routines on the war and Jewish themes,” he explained.

“I don’t understand such a reaction,” Andrei Burkovsky told Russia Today. “The negative hype around our performance is unjustified.”

The controversy echoed debates surrounding Life is Beautiful when it was first released. Many criticized the movie for not showing the horrors of the Holocaust; others praised it. Shlomo Venezia, a consultant on the movie who was interred in Auschwitz, explained at the time “The film as a whole works, particularly for the Italian mind… You could never show on film just what Auschwitz was really like.” Some even suggested using the movie as an educational tool, much as Ms. Navka has suggested about her ice dancing routine.

It is difficult to learn about the Holocaust. But there is no shortage of first-person accounts of what life was actually like for Jews in concentration camps that serve as excellent educational tools.

According to one 2014 poll, only 54% of people worldwide have ever heard of the Holocaust. Incredibly, nearly a third, 32%, of those who have heard of the Holocaust believe it’s been greatly exaggerated or is a myth. Ice dancer Tatiana Navka posted, “Our children need to know and remember that terrible time.” She’s right. But sadly, her distasteful ice dance routine misinforms viewers and profoundly misrepresents the Holocaust.