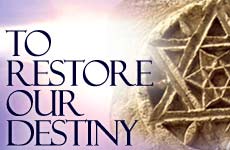 Israel Independence Day is the time to ask: Where have we been, and where are we heading?

For 2,000 years, the Jewish people were wanderers. We were exiled to every corner of the world, where we were oppressed, beaten and gassed. Yet in the process, something incredible happened: We defined the moral makeup of humanity. The so-called Judeo-Christian values that the civilized world takes for granted ― "monotheism," "love your neighbor," "peace on earth," "justice for all," "universal education," "all men are created equal," "dignity of the individual," "the preciousness of life" ― are all from the Torah. This is an enormous impact and we accomplished it under the most adverse conditions.

When the State of Israel was proclaimed, the world watched with great anticipation. Everyone knew that the Jewish state had the potential to change the course of human history. If the Jews had such an awesome impact despite the great difficulties of exile, then reunited in their ancient homeland they would surely transform the world!

The Jews reunited in their ancient homeland would surely transform the world!

Indeed, the first 50 years have been miraculous. The first generations of immigrants knew this was a historic opportunity and they were infused with a tremendous sense of idealism. Jews were willing to dig ditches in return for peanuts! The result? We've succeeded in building the finest hospitals, roads, schools and industry ― even amidst hardship, terror and wars.

But along the way something got lost. We got so caught up in building an infrastructure that in the process we forgot what it is we really came home to accomplish. The Jewish dream of a utopian society somehow became muddled in a hodge-podge of Western ideals. For example:

The Jewish system of jurisprudence is the basis for every great legal system in the world. The Romans derived their judicial system from the Torah, as did the Magna Carta and the U.S. Constitution. So you would think that in setting up the modern Israeli legal system, we would look directly to the Torah for guidance, framework and principles. But instead ― we adopted British common law!

The effect of this is devastating. Not only do we have a less effective legal system, but on a much deeper level, we have communicated a message to Israeli youth that "the Jewish way" is arcane, to be replaced by a more progressive, "non-Jewish" approach.

This communicates a message that "the Jewish way" is to be replaced by a more progressive approach.

This is just one example. But the point is that in the process of building the state, we have too often made tactical decisions that have devalued fundamental principles of Jewish life.

In Israel today, much of the idealism is gone because we're not really sure we want to be Jewish. What respect is there for the words of the Prophets, the Talmudic Sages or the rabbinic giants of today? One million Israelis are now living in the Diaspora because if life is all about McDonald's and MTV, then quite frankly there's a much better version available in Los Angeles!

So what do we do now?

We have to recapture our destiny, our sense of purpose. And that begins with a recognition that Tikkun Olam is the basis of what drives the Jewish people to greatness. It all started back with Abraham. His business was to go out and teach what it means to be "created in the image of God." He demonstrated how a human being has to take responsibility for the world. Abraham's undertaking was the first progressive, liberal movement the world had ever seen. And look how it succeeded!

Tikkun Olam is the Jewish legacy. In looking back at the first 3,000 years of Jewish history, we don't recall the names of any great entertainers or athletes or corporate executives. We recall the great teachers of the Jewish message: Moses, King David, Maimonides, the Vilna Gaon. That is the essential Jewish legacy. The message was engrained in our souls at Mount Sinai and it is the single defining characteristic of our people. To ignore it is to commit national spiritual suicide.

Whether you say our message is God-given or whether you say it was written by man is a separate issue. The fact is that humanity is thirsting for Jewish ideals.

And the world needs that message now more than ever. Just look at the institution of marriage. In Western society, the rate of divorce is over 50 percent. That's a crisis of immense proportion. Family structure is crumbling, and dysfunction in relationships is at an all-time high. And it seems that nobody has a clue how to stem the tide.

Not so long ago, "morality" was a dirty word. It implied an imposition of conscience and a curtailment of personal freedom. But today, the leaders of Western society realize that morality is the key to human survival. The great civilizations of Greece and Rome fell due to moral decay. Now our globe is increasingly more complex, and to navigate the maze we need solid moral direction.

The leaders of Western society realize that morality is the key to human survival.

Today, the great universities ― Columbia, Harvard, Hebrew University ― are investing hundreds of millions of dollars to develop curriculum for teaching "morality" to primary and high school students. They're scouring centuries of philosophical texts to try to find an effective approach.

Yet the answer is right in front of our eyes! Our very own Torah contains time-tested tools for personal and communal success: How to give and how to receive... When to be strict and when to be compassionate... Individual rights versus communal responsibility... How to show appreciation and respect... When to lead and when to follow... Balancing family and career... The boundaries of modesty in actions and in dress... How to listen and converse effectively...

Torah methodology is universal ― for Jews and non-Jews, religious and secular, Israel and the Diaspora, left and right. The Torah is alive and relevant for today. And for the Jewish people, the ability to effectively communicate this message is our single most important undertaking.

The world needs to know... and we need to teach.

Specifically, what does this have to do with making an impact in Israel today?

The problem, as we've defined it, is that Israeli society tends to follow American trends ― often giving more credibility to Western ideals than it does to Jewish ones! This is a situation which requires a solution.

In actuality, the effect in Israel can be far more revolutionary. Because in its essence, morality is a "Jewish" movement. It's the natural self-expression of a Jew. I've seen it time and time again: When a Jew is turned on to Torah, it sparks enthusiasm, energy and unbridled passion. Imagine an entire nation of Jews empowered to carry forth the Jewish message!

The Jewish people are experts in this field and we have an obligation to share. Not by yelling, nor by condemning. But by offering rational, relevant wisdom for living. This is precisely Isaiah's vision of "Light Unto the Nations." With technology, the world is far more reachable today than ever before. The message can go forth rapidly and effectively. As Isaiah said ― Ki Mitzion Tetzei Torah ― "for out of Zion shall come Torah, and the word of God from Jerusalem." How beautiful this would be!

Ultimately, the solution may come in some far different form. But one thing is certain: We must do something to turn this ship around. The State of Israel is hemorrhaging in terms of enthusiasm, idealism and commitment. Our challenge is to instill in each Jew a pride in our heritage, a confidence in our future, and an appreciation of how precious his involvement with the Jewish people can be for himself, his children, grandchildren, and all humanity.

Otherwise the State of Israel will have squandered its single greatest opportunity: to fulfill our destiny of Tikkun Olam.

We succeeded once. And with the Almighty's help, we can do it again.

An Old Story: Anti-Semitism, Past and Present
The Softball Player
How This 6 Generation Bread Baker Brought Back Israel’s Ancient Grains
Olivia Newton John’s Grandfather was a Nobel-Prize Winning Jewish Physicist
Comments
MOST POPULAR IN Israel
Our privacy policy
Aish.com Is Looking for Great Writers